A brutal storm rattled much of the Lawrence area Sunday morning, damaging homes, businesses and schools all over the city.

Straight-line winds with speeds of 70 miles per hour or more shook houses and knocked down trees and utility poles throughout the city. Transformers exploded and caught on fire as falling tree limbs ripped power lines from their posts, some hitting homes or crushing cars.

“I’ve never been through a storm that bad before,” longtime resident Karen Hawk said as she assessed damage to her house near South Park. “It changed my whole year.”

The widespread damage prompted Douglas County leaders to declare a state of emergency, sending a resolution to the Kansas Emergency Management department asking for assistance with the cleanup.

As of 9:30 p.m. Sunday, more than 5,000 residents were still without power – down from a high of 43,000 in northeast Kansas earlier in the day, according to Westar Energy spokeswoman Karla Olsen.

Olsen said 32 line crews, both Westar crews from throughout the company’s service area as well as contract crews, were working around the clock to restore service. Power is expected to be restored to all customers by this evening, she said.

The cleanup will become the priority for many today, as the city tries to recover after the worst storm in years.

Douglas County Emergency Management officials had been tracking the storm for about a half-hour when a sudden burst of straight winds tore through the city.

Storm spotters around the county had been relaying information to the county’s Emergency Operations Center, telling them about rain and hail. But county officials said nothing seemed very unusual, until the wind hit.

National Weather Service meteorologists told the county that regardless of several accounts of spiraling clouds touching down around town, there was no official tornado during the storm. But winds reached dangerous speeds as the storm traveled from 31st and Iowa streets northeast toward downtown.

Kansas University will be closed today for storm cleanup. Central Junior High and New York School will be closed, but all other Lawrence public schools will be open.

Several events around Lawrence were canceled Sunday and today because of the storm:
¢ Community Children’s Center Head Start, 925 Vt., is canceled today due to facilities damage.

¢ In the Lawrence public school district, there will be no classes today at New York School or Central Junior High School because of power outages.

¢ There is no KU on Wheels bus service today because classes are canceled.

All day, emergency crews were pelted with calls of downed power lines sparking grass fires and traffic lights either not working or no longer there.

Sgt. Susan Hadl said the Lawrence Police Department called in the night shift early and split up the duties, with the early crew handling storm-related calls and the night crew on regular duty.

“That helped, definitely,” Hadl said. “That way we could manage everything.”

Damage estimates should be in today after city crews survey the wreckage around the city, and state Highway Patrol and Emergency Management officials said they have been monitoring the situation. But Sunday, the city’s attention was elsewhere.

“Our focus is not on the dollar amount,” Interim City Manager Dave Corliss said. “Our focus is helping to ensure residents are safe.”

Near downtown Sunday morning, the reality of the storm sank in for residents and business owners. From all indications, the storm’s winds hit hardest here, where whole trees lay strewn across streets and debris from torn buildings blocked sidewalks.

The wind’s pressure shattered the wide, darkened windows of the Replay Lounge, 946 Mass. Owner Nick Carrol paced the glass-laden sidewalk outside, talking on the phone to his insurance agent.

“We lost all the metal that holds the glass in,” he said. “There’s nothing there.”

Inside, a half-dozen of the bar’s employees gathered memorabilia and equipment that had scattered through the building. A few smoked cigarettes in the now-outdoor area.

Wind velocity downtown was so strong that the concrete planters in the 700 block of Massachusetts were stripped bare of their mulch. A tree just south of Palace Cards and Gifts, Eighth and Massachusetts streets, was snapped off two feet above the ground. 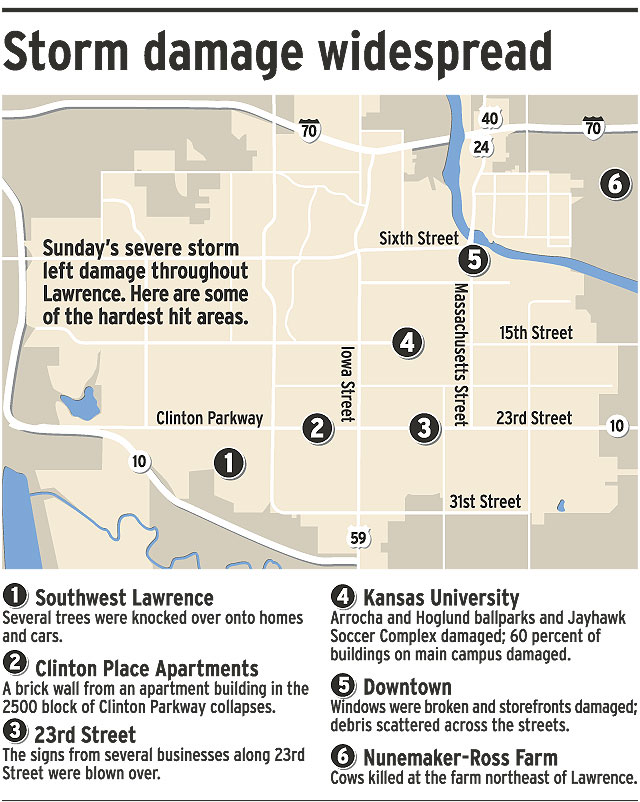 View an interactive map of the damage left behind by the storm here.

In the 900 block of Rhode Island Street, Walthall and fire crews checked on two houses that a tree had smashed.

David Conkin was asleep in one of the houses when the tree landed on the roof. In pajama pants and bedroom slippers, he tried to describe his first thoughts when the winds went crazy.

“Oh my God, we’re going to die,” he said, smoking a cigarette.

Chad Harper didn’t believe his wife at first when she called him at work Sunday morning and told him a tree had fallen through the roof of their East Lawrence house.

“I thought maybe it was two or three branches that struck the roof,” he said Sunday morning.

Raven Harper had planned on sleeping in but the sound of the approaching storm woke her up. She got up and went into the bathroom just as the wind picked up and the tree came crashing through the ceiling into her living room at 1339 N.Y.

“If I had been in bed I would have been covered by debris,” she said.

Next door, Mary Jones had been in bed reading when the storm approached. She got up and looked out the window.

Relief efforts got under way quickly in Lawrence on Sunday:
¢ The Red Cross opened a shelter at the First Baptist Church at 14th Street and Kasold Drive at 1 p.m. Sunday.
The shelter was opened to residents who had no power at their homes, and will also supply food and fresh water.
For more information, call the Douglas County Emergency Operations Center at 838-2459.
¢ The Roger Hill Volunteer Center in Lawrence is matching volunteers with agencies in need of help during the storm cleanup.
To volunteer, call the center at 865-5030 or e-mail info@rhvc.org. Margaret Perkins-McGuinness of the center said the agency will return the call or e-mail when they need the help.

“There was about 30 seconds of wind” Jones said. “I watched this tree go vertical.”

Jones was starting for the basement when she heard the tree fall.

“It sounded like a champagne cork popping,” she said. “This was just a really freaky storm.”

Tree limbs as well as entire trees littered yards and streets. Some streets were blocked.

Many residents in East Lawrence considered themselves lucky, including Sara McManus. The roof over her head was blown off as she slept on the second floor of an apartment house at 946 R.I. The ceiling, however, remained intact.

“The noise woke me up,” McManus said. She went downstairs and stepped outside.

“One of the neighbors came over to check on us. That’s when I found out the roof had blown off. I’m just thankful to be OK.”

In the 900 block of New Jersey Street, Louis Mendoza had been up listening to a police scanner when he heard something about a possible tornado sighting. He looked out the window and saw a wall of dust and debris coming toward him from just behind New York School.

“We didn’t have no chance to get to the basement,” Mendoza said. His house sustained damage to the roof and sides and some windows were blown out. A van parked in the driveway had its windows shattered.

The tree debris blocked the street, and neighbors gathered to try to clear it away. Someone drove up with a small front end loader and helped clear the street, Mendoza said.

“There were quite a few of us out working,” Mendoza said.

Neighbors helped neighbors elsewhere as well. The Harpers had plenty of help removing items from their house and Jones allowed them to store them at her place.

Winds also wreaked havoc with vehicles on the Kansas Turnpike. Near the East Lawrence exit, a truck driver from Abilene suffered minor injuries while driving west about 8:14 a.m. A strong gust of wind blew the semitrailer onto its left side. The driver, Alphonse J. Pawlowski, 49, refused treatment at the scene, according to an accident report.

Although the eastern side of Lawrence was hit hardest, the southwest part of the city also sustained damage.

“We’re just trying to keep people away,” said Barb King, director of outpatient services, “because if the winds pick up again, it’ll blow. Plus, there are nails all over the place.”

King said office workers would call patients early today if their appointments had to be canceled.

“We’ll see,” she said. “If the electricity comes on, we’ll be OK. We’ve got the generators running now.”

“I was looking east, out my second floor window,” he said. “The lines were swinging back and forth and then, all of a sudden, there was this big blue ball of flame.”

The flame is suspected of starting a grass fire south of Clinton Parkway.

Sixty percent of campus buildings were damaged, the university said in a news release, prompting officials to cancel classes today.

The damage included plenty of windows and broken glass, but it didn’t end there. Winds demolished the door to Snow Hall. Roofing tiles were strewn about campus, leaving clean-up crews trying to determine which buildings they came from.

Several buildings were hit hard by the storm, including Murphy and Malott halls. But Long said that Templin Hall sustained the most damage, including windows, roof tiles and equipment that had been caught in the storm.

“It’s one we’ll give particular attention to,” he said.

Plus, many trees on campus had been splintered or uprooted. Officials wanted the streets and sidewalks clear of traffic today so crews could clear away the loose branches and debris.

Anschutz Library and the chancellor’s residence also were damaged, and the roof of the nondenominational Danforth Chapel, which has been the scene of thousands of weddings on campus, was nearly completely torn off.

KU radio station KJHK was knocked off the air Sunday when flying debris hit the station’s tower and damaged the transmission lines. Andrew Dierks, the station’s general manager and program adviser, said an attempt would be made Sunday night to broadcast at reduced power. If that failed, Dierks said he did not know when the station could be back on the air; it might be several days.

KU spokeswomen Lynn Bretz said that classes would resume on Tuesday, although some of the work would take time to complete.

“We had some large pine trees uprooted between the Arch (at the west end of Haskell Stadium) and the cultural center,” said Haskell President Karen Swisher. “Other than that, we fared pretty well.”

After the storms hit, Mayor Boog Highberger and Lawrence City Commissioner Mike Amyx were in the operations center, trying to coordinate the cleanup and damage assessments.

The cleanup process will begin this morning, when city crews will pick up wood and other debris from curbs throughout the day.

The city can’t assist with getting trees and branches from yards to curbs, but instead asked that people who need help moving heavy trash ask neighbors or friends for assistance.

Still, Highberger said that there will be plenty of work to be done to get the city back to normal. He said he was confident that the city and county were prepared to do it.

“I’ve worked with the people here,” Highberger said. “They are well-trained. They know their jobs.”

And for the most part, residents and business owners seemed upbeat. Besides a few people with minor injuries who walked into local hospitals, no one was hurt.

“It was a pretty potent storm,” resident Daryl Richardson said, “but I think we’ll be OK.”