Dallas ? When Dirk Nowitzki’s shot failed him during the playoffs, there was only one person he could turn to for help.

The man who built it.

As Frankenstein-ish as that might sound, there’s that sort of connection between basketball guru Holger Geschwindner and the monster of a player he created.

“I’ve said it all along, if I would not have met him when I was 16, 17, I wouldn’t be here at this stage,” Nowitzki said Friday from the platform of the NBA finals. “He taught me everything, he taught me all of the moves but also how to handle myself on and off the court. He’s been like a second father to me. I learned pretty much everything from him.”

They met by chance: Nowitzki was playing in his hometown of Wurzburg, Germany, in a game that overlapped the court time for Geschwindner, the captain of West Germany’s 1972 Olympic team, and his friends.

Geschwindner saw a tall, skinny teen with sloppy skills but an innate knowledge of the game. Although he’d never been a coach, Geschwindner was so intrigued by Nowitzki’s talent that he volunteered to work with him.

Soon, he realized he was dealing with a prodigy.

“After three, four practices, I said, ‘Dirk, we have to talk to your parents,”‘ Geschwindner recalled. 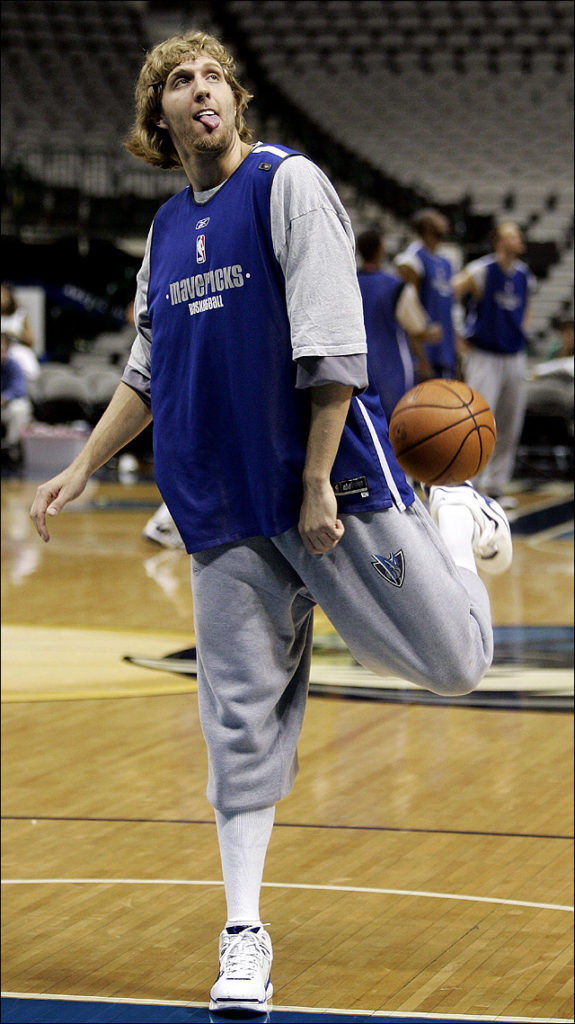 Nowitzki already was dreaming of reaching the NBA; Geschwindner believed he could make it happen. It would take dedication and hard work, but they already had the most important ingredient – raw ability.

“We made a five-year plan,” Geschwindner said. “After three years, we made so much progress already that the NBA teams called.”

The Dallas Mavericks drafted Nowitzki right around his 20th birthday. An awful team at the time, they could afford to endure his growing pains. And they were happy to let Geschwindner provide any help he could.

In an era where players in team sports travel with their own workout gurus, psychologists, masseuses and even manicurists, it’s pretty refreshing to see someone voluntarily get told what to do by a 60-year-old man who isn’t paid by his employer.

Then again, everything about their story is out of the ordinary.

Realizing how far behind his American peers Nowitzki was, Geschwindner decided his protege needed something unique to make him stand out against his competition. So instead of teaching his budding 7-footer a sky hook or other moves associated with big men, he dragged him out to the three-point line and kept him there.

“We knew one thing: A 7-footer who can play a little defense and is skinny has no chance in the NBA,” Geschwindner said. “So we had to demonstrate that he could do something they never had seen before – a 7-footer who could shoot three-pointers.”

Geschwindner’s conventional-wisdom-be-damned approach stretched to his training regimen, too. It was a stew of ideas based on the basics he’d learned in the 1950s and ’60s – exercises like walking handstands and pushing him around wheelbarrow-style: by his ankles, with his hands on the ground – and ideas he’d cultivated over 30 years in the business world.

There were reading assignments, such as “Typhoon” by Joseph Conrad, to stretch Nowitzki’s mind. Rollerblading for balance. He brought in fencers for tips on footwork, a world-champion rower to improve strength and coordination.

Their first Christmas together, Geschwindner gave Nowitzki a saxophone. (He switched to guitar after losing some teeth early in his NBA career.) Geschwindner later took Nowitzki to see the opera “The Marriage of Figaro,” adding that Nowitzki left the theater singing the songs.

“I know from my experience and my job that 30 percent of intelligence, how you move, can come from music,” Geschwindner said. “It’s just to learn the tunes, different mentalities. It gets him thinking in a way most ballplayers don’t.”

The first sign of success was making the junior national team. That took only four weeks.

As Nowitzki progressed, Geschwindner tweaked the plan he often calls his “blueprint.” For instance, to prepare Nowitzki for the rigors of an 82-game season, he played in three leagues, each with 50-game seasons, all at the same time.

The goal was building stamina. That’s the kind of thing Geschwindner talks about when he refers to “filling the toolbox” with skills.

Perhaps the most surprising part of all this: Geschwindner never charged Nowitzki a Deutschmark, even though he often had an hourlong drive each way.

“Of course not,” he said. “I learned basketball from an American soldier, and he was driving 15 miles back and forth to a boarding house to get me to practice. You have to give something back.”

Geschwindner doesn’t train anyone else, though he offers advice to anyone who shows up at their open sessions. “From time to time, some parents bring their kids over,” he said. “But usually after one practice, you have to tell them that the kid is pretty much 100 percent talent-free. I save the kid’s time. Don’t run around with illusions.”

The German government thought the Nowitzki-Geschwindner relationship sounded too good to be true, especially after Nowitzki signed a contract worth nearly $100 million, and they weren’t getting any taxes on whatever Geschwindner might have received.

So last July, he was arrested on tax evasion charges. Police even searched Nowitzki’s parents’ house. Geschwindner was released five weeks later, with help from a lawyer Mavericks owner Mark Cuban had used when he bought the team. The attorney had since moved to Germany.

“Dirk was perfect,” Geschwindner said. “He never had one second of doubt. He did all the moves that were necessary to help me get the problem out of the way.”

Geschwinder has always been there for Nowitzki, too.

He visits a few times each season and they spend blocks of time together every summer improving whatever is his biggest weakness.

That’s how Nowitzki has become a strong rebounder, a credible defender and an improved low-post player – and a perennial All-Star, solid MVP candidate and superstar of this postseason. He’s turned so many heads that even Shaquille O’Neal says he wants his kids to watch Nowitzki play because he’s the start of a new breed of big men.

“We both think that I haven’t made it yet,” Nowitzki said. “I feel I have a lot to learn.”

Geschwindner has been here most of this postseason. He watches team practices in the afternoons, then works with Nowitzki at night. This week, he’s been carrying around a piece of paper with diagrams of plays that coach Avery Johnson expects to run for Nowitzki.

“I’m always hearing him telling Dirk, ‘Repetition, repetition. Do it the same way,”‘ said guard Jason Terry, a frequent late-night workout partner. “And if you watch Dirk, his release is flawless.”

Terry also volunteers that the trim Geschwindner can still handle the ball himself.

“Shoot, if we put a uniform on him, I bet he could go out there and get 20 points,” Terry said.

All things considered, Geschwindner should be bursting with pride. If he was American, he’d be lining up book and movie deals, perhaps securing a spot on Oprah’s sofa to talk about his guru-ness.

Instead, he takes little credit.

“It’s Dirk’s talent,” he insists repeatedly. “He’s ready to learn and he’s listening. I guess we can develop something together. So far, it worked.”

There’s more to be done, though, and the mad scientist in him seems to come out when he excitedly mentions their upcoming practice time.

“We have to make another development step in the summer,” he said, a hint of impatience in his tone.

Then he catches himself and laughs.

“But this year,” Geschwindner said with a smile, “the summer will be pretty short – which is nice.”