Your guide to getting around the festival grounds 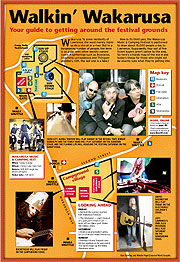 Wakarusa. To some residents of Lawrence, the word merely represents a street or a river. But to a burgeoning number of people, the term is on a par with other wackily named concert gatherings such as Bonnaroo, Coachella, Lollapalooza and Thingamabobbery. (OK, the last one is a fake.)

Now in its third year, the Wakarusa Music & Camping Festival is positioned to draw about 15,000 people a day to Lawrence. Supposedly, four out of five ticket buyers aren’t native to the area. So here’s a handy map of the event and today’s lineup for those who might not be exactly sure what they’re getting into.