It began a few years ago as a fun holiday outing for a few runners before they had a Christmas party.

But this year’s Jingle Bell Run on Dec. 14 will be raising money for a substantial cause: the Ballard Community Center.

“Laura Dahnert came up with this idea four years ago and I thought she was crazy,” said Don “Red Dog” Gardner, who runs the Red Dog’s Dog Days year-round community fitness program.

Dahnert suggested Red Dog participants get together in Lawrence’s downtown, deck themselves out in colored lights and bells, and run along Massachusetts Street.

“It started out just as a joke, for people to meet and run downtown wearing battery lights,” Gardner said. “We had a few people that time. Then we went out and celebrated Christmas and had a drink.”

A year later, the group decided to host the run again as a fundraising event to help a fellow Red Dog participant, Ellen Young, with her family’s medical bills.

Last year, the group took up another collection during the Jingle Bell Run, raising several hundred dollars for the Lawrence Humane Society.

This year’s event will provide funds for the preschool classrooms at the Ballard Community Center.

Dianne Ensminger, the Ballard Community Center’s president and chief executive officer, will be at the run to accept donations.

“It helps support the low-income children of Douglas County,” Ensminger said. “We have a goal of $100,000 for our GIFT (Giving It For Tomorrow) program for the month of December. This will go in a pot towards that goal.” 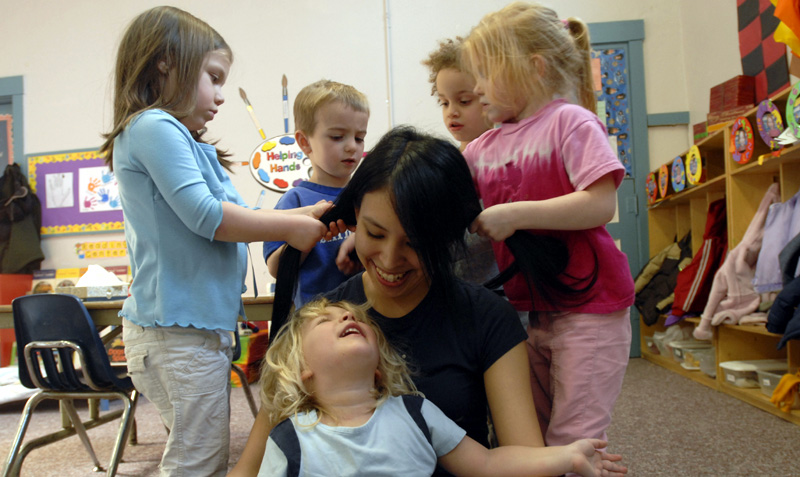 Those who want to make a donation early can do so by sending a check to Jingle Bell Run, Ballard Community Center, P.O. Box 7, Lawrence 66044.

They’ll run from the parking lot to Ninth and Massachusetts streets, go south to the Douglas County Courthouse at 11th Street, go back north to the railroad tracks near Sixth Street, then return to Kizer-Cummings for some hot cider.

Gardner said he wasn’t certain what the turnout would be.

After the run, the group will go for its annual celebration to the New Hampshire Street Bistro, 811 N.H. The restaurant will donate a portion of the amount the group spends to the Ballard Center, Gardner said.