River pollution report may be key to improvements

The Kansas River is polluted, and a major culprit is runoff from vast farmlands and city streets. Nothing new there.

But a just-released study gives perhaps the most comprehensive look yet into the problem, and it can be used to try to find solutions, officials said Thursday.

“It’s all about getting a better understanding of how the stream works,” said Teresa Rasmussen, a hydrologist for the U.S. Geological Survey in Lawrence.

Rasmussen was one of three authors of the approximately $1 million study that continuously monitored water in the Kansas River since July 1999.

The 126-page report gives a detailed account of sediment, nutrients, bacteria and other water characteristics flowing through the river and measured hourly at gauges at Wamego, Topeka and De Soto.

The study concluded that water quality in the Kansas River, a source of drinking water for hundreds of thousands of people in northeast Kansas, including Lawrence, is primarily affected by nonpoint source pollution during storm runoff. 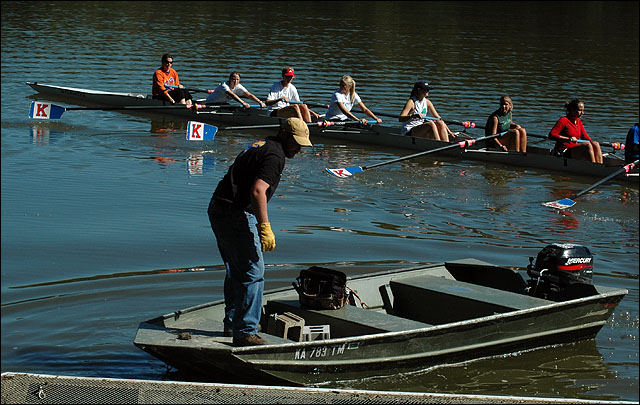 The Kansas University women's crew team launches into the Kansas River on Thursday for a practice session near Burcham Park. The U.S. Geological Survey recently issued a report on pollution in the Kansas River.

Nonpoint sources of pollution are things on the ground, such as pesticides, fertilizers and animal waste, that get washed into rivers and streams during rains and snow melts.

“If there are going to be water quality issues, there’s a pretty good chance that is going to happen during storm events,” Rasmussen said.

On average, 64 percent of the total amount of sediment, 40 percent of nutrients and 83 percent of the Escherichia coli (E. coli) bacteria transported in the Kansas River at De Soto during 2000-03 occurred during storm runoff, the study showed.

E. coli bacteria indicates the sanitary health of a river for recreation, while excess sediment and nutrients may adversely affect aquatic life.

If there were any surprises in the study, it was how quickly water quality could worsen during periods of heavy rains, she said. The level of turbidity, measuring sediment and also showing evidence of bacteria, could increase 100fold within an hour, she said.

Tom Stiles, chief of the water planning section at the Kansas Department of Health and Environment, which co-funded the study, said the report “points out the tremendous variability in water quality we see in the Kansas River along its length, season-by-season and year-by-year.” 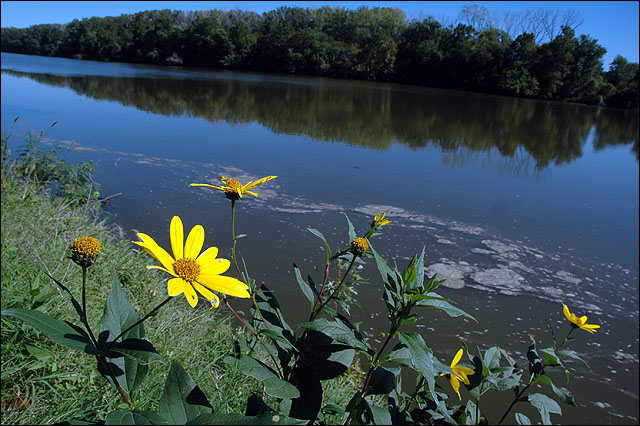 Wildflowers line the banks of the Kansas River on Thursday as some visible scum floats by near Burcham Park.

“The big challenge that has been there and confronts us is the nonpoint side and trying to focus resources to mitigate the water runoff impacts. That will be a long-term battle,” he said.

When asked if farm and ranching interests should fear the possibility of attempts to regulate runoff, Stiles said no.

“There is a whole arsenal of techniques and practices that can be applied to corralling runoff from agricultural working lands,” he said, such as establishing wetlands to absorb nutrients. “It’s just a function of getting farmers to participate and making resources available to help those farmers.”

A spokesman for the Kansas Livestock Assn. said the group had not had time to analyze the report yet.

A limited number of copies are available from the USGS office in Lawrence.