I am still a woman

even if my heart hurts –

with emptiness, my soul shakes

because this body was cut,

one part off another.

These are the words of a woman coming to terms with new realities. A woman bent but not broken by breast cancer.

A woman whose breasts were removed to spare her life. A woman who can’t stop celebrating that life every day.

These are the words of Lawrence poet Caryn Mirriam-Goldberg. This time last year, she combined them with music by singer-songwriter Kelley Hunt and movement by the Prairie Wind Dancers (now 940 Dance Company) in a performance at the Lawrence Arts Center about the journey through a disease that afflicts one in eight women.

Friday’s “Dangerous Curves II: Surviving and Thriving” is the resurrection of that performance, with lots of new twists.

“We had many people who came to each of us after last year’s performance and told us what it meant to them and asked us to take it on the road or do it again,” Mirriam-Goldberg says. “That feels incredibly rewarding to be of service to your community, to use your art or music or writing to be able to reach people.” 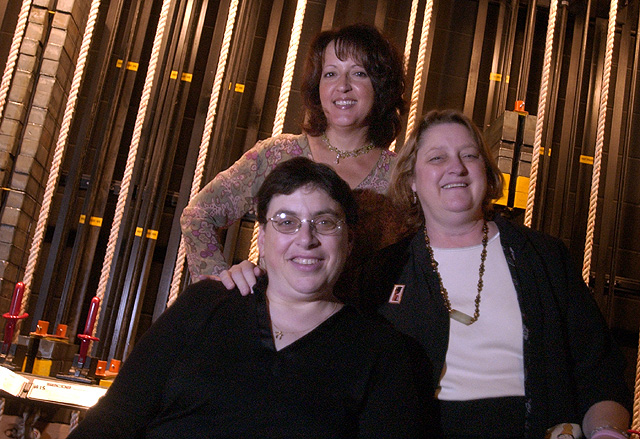 Whereas Mirriam-Goldberg and Hunt collaborated to write one song last year, they’ve co-written a half-dozen numbers since then, one of which Hunt premiered in early September on radio’s “A Prairie Home Companion.”

Also on the program are new poems by Mirriam-Goldberg, new songs by Hunt and a new dance choreographed by arts center dance director Candi Baker, performed by arts center ballet director Deborah Bettinger and set to a Hunt song called “Sister to a Butterfly.”

“It’s a wonderful piece about somebody telling someone who’s hurting for whatever reason – physical or mental – that the whole world’s available to them because they’re a sister to a butterfly,” Baker says. “It’s a beautiful piece about how to spread your wings and fly, embrace the world.”

Three and a half years removed from her diagnosis, Mirriam-Goldberg feels strong enough to embrace the world rather boldly, finding empowerment in words.

But that’s not to say the disease isn’t part of her daily life.

“In the last three months, my mother had breast cancer again and had to have a double mastectomy, and my sister had a double mastectomy and other surgeries two weeks ago,” Mirriam-Goldberg says. “It’s kind of come back and grabbed me from other angles.”

In a new poem, Mirriam-Goldberg chronicles how the illness terrifies, wears down, unifies and, somehow, revitalizes “The Women in This Family”:

‘So many ways to thrive’

Mirriam-Goldberg, Hunt and Baker were committed to bringing back “Dangerous Curves” for many reasons, not the least of which is calling continued attention to the importance of early detection with breast cancer.

There are emotional benefits, too.

The trio aren’t the only ones using creativity cope with and explore the facets of breast cancer. In addition to Friday’s performance, artists who have survived cancer or know someone who has struggled with the disease have contributed works to an exhibition on display in the arts center lobby and at Lawrence Memorial Hospital through Oct. 31. An opening reception will precede Friday’s performance at the arts center.

A series of community workshops focusing on “Healing Through the Arts” also is being offered throughout the month.

“The arts have the potential to help us heal in a variety of ways,” says Baker, a breast cancer survivor. “That’s where the thriving part comes in. Whether we survive for six weeks or 10 years or whatever – and not just breast cancer, but anything serious that affects us – if we can thrive while we’re surviving … that’s what makes it wonderful.

“And there are so many ways to thrive, even in the midst of the challenges of a serious cancer.”

Helping out and taking care

Lawrence Breast Cancer Action will receive a percentage of proceeds from the performances, workshops and art sales. For more information call 766-8887.

In honor of Breast Cancer Awareness Month, Brighton and The Etc. Shop have teamed up to raise money for the Breast Center at Lawrence Memorial Hospital. Brighton has created an exclusive bracelet to help raise awareness and money for the cause. Linda Lester, owner of the Etc. Shop, and Jerry Kohl, CEO of Brighton, will donate 100 percent of the retail value of the bracelets to the center.

On Oct. 15, Jodi Carlson, of LMH, will show an informational video, pass out educational material and answer questions from 11 a.m. to 3 p.m. at the Etc. Shop, 928 Mass. The Breast Center will have extended hours through October to accommodate as many women as possible for mammograms and screenings.