Myths are lunacy, some scientists say

Debbie Nall swears she doesn’t need a calendar to determine the lunar phase.

She says she knows that when students are cranky at Central Junior High School, where she is a lunchroom cashier, there’s likely a full moon.

And she says she saw exactly the same behavior among residents at Brandon Woods Retirement Community, where she served 16 years as activity director. Residents were just more agitated during a full moon.

“There is some truth to it, because I’ve seen it,” Nall says. “You can just tell their behavior changes, and usually to me it’s more for the bad behavior. (Students are) more hyper and climb the walls.”

The theory that things get a little crazy during a full moon – like the one tonight – has been around for centuries. It’s perpetuated by werewolf tales, folk stories and urban legends.

But scientists say despite all the commonly held beliefs about full moons affecting behavior, the notion is nothing more than moonshine.

“There’s no statistical truth to it,” says Bruce Twarog, professor of astronomy and physics at Kansas University.

Twarog says he’s yet to see a scientific study that proves any connection between the moon’s cycles and human behavior.

Most who believe there is a connection between the two argue that because the moon controls tides, and, because more than half of the human body is made of water, it would be a logical assumption that the moon could affect the body as well. 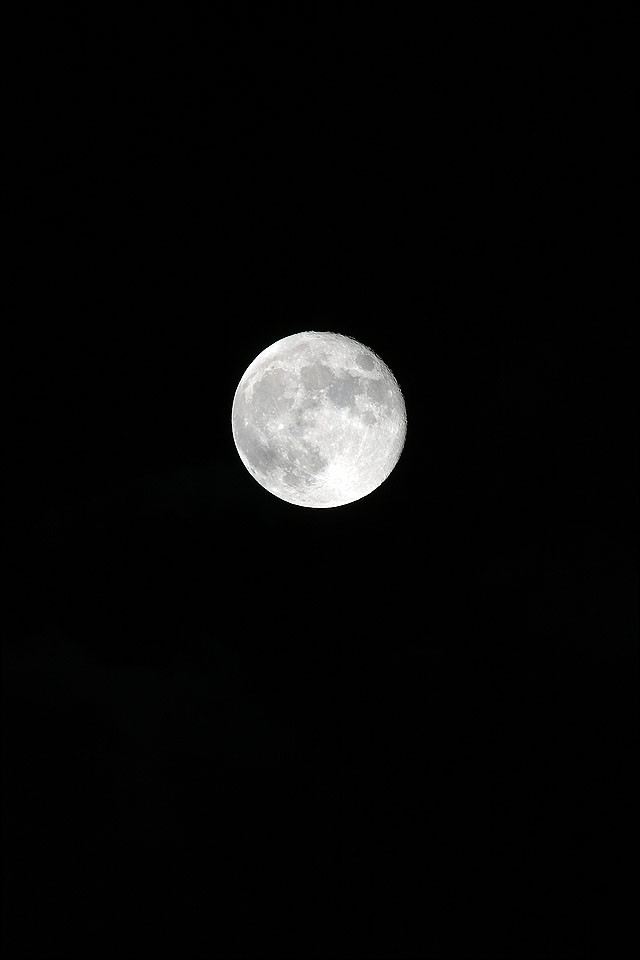 But Twarog says it’s simply a matter of scale. Unlike the earth, the human body is too small to be affected by the moon’s gravitational pull. One study in 1996 debunking the moon myth said a mother holding her child exerted 12 million times as much force as the moon does.

Those who believe the moon myth have tried to tie the lunar cycles to a variety of effects, including increased childbirths, more crime, the stock market, fertility, natural disasters, suicides and car accidents.

Data collected in several areas in Lawrence from the past year show no trends on full moon days.

At Lawrence Memorial Hospital, there were an average of 2.75 babies delivered on full moon dates since November 2004. That compares with an average of 3.09 births among all days.

There were, however, a few more emergency-room visits on full moon days – 82.3 per day on average, compared with a 77.7 average on all days.

“We always joke about it, that the ER gets busy when the moon’s full,” Hunt says. “The reality is, I have not seen any correlation. I don’t see anything objective to it.”

He says the days emergency department staff can plan on being especially busy aren’t during full moons. They’re busier on basketball and football game days, or during weather events such as ice storms.

“I don’t alter my psyche or medicine based on the phases of the moon,” Hunt says.

Likewise, Douglas County emergency personnel didn’t see increased activity during full moon days during the past year – in fact, they saw less activity. There were an average of 21 fewer 911 calls on full moon days, when those days were compared with the average for the same days of the week.

There are several specific types of calls that seemed to increase on days with full moons. Those include fire alarms, car stops and “special calls.”

But Jim Denney, director for emergency communications for Douglas County, says he thinks other factors – such as storms – on those days were responsible for the increased calls. 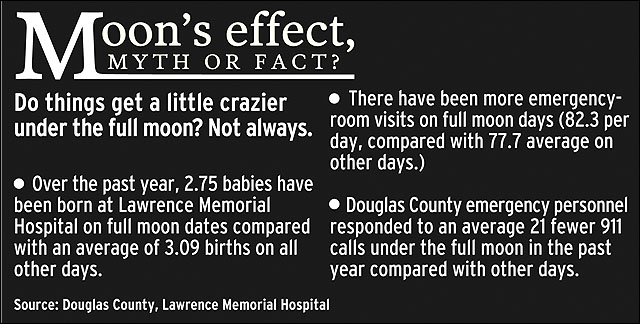 But some people are still convinced of the connection.

Kathleen Firns-Hubert, of Lawrence, says the phenomenon landed her some extra cash while she was a waitress at a cocktail lounge in St. Louis. The clientele had a different attitude on full moon nights, she says.

“Not only was the place jumping, but the people had a different sense about them – like they were really letting go,” she says. “Sometimes it took me a while to recognize a pattern, and often I would remark to a co-worker, ‘Wow! I wonder what’s going on. It’s crazy here tonight.’

“Invariably, either someone would comment about the fact that it was a full moon, or I would find out later that it had, indeed, been the case.”

William Medlock, also of Lawrence, takes the full moon phenomenon to another level. He’s a practicing Wiccan, and says many of his beliefs have a connection with the cycle of the moon.

“Most of the time, when there’s a full moon, I’ll do a small recognition of it,” he says.

That often involves lighting a candle and saying a few words to the god and goddess he worships – the god focuses on seasonal changes, the goddess focuses on nature and changes such as the lunar cycle.

“It’s more sacred,” he says. “I spend more time outside when there’s a full moon, and I’m looking up more. I have more of a feeling inside of joy.”

For Medlock, the cycles of the moon represent the various cycles of life. And he’s pretty sure the full moon affects others, too, with gravitational forces and so much of the body made of water.

“Of course we’re going to be affected,” he says.

But Twarog, the KU professor, says people who see the full moon effect tend to be the ones looking for it.

For instance, during the Aug. 19 full moon, Lawrence Memorial Hospital saw eight births – more than twice the normal number. Someone could take a quick glance at limited data such as that and attribute it to the full moon, he says.

“You tend to look for the effect, and if something happens, it’s, ‘Ah, it’s a full moon,'” Twarog says. “The times nothing happens, you don’t remember those.”