It’s a miracle the second Wakarusa Music and Camping Festival happened at all.

“We lost our tail financially last year,” says festival co-organizer Brett Mosiman. “The only reason we did it again was the feedback that we got immediately after the festival. I’ve been doing this for 20 years, and there was something special going on. People were buying into the park, the lineup, the concept.”

And this year folks literally bought into it.

Only 7,500 paid attendance was collected for the 2004 concert event, compared with an estimated 50,000 this year. In fact, Saturday’s musical lineup was so enticing that patrons were being turned away at the door. (Wakarusa had a contract with Clinton Lake State Park to cap attendance at 15,000 people per day.)

“We had a really good Waka with perfect weather. It was on the high end of our expectations,” Mosiman says.

Mosiman credits a major portion of the fiscal success to a better phalanx of security that patrolled the park entrance, checkpoints and backstage areas.

“We greatly reduced all the counterfeit and contraband scalpers,” he says.

With prices that topped $119 for full-festival passes and $60-per-day gate passes, the savings were enormous. 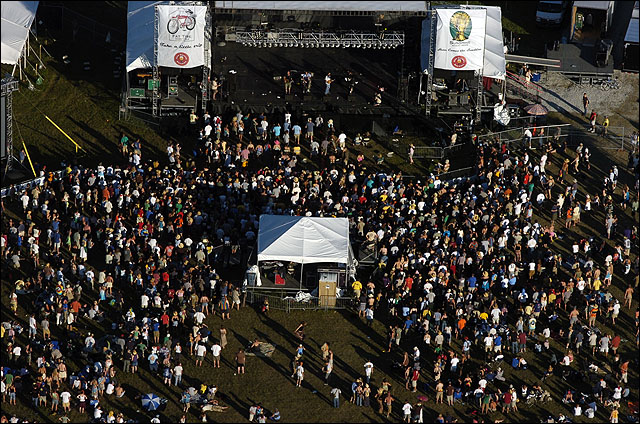 “I’ll tell you how bad it is,” Mosiman says of potential counterfeiters. “On Thursday morning, copy shops in town were calling us. They had (customers) with our staff laminents saying Brett had asked for 100 of these. The carnivores come out. But thank God we do business with those places and they were suspicious enough to call.”

Although scam artists were well-curbed, one group of trespassers got away scot-free.

“We had a zero tolerance for dogs but there were a heck of a lot of them out there,” he says. “I don’t know if (owners) put them in their trunks or what.”

“With that many people out there, they have to be people who WANT to do right in order to have the festival come out the way it did,” says Wakarusa spokesperson Heather Lofflin. “I think it was the right crowd for the right festival.”

Tickets sold to patrons in all 50 states. As with last year, attendance was dominated by non-locals. According to online figures, only 20 percent of sales came from those based in Lawrence, Kansas City and Topeka.

Lofflin recalls, “I met a woman who had just come from Bonnaroo (in Tennessee), and her comment to me was, ‘I enjoyed this festival so much more. At Bonnaroo there was just too many people. It was way too uncomfortable.'”

Organizers say much of the credit for recruiting so many out-of-towners goes to an aggressive advance campaign.

“We had no aspirations to have a national festival when we dreamt this up two years ago, but the Internet made it national,” Mosiman says.

He cites a well-coordinated street team effort that was responsible for printing and distributing almost half a million fliers and posters. The marketing was so widespread that a friend of Mosiman’s mother-in-law mentioned she saw Wakarusa fliers in her hotel last week when she was vacationing in Shreveport, La.

It’s all speculation as to why locals weren’t as compelled to attend. But one theory is that the majority of headliners perform in town so often – and for much cheaper – that concertgoers have already indulged in numerous opportunities to see them. It might be a big deal for someone from Florida to see Jay Farrar and Son Volt. But for Lawrencians, it’s a band that just appeared at The Bottleneck in November for $13.50.

A work in progress

Mosiman envisions a few changes for next year’s event.

“We tried to do a lot toward the family and kids to get local people interested. I’d say that largely failed,” he admits. “I doubt if we do the carnival again. It was unfortunate that because of the weather we couldn’t set them up where we had plotted them. So they were out of the traffic pattern, basically.”

Mosiman also says security in the campground area will likely increase to deal with the rogue vending and other concerns. He also expects new group artistic activities such as yoga and the Sunday morning drum circle to expand on a much larger scale.

He reveals there are discussions that the state may let Waka fest control the whole park for next year’s weekend.

As for musical modifications, don’t expect a radical revamping.

“I think the festival is getting a pretty firm stamp of the type of acts we’ll do. Both Bonnaroo and Coachella (in California) were going to the alternative and poppy stuff, and I think it’s not working. Bonnaroo’s numbers were down 25,000 people.

“We have a pretty good group of bluegrass, alt-country and jam stuff. We’ll be able to stretch the boundaries here and there. … I just don’t see a Weezer fitting in real well. You can’t be all things to all people.”