San Francisco ? After years of touting its Macintosh computers as superior alternatives, Apple Computer Inc. said Monday that it would switch to the very Intel microprocessors that power machines designed to run Microsoft Windows.

Though the transition will help the Mac compete against Windows PCs in performance and – potentially – price, the move poses big challenges for Apple, its software developers and users. Past Mac chip changes have led to significant market share losses.

Apple now must persuade current users and potential buyers that today’s Macs will not become the technology equivalent of lame ducks. And it must get software companies to develop programs that work on both the Macs of today and of tomorrow.

Apple CEO Steve Jobs admitted the change would not be fast or easy. The first Intel-based Macs won’t appear until June 2006, and the full product line won’t shift to Intel until the following year.

Dave Greenbaum, a board member for the Lawrence Apple User’s Group 2.0, said the combination would be good for companies and consumers alike: The computers should become easier for technicians to repair, and consumers should find more Macs on store shelves, at lower prices. 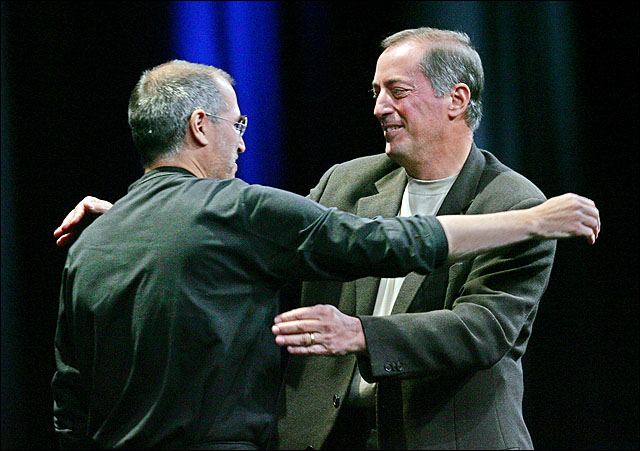 The only question is whether Macs will lose their cache, said Greenbaum, who works as a computer technician for hundreds of clients in Lawrence, Topeka and the Kansas City area.

“I remember a time when you’d drive down the street and you’d see a Hummer, and you’d be like, ‘Whoa, that’s a Hummer! Wow, that’s cool!'” said Greenbaum, who used his first Apple in 1980 and first Mac in 1984. “Now, you see ’em everywhere. Once GM bought Hummer, it kind of lost a little bit of its charm.