Booming sales cause fisherman to expand business into shopping center

Before Jerry Neverve loads up his rod, reel and gaiters for his next fly-fishing trip into the Rockies, Sierra Nevadas or even the Ozarks, the avid outdoorsman plans to drop by his neighborhood fly-fishing shop.

“It’s an expensive hobby,” said Neverve, who owns the Red Lyon Tavern in town. “Anytime we have a chance to spend a whole lot of money on something really stupid – like little 20-weight flies that we’re barely able to see – oooh, that’s cool.”

Tim Yager is hoping more people like Neverve bite on the lure of his latest endeavor: Yager’s Outfitters, a new retail fly-fishing shop in southwest Lawrence, at the edge of the city’s burgeoning residential growth and on the way to Clinton Lake.

The shop is the outgrowth of the Yager’s Flies operation born seven years ago in Yager’s basement. It’s a business he started with $500 and a few dozen flies to sate his lifelong jones for the artful form of fishing, ingrained since his childhood trips into the Adirondacks while growing up in upstate New York.

Today, Yager’s Outfitters stocks 150,000 flies alongside dozens of lines and items of gear, apparel, equipment and virtually everything else others would need to cast their lines into the world of fly fishing. Yager plans to offer fly-fishing classes, and customers can arrange guided trips through the shop to farm ponds in the Flint Hills.

This past year, the business generated nearly $500,000 in sales from its Internet and catalog business, Yager said, with the operation snagging 20 to 30 orders a day from customers in New York, California and all points between.

The shop’s toll-free phone number is one digit away from the ticket line for Southwest Airlines, leading to more than a few wrong numbers. 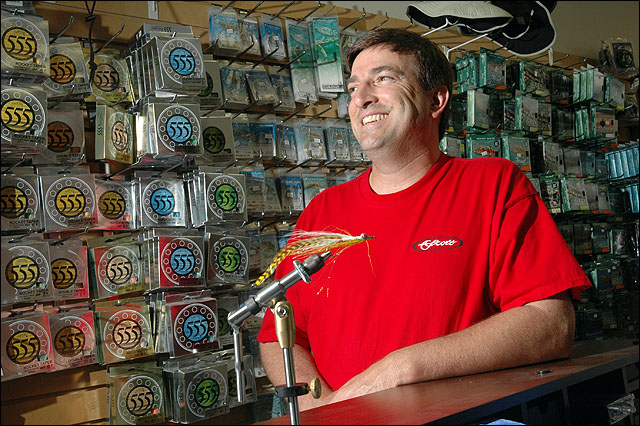 Tim Yager has opened Yager's Outfitters, a fly-fishing shop at the corner of Clinton Parkway and Wakarusa Drive in Lawrence. The shop offers flies, apparel, equipment and guided fishing tours.

The retail shop just opened at the southwest corner of Clinton Parkway and Wakarusa Drive, and already it has attracted notice – even though it lacks an outdoor sign and is open only Tuesday and Thursday evenings and most of the day Saturdays.

A handful of die-hard anglers find time to drop by and gawk at the wall of flies and array of specialty rods and reels.

“You can go in there and talk to other people who are as nuts about it as I am,” said Rick Laughlin, a Lawrence firefighter/paramedic who started buying flies and equipment through Yager’s Web site a few years ago. “Now I can drive across town and get everything I need. I’ve got instant gratification.”

Being in Lawrence, off Interstate 70, also gives Yager’s Flies access to fishermen trekking to Colorado, California or anywhere else trout, bass and other fish are biting on “Hogan’s Hoppers,” “Three Mile Isle Ants” and other carefully camouflaged hooks.

Kind of like another, larger retail fish just down the highway near Kansas Speedway.

“Cabela’s used to be a mail-order business, with a warehouse, and somebody said, ‘Why don’t you do retail?’ ” Yager said, recalling the origins of the $1.6 billion-a-year competitor whose store in Kansas City, Kan., ranks as the state’s top tourist attraction. “That’s what we’re doing. : A free-standing, stand-alone, large shop would be really great for Lawrence, Kansas.”