Max Keith Sutton feels more kinship with poets of a bygone era than he does with writers working today. Great wordsmiths like Gerard Manley Hopkins, William Wordsworth and Robert Browning — writers he taught students about as a professor at Kansas University for nearly 40 years — are some of his favorite reads.

But Sutton’s own poetry intentionally shares more in common with the work of his contemporaries.

“Part of me wants to rhyme, and part of me thinks it would just get so stale if I did that,” Sutton says. “People wrote rhyming poetry with great success for centuries, and you compare yourself against somebody who did that and you always think, ‘Why should they read this poem by me when they can go read Wordsworth or Herbert or Donne?'”

So the recently retired KU professor writes free verse, always trying to impose precision, tension and a sense of form on his words. It’s only been within the past decade that Sutton has become serious about writing poetry, though he remembers reciting made-up stanzas as a child. The occasion of his good friend and fellow KU professor John Bunce’s death motivated him to get back to the craft.

Bunce, who had been Sutton’s running partner in a KU jogging group, died of a brain tumor in the early ’90s. Not long after, Sutton and his wife were vacationing in Arkansas and stopped during a hike at Petit Jean State Park to rest along a river path.

“I was lying down on a rock, and it was a beautiful day, and it seemed like all you could hear were these various creek branches pouring in,” Sutton recalls. It occurred to him to contrast Bunce’s situation with an image of the voices of the water being like an unknown tongue. In the final two stanzas of the poem, Sutton writes:

“Up north, a man too young / to limp and stumble, his children / not yet grown, lies in bed / after biopsy, making what terms he can / with a brain tumor. All winter / it kept roaring in his ears / with no interpreter. Now he has one.

“Downstream my wife bathes her feet / by a sweetgum tree. / For you, John, heaven might start like this. / from bedrock, when one voice / that fills all hollows / like the voice of many waters / stops singing in an unknown tongue.” 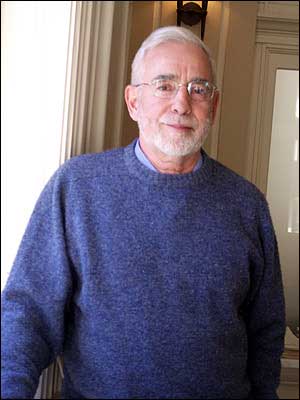 For Sutton, who grew up in northwest Arkansas, experiences have always been the inspiration for poems: his father playfully swinging down out of a hickory tree to surprise his children, encountering a cedar waxwing on the sidewalk while walking to class, or meeting a proud father of five leaving a Lawrence food pantry with “sackfuls of canned charity.”

Although Sutton fears his poems often don’t live up to his standards, he says a good piece of verse should give a sense of something happening.

“The poem needs to give that sense of present action because if it’s there, the reader will get a sense of discovery and growth from point to point,” Sutton says. “When I was teaching, there were some teachers at KU who were big on the meaning of a poem. I decided to opt for what HAPPENS in a poem.”

Sutton has English degrees from the University of Arkansas and Duke University, and a doctorate in Victorian literature from Duke. He taught English at KU from 1964 until 2003. He has published several scholarly books and articles, and his poems have appeared in journals such as “Christian Century” and “Christianity and Literature.”

While he doesn’t consider himself a Christian poet in a strict sense, he does hope his poems glorify God.

“I do believe you can glorify God by writing about minnows or cedar waxwings,” he says. “I would like poems to generate more admiration for the creation and, indirectly, at least get people to wonder about the creator, what’s behind all that.”

Sutton is honored to be receiving a writing award named for Harlem Renaissance poet Langston Hughes.

“I guess it’s good for poets to know that they’re always writing in a tradition that was there a long time before them and that one hopes keeps on going,” he says. “It’s like a stream. You put your little foot in the water, but the stream’s come from a long way, and it’s got a long way to go.”

Kevin Rabas is a poet after Langston Hughes’ heart.

Like his Harlem Renaissance predecessor, Rabas appreciates the same toe-tapping rhythms in the written word that drive a good jazz lick.

“I get most of my ideas from melodies and from solos and bass lines because then I’m able to think over the lines, sort of like a scat singer or a singer who’s used to improvising with words over lines,” says Rabas, a 30-year-old Kansas University English instructor who’s on leave while serving as poet in residence at Emporia State University.

Although Rabas, who grew up in Shawnee, has been writing poetry and telling stories as long as he can remember, it wasn’t until his undergraduate years at the University of Missouri-Kansas City that he began immersing himself in the music that has become such a daily inspiration. He spent so much time in the school’s Marr Sound Archives that the people who ran the joint asked him to start shelving records.

“That’s how I got my job. I just hung out there all the time,” recalls Rabas, who also plays the drums. “I think listening is very important — listening and reading — for developing your style and keeping current and finding out where you belong among the community of artists, whether it be poetry or music or whatever visual art that you’re into.” 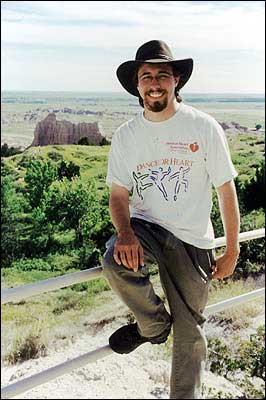 Rabas got plenty of practice listening while working as a reporter for the Junction City Daily Union in the late ’90s. He conducted hundreds of interviews while piecing together stories about local government, education and weather — all of which built on experiences spending time in newsrooms as a kid with his mother, who also was a journalist.

“I got to learn a little bit about what it is to be a writer, especially things like deadlines that a lot of beginning writers don’t get enough experience with,” Rabas says. “There’s the old joke, ‘Never trust a poet without a pocket watch.’ The idea of the deadline looming is something that I took with me.”

He also learned about brevity, which he’s found particularly useful in sculpting verse. After all, a poem is one of the most concise forms of communication. In “Bird’s Horn,” Rabas condenses an entire lecture on Charlie Parker at Kansas City’s American Jazz Museum into few more than a dozen lines:

Rabas is working on his doctorate in English at KU while he teaches composition and poetry there and at Johnson County Community College. He’s a manuscript and copy editor for New Letters, a Kansas City literary journal. He has English degrees from UMKC and Kansas State University, and a master of fine arts in creative writing from Goddard College. His poems have been published in a number of journals, including Mid-America Poetry Review, Coal City Review, Mind’s Eye, Rockhurst Review and Potpourri.

A good poem, he says, should move the reader. He strives for his poems to do the same.

“The best moments in a poem for me make me feel like there’s somebody behind me, and usually it’s the author, but it could be somebody from my past or somebody I don’t know,” he says. “It’s like a ghost or a phantasm is behind you that just gave you something.”