Natalie Bogan - Special to the Journal-World

As a student choreographer in an Orthodox Jewish school, Basya Schechter was forbidden from using music with English words. So she went searching for lively instrumental music.

“I went to all these music stores, and they directed me to Yanni,” Schechter says, laughing at the lack of understanding of the world music genre.

Although she had no plans to become a musician when she was growing up in New York, a multiyear stint traveling the world changed her mind. Schechter formed Pharaoh’s Daughter while in college. The 8-piece band has been trotting the globe since, performing a melange of world, Jewish and Middle Eastern music fused with electronic and folk pop.

Now, in her first trip to Lawrence, she hopes, “Kansas is going to feel like home.”

As the lead singer, Schechter has seen the group’s image morph with each of its first four releases.

“All of my records are in different genres,” Schechter says. “It’s a completely different animal.”

Since childhood, music has always been important in Schechter’s life. She recounts listening to her dad’s records.

“My father had a collection of Israeli music,” she says. “The music we had growing up had a lot of killing in it. I don’t think that has crept into my music.”

Studying in yeshiva — Jewish school — through high school and beyond, religion was always a central influence for Schechter. After briefly attending school in Israel, she returned to study at Barnard College in New York. 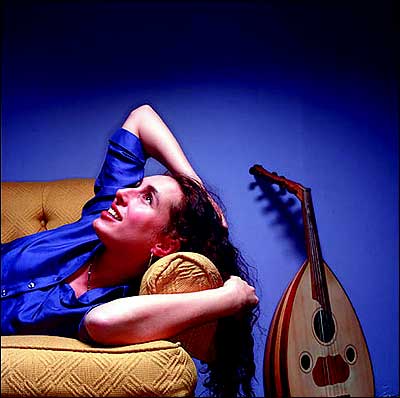 It was here she realized her musical talent. As an English major, writing came naturally, and as graduation approached, Schechter found herself writing songs and performing them in the school cafes.

The music of Pharaoh’s Daughter reflects the cultures Schechter experienced during her trips to Europe, the Middle East and Africa, as well as the Hasidic melodies of her childhood.

“I combined all the world musical influences that I absorbed from my travels,” Schechter explains, “and they all came out in my music.”

Pharoah’s Daughter is composed of eight musicians, seven of whom will make the excursion to Lawrence. In addition to Schechter on guitar, the band will feature Daphna Mor on recorder, Meg Okura on violin, Shanir Ezra Blumenkranz on bass, Noah Hoffeld on cello, and Daniel Freedman and Yuval Lion on drums.

The ensemble will perform material from its second album, “Out of the Reeds,” along with a few new tunes.

“We’re gonna do a lot of the Jewish, Middle Eastern, world beat fusions,” she says. “A lot of strings and a lot of exotic instruments — like a snake-charming zurna.”