Finally, there’s proof that Lawrence is the center of everything.

Start up “Google Earth,” a free satellite photo mapping program available on the Internet, and you see a distant view of the planet. Use the zoom feature to magnify the planet, though, and you end up with a bird’s-eye view of Lawrence.

“A lot of people think that Kansas is in the middle of nowhere,” said Mayor Boog Highberger, who first heard about Lawrence’s Google distinction a month ago in an e-mail from Georgia. “I prefer to think that we’re in the middle of everywhere. And Google apparently agrees.”

The director of engineering for Google Earth is Brian McClendon, whose online biography says he is a 1986 graduate of Kansas University.

“It’s intentional,” said Megan Quinn, a Google spokeswoman, when asked about Lawrence’s prominent location in the middle of the map. McClendon was unavailable for comment on Tuesday. 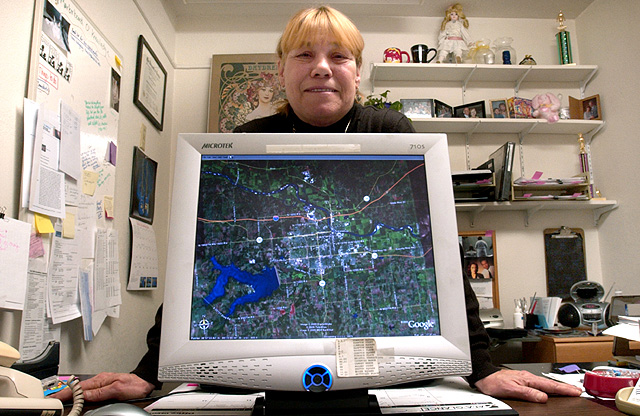 Roberta Floyd, resident manager of Meadowbrook Apartments, stands behind a computer displaying the city of Lawrence as portrayed by Google Earth satellite imagery on Tuesday in the apartment complex offices. When Google Earth is opened and zoomed in on without changing coordinates, the satellite view centers on Lawrence and, more specifically, the Meadowbrook Apartments.

The program debuted online last summer. Users can type in any address or latitude and longitude and the location zooms into focus, creating the sensation of flying over the landmark. A professional version of the program is used by news organizations, such as CNN, to spotlight news locations.

The New York Times on Tuesday reported the alarm Google Earth has caused in some foreign countries, including India, where officials have said the satellite imagery might reveal too much detail about military installations.

But officials at Meadowbrook Apartments in west Lawrence – the ultimate centerpoint on the opening Google Earth map – were thrilled.

The complex, at the intersection of Bob Billings Parkway and Crestline Drive, has about 1,000 tenants. Many are KU students, but apartment managers on Tuesday didn’t know if the Google Earth creator had ever been one of them.

“I meet people everywhere who have lived at Meadowbrook,” he said. “Chicago, on the airplane, friends of friends.”

Schwada said he might try to use the news in some advertisements. But he’s not taking Meadowbrook’s place on the map for granted.

“I suppose,” he said, “that the city will try to get the focal point moved to City Hall.”