Hurricane, disease to drive up prices for orange juice

Estimates for Florida’s citrus harvest dropped 15 percent in the monthly crop report from the Agriculture Department, though the crop still will be about 8 percent better than last year when three hurricanes hammered citrus-growing parts of the state.

“That is way down from a more typical level,” said Keith Collins, the department’s chief economist.

Prices already are at seven-year highs and could rise at least 5 percent in the near term, said commodities analysts Jeff Gordon at Alaron Trading and Kevin Sharpe of Basic Commodities. A pound of frozen concentrate costs about $1.30.

“The crop got hurt quite a bit, and the canker continues to be an ongoing problem,” Sharpe said.

Citrus growers worry that the spread of canker, citrus greening and tristeza might do more damage than weather. Canker also is threatening nurseries in Florida. 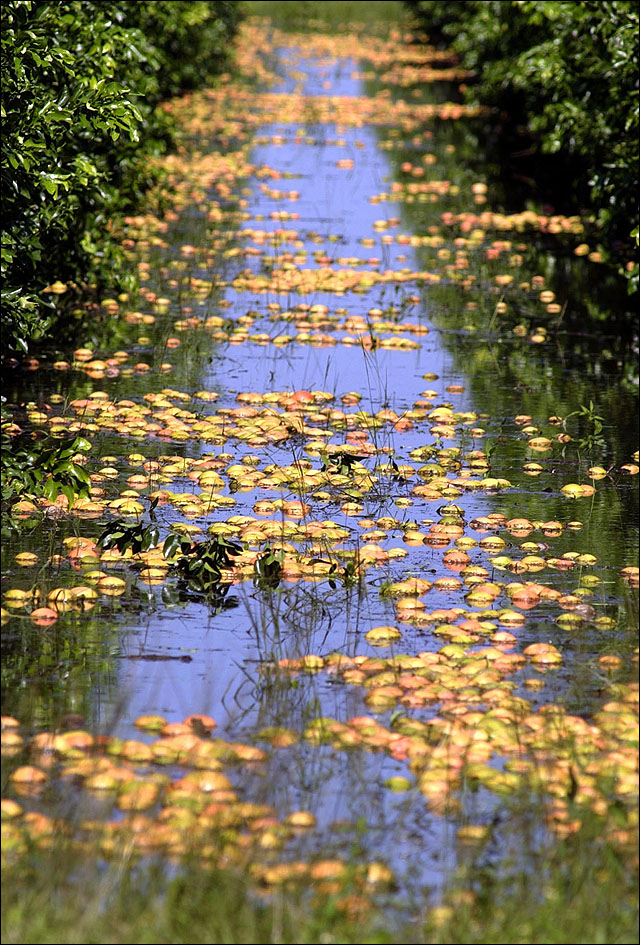 Citrus fruit floats in a flooded grove near Immokalee, Fla., after it was knocked from the trees by Hurricane Wilma in October. Wilma's late-season sprint across Florida will trim citrus production about 15 percent, federal officials said Friday.

“The whole citrus industry is facing a lot of problems besides just hurricanes,” said Jay Clark, who grows cattle and citrus in Hardee County.

Wilma entered the state as a Category 3 hurricane and blew through the southern growing region with 125 mph winds. The new Florida orange forecast is 162 million boxes, or 7.29 million tons.

Nationwide, the orange outlook is down 12 percent, to 9.44 million tons.

The weather was much better last month in other parts of the southeast, helping speed a cotton harvest expected to be the best ever, with record yields in Georgia, Kansas, New Mexico, Oklahoma and Texas.

Cotton production should reach 23.7 million 480-pound bales, the department said. That would surpass last year’s record by 2 percent. Nationwide, the expected yield per acre of 832 pounds would be the second-biggest on record.

The price forecast for corn was unchanged from last month at $1.60 to $2 per bushel, compared with $2.06 last year.