Robert Rankin’s unintended quest to salvage a near-extinct language began with a watermelon feed, a faux pas and the Lord’s Prayer.

“I had no idea things would turn out as they did,” said Rankin, a retired Kansas University linguistics professor.

Rankin, 66, has spent the past 31 years documenting the language of the Kansa or Kaw Indians, who were forced to move from Kansas to Oklahoma in the 1870s.

While searching for the last of the tribe’s native-tongue speakers, Rankin was invited to meet Maude McCauley Rowe, one of three surviving speakers, at a family watermelon feed in tiny Shidler, Okla., in the summer of 1974.

Rowe, then in her 70s, agreed to share what she knew. But when Rankin asked her to recite one of the tribe’s stories, she declined.

“She explained that in the Plains Indian culture, they don’t tell stories in the summer. They tell them in the winter,” Rankin said. 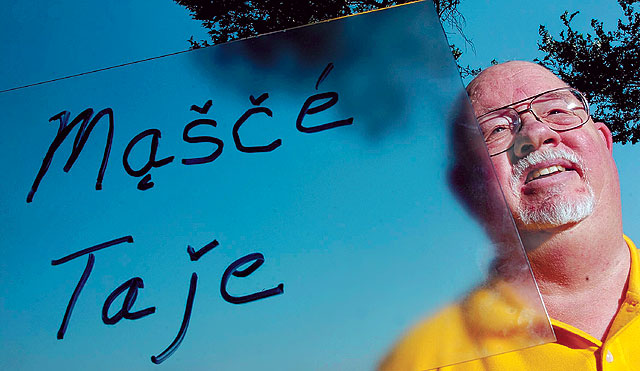 Robert Rankin, a retired Kansas University linguistics professor, is compiling a dictionary and grammar of the Kansa, or Kaw, Indians. Written on a piece of glass in front of Rankin are the Kaw words for hot weather, at top, and wind.

“When we met the next afternoon, I said I had some questions about some of the words in the Lord’s Prayer,” Rankin said. “When I opened my notebook and started reading what I’d transcribed, her mouth dropped open, her eyes got big and she said – exclaimed, actually – ‘How did you do that?’ She couldn’t believe it.”

Rowe had grown up believing her tribe’s language could not be written and, after her death, was sure to disappear.

Rowe asked for a photocopy of Rankin’s transcription.

“After that, when I was in (Kaw) people’s homes in northeast Oklahoma I would see framed copies of the Lord’s Prayer hanging on the wall – they were photocopies of her photocopy!” Rankin said.

Over the next three years, Rankin compiled between 50 and 60 hours of reel-to-reel tape recordings of Rowe translating words and phrases, sharing legends and telling stories. Rowe died in 1978.

Rankin made similar recordings with Kaw elders Walter Kekahbah and Ralph Pepper, the other two surviving Kaw speakers. Pepper died in 1982, Kekahbah in 1983.

“All the speakers of the language are gone now,” Rankin said. “All that remain are the tapes.”

The tapes’ contents, he said, are now on 55 compact discs.

With the help of a one-year, $40,000 fellowship from the National Endowment for the Humanities, Rankin is hustling to finish his Kaw dictionary and grammar manual.

The Kaw language is one of about 15 languages in the Siouan group.

Kaw is closest, linguistically, to the Osage and, to a lesser degree, to the Omaha, Ponca and Quapaw languages.

Omaha and Ponca are still spoken. Osage, Quapaw and Kaw are not.

The Kaw, Osage, Omaha, Ponca and Quapaw languages are part of the Dakota Sioux subgroup.

The process includes adding audio clips of Rowe, Kekahbah, Pepper or himself pronouncing each word to a computerized data base. Eventually, students will be able to click on a word and hear its pronunciation.

Also, Rankin is adding words and information found in the papers of James Owen Dorsey, a missionary who visited the Kaw in the late 1880s and made notes on the tribe’s language.

“Unfortunately, he caught yellow fever and died in 1896,” Rankin said.

Dorsey’s unfinished manuscripts were later found in several boxes in the Smithsonian Institution in Washington, D.C.

“After he died, there was no one to complete his work,” Rankin said. “It was neglected, basically.”

The Kaw language is similar to English in that it uses prefixes and suffixes but dissimilar in that they have little in common with their English counterparts.

“For example,” Rankin said, “there’s a word for removing bark from a tree and there are probably 10 prefixes that mean by fire, by hand or by foot, by pulling or pushing, by striking:”

Also, the Kaw language does not include past, present or future tenses. Instead, it uses what linguists call positional verbs: sit, stand, lie.

“Instead of saying ‘I am hungry,’ in Kaw it’s ‘I am hungry and I am sitting down,'” said Kaw Nation Language Director Justin McBride.

McBride, too, has received a National Endowment for the Humanities Fellowship. His task is to develop and make available teaching materials based on Rankin’s dictionary and grammar guide.

“To learn Kaw as a second language is tricky,” said the 30-year-old McBride, who has a linguistics degree from the University of Oklahoma.

As a language, Kaw is both literal and figurative.

The word for movie, he said, means “moving face writing.”

McBride is hopeful that the Kaw will someday be able to reclaim their language.

“I have two young students – they’re 10 and 9 – who are doing really well,” he said. “They definitely have the potential for becoming conversational in their youth. Whether they will or not, I don’t know.”

Rankin isn’t quite as optimistic. “I don’t expect (the language) to be brought back from the dead or that all Kaws will become fluent speakers,” he said. “But I do think it will be used in things like prayers and invocations, or meetings and powwows, which are important.”

Those events are important because they define Kaw culture.

“Language carries culture and cultures contain unique world views,” said Dan Wildcat, chairman of the American Indian Studies program at Haskell Indian Nations University. “Both are important and both should be preserved.”

“Your native language identifies you. It connects you to your culture,” Girty said.

The Cherokee language is not as endangered as Kaw. Studies have found that several thousand Cherokee still speak their native tongue.

“That’s good because for many years only the Cherokee elders spoke the language,” Girty said. “But today in parts of northeast Oklahoma, they’re teaching Cherokee in elementary school.”

But across North America, hundreds of tribes have lost their languages.

“When Columbus arrived, there were about 500 native languages in North America,” Rankin said. “Today, there are fewer than 200.”

The same is true, he said, in Australia, Africa, the South Pacific, Siberia and parts of Central and South America.

It’s a trend, Rankin said, that is proving difficult to reverse.

“Once a language is gone, you can’t get it back,” he said.