Women push and shove. They body-check each other. They get in brawls. They purposely fall to take out an opposing team’s player.

But this isn’t football or rugby. It’s a full-contact sport that involves roller skates, flashy outfits and — usually — fishnets.

And unlike pro wrestling, the bruises and the sweat are all real.

“It can get pretty rough out there,” says Mandy Durham — aka Princess Anna Conda. “But it also is a lot of fun.”

Women in Kansas City started a roller derby league — the Kansas City Roller Warriors — about a year ago. The all-female league now is part of a giant comeback for roller derby. But this time it’s absent the disco music and terry cloth-clad skaters.

The women are fierce. And with names like Maiden Hell, Red Ripper and Abra Cadaver, you don’t want to run into them in a dark alley.

But in the safe setting of the Winnwood Skate Center in Kansas City, Mo., people yearn to see them. 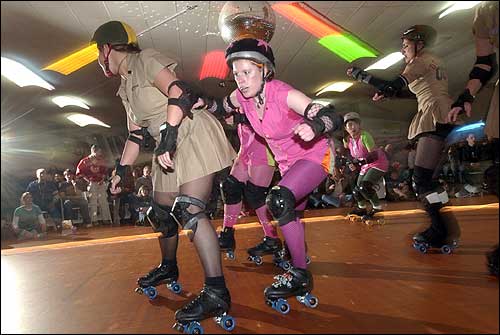 A Bionics jammer, center, designated by a star worn on her helmet, tries to sneak through a pack of Dogfightin' Dames blockers to score points. The Dogfightin' Dames took on The Bionics on March 19 at the Winnwood Skate Center in Kansas City, Mo.

“I usually sit on the couch and watch TV,” says skater Brooke Leavitt (aka Dirty Britches). “No one wants to pay to see me watch TV. But people want to see this. People want to watch roller derby.”

Under flashy colored lights and to a mix of house, ’80s and alternative music, the first two KC Roller Warrior matches between the Bionics and the Dogfightin’ Dames have been before sold-out crowds.

It’s a competitive event. But it’s also a form of performance art. It’s a spectacle, the skaters say.

An out-of-line skater gets sent to the penalty box — which is a decorated cardboard box. The skater from each team with the most infractions at the end of each round competes in a face-off, which could be anything from a pillow fight to a dance contest.

“It’s a freak show,” roller derby fan Brooke Corley says during a break between rounds at the March match. Corley was cheering for her friend Shelly Derks, also known as Kay-Oss on the Dogfightin’ Dames.

“I love it so much that I wish I was a girl so I could play,” derby fan Thomas Fahey says.

A popular sporting event in the 1970s and early 1980s, roller derby is back with a vengeance that’s sweeping the nation.

“Roller derby has just come on under our extreme sports division,” says Kellie Habeeb, director of media and public relations for USA Roller Sports. “It definitely seems like the new fad, and it’s really exciting.”

Why roller derby has become a new sports trend isn’t known. Many speculate women are looking for a way to be active and make friends but haven’t been interested in run-of-the-mill sports played in high school gym classes, such as volleyball or softball. 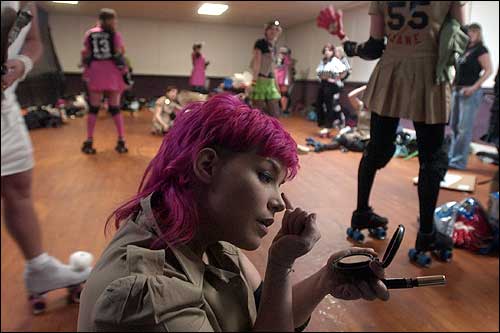 There are about 25 all-female roller derby leagues nationwide. They’re in Austin, Texas, Seattle, Tucson, Ariz., and Raleigh, N.C. — just to name a few. Most of them are in the beginning stages with only a handful actually holding matches.

Several women have called the Texas Rollergirls for advice, says league member Jennifer Wilson. The league has been around for about four years making its members the experts.

“It’s really amazing,” Wilson says. “I can’t believe so many people have wanted to do it. I’m not sure if they always realize how much dedication it takes. But it makes me happy to see that so many women are interested in it.”

Women involved come from varying backgrounds. Some are students. Many have jobs as office managers, graphic designers, teachers or librarians. They also range from 18 to 40 in age.

About 35 women are part of the KC Roller Warriors. But the league is on the lookout for more to join.

The prerequisites? You have to be 18 or older and have your own medical insurance.

“You don’t have to be a great skater,” Durham says. “We can help with that.”

Several KC Roller Warriors say they had friends involved with the league and decided to check it out, including Ai Osada.

Osada, 27, considered herself a glorified couch potato and she never skated before she joined the Warriors.

With her Dogfightin' Dames teammates yelling in support, Dee Claw, bottom, tries to get a hold on The Bionics' Poison Ivy during a pillow fight at the end of the second period. Because the two skaters had been assessed the most penalties in the period, they were sent to the Penalty Corner where the Die Master's roll of a giant die determined the penalty to be served: a pillow fight.

“I wanted to do something competitive,” says Osada (aka Snap Dragon). “I wanted something where I could be social and physical and relieve stress.”

Eanna Clark (aka Abra Cadaver) claims she’s always wanted to do roller derby. Johnson, 21, showed up at a parking lot for practice after being contacted through a Web site where she had roller derby listed as an interest.

“I would have joined up earlier, but I had to wait until after my wedding,” she says.

Women on the teams admit they don’t want to intentionally injure one of their fellow derby queens no matter how bloody it may get at times.

“Generally, we all get along well,” says Dogfightin’ Dame Michelle Arcand (aka Dominant Jean).