The chat took place at 1:20 p.m., Monday, Sept. 20 and is now closed, but you can read the full transcript on this page. 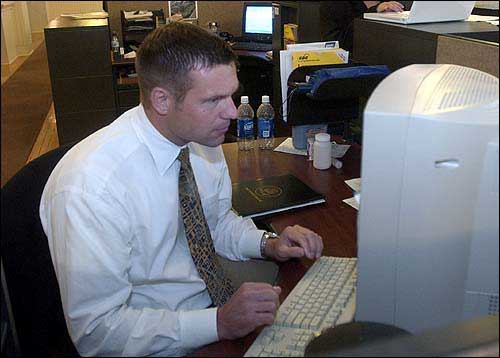 Kris Kobach, the Republican running for the 3rd Congressional District, takes part in an online chat on ljworld.com. Kobach is seeking the office now held by U.S. Rep. Dennis Moore, the Democratic incumbent.

Moderator: We’re expecting the candidate to arrive in any minute now. Thank you for your patience.

1. During the last online chat, you stated in regards to gay couples adopting children that: “Sociological (sic) and psychological studies demonstrate conclusively that this is bad for the children. Children raised by gay couples are more likely to become involved in drugs or crime, less likely to graduate from high school and are exposed to all kinds of psychological stress.” Please cite your sources for such a claim. I am not aware of such studies.

2. You seem very focused on limitiing immigration. Please tell me when and from what country or countries your family emigrated to the U.S.

Moderator: We’re still working on this question. Please stand by.

Kris Kobach: First, regarding your question on immigration, I am not focused on “limiting immigration.” I am focused on limiting ILLEGAL immigration. This is a critical distinction. Legal immigration is fine with me. Our country was built by immigrants, and immigrants continue to strengthen America with their talents and energy.

Illegal immigration, on the other hand, carries with it many problems. First and foremost, the terrorists of 9/11 proved that they were able to exploit the system to attack the United States. Three of the 19 were here illegally, yet there was no effective system in place to track them down. Criminal activity, especially drug trafficking, also correlates with areas of heavy illegal immigration. And the immigrants themselves are vulnerable. Because they lack documentation, they can be exploited in poor-paying jobs.

It should also be noted that one reason that America has been such a magnet to immigrants from around the world is that we have been a country that upholds the rule of law. For example, a new immigrant starting a business in America does not need to pay off local officeholders to stay in business. Illegal immigration threatens the very rule of law that makes America such an attractive place to settle.

My own ancestry is Bohemian and German on my father’s side, Norwegian on my mother’s side. My ancestors came to the United States in the 1890s.

Regarding the adverse impact on children who are raised in homosexual households, the studies are numerous. You might start with Dr. Paul Cameron, The Family Research Institute of Colorado Springs, “Homosexual Parents, Adolescents,” (1996) 31, 757-776.

Caleb, Lawrence: Keeping both a local and national perspective in mind, Gov. Kathleen Sebelius recently voiced her criticisms in the proposed Central American Free Trade Agreement, making Kansas one of seven states to reject the proposal. Where do you see CAFTA fitting in at the regional and national levels, and where do you see your congressional vote landing on this issue.

Kris Kobach: I favor free trade so I am not opposed to the concept of a CAFTA, per se. However, in order to earn my vote, such an agreement must not infringe upon the sovereignty of the United States. If a trade agreement placed unreasonable restrictions on state governments’ purchasing policies and regulations, then I would not support it. To be acceptable to me, a trade agreement must also preserve the right of the United States to fully enforce its immigration laws. These are a few of the tests I would apply in evaluating the desirability of a proposed CAFTA.

Dan, Lawrence: On your Web site, you list the priorities for your campaign (e.g. abortion, second amendment, and marriage). I understand it is important for the govenment to control and regulate marriage, however, why isn’t the ongoing war on terrorism and the war in Iraq priorities for you? Why are you focusing on the government’s regulations on abortions and marriages and not focusing on protecting us from terrorists? It seems like you are more concerned with appealing to the fringe in our party then protecting us from harm.

Kris Kobach: My Web site lists numerous policy statements beyond the ones that you enumerate. At the top of my priority lists are fighting the war on terrorism more effectively and reducing taxes. Voting for the Federal Marriage Amendment would in no way detract from these objectives. (FYI, supporting a constitutional amendment is likely to be one vote, not a complex congressional effort at “regulating” marriage.)

When it comes to terrorism, I have direct experience fighting this war as counsel to the Attorney General (2001-2003). I am running for Congress because there is much more to be done to close the gaps in our laws that the terrorists continue to abuse. I have led the enforcement of these laws, and I know what statutes must be fixed.

For example, under current U.S. law, membership in a terrorist organization is not a basis for deporting an alien from the United States. This is one of many legal flaws in our system that terrorists have already exploited. I will propose legislation to remove these vulnerabilities when I am elected to Congress.

I will also vote to authorize the deployment of the National Guard to our borders. After 9/11, we were able to accomplish a great deal in making it more difficult for terrorists to enter the country through our ports of entry. The terrorists realize this, and many are changing their tactics and attempting covert overland entry across our borders. The only effective response is to deploy the National Guard.

On these issues, my position stands in stark contrast to that of my opponent Dennis Moore. Dennis Moore has taken numerous votes that weaken our national security.

In 2004, he voted AGAINST deploying the National Guard to our borders. In 2004, he also voted to weaken the Patriot Act. And in 2002, he voted to block funding of ballistic missile defense systems. We need these systems now more than ever to protect us if terrorists (or state sponsors of terrorism like North Korea) acquire a nuclear missile.

I disagree with Dennis Moore on all of these votes. The 3rd District of Kansas needs a Congressman who takes the war on terrorism seriously.

Ryan, Lawrence: Mr. Kobach, there many jobs that do not have health insurance as part of their benefits packages to their workers. Could you please tell us your plan that would make sure that health insurance is available to all workers? Thank you.

Kris Kobach: There are two things that we must do if we are to expand the availability of health insurance to all workers.

First, we must pass tort reform to limit the frivolous lawsuits that are driving up doctor’s costs. For many doctors, their yearly insurance premiums are now over $400,000. Those costs are passed on to the health care consumer, resulting in massive increases in health care costs. It is estimated that if the HEALTH Act (which imposes reasonable caps on punitive damages) were passed by Congress, more than 4 million additional Americans would be insured. Dennis Moore voted against this act in 2004.

Moderator: This will be the last question of this chat.

Andrew, Overland Park: Thanks Kris for answering my question on this forum. My question is this, the 3rd District in terms of per capita income is among the nations highest, yet we seldom see our current Congressman out in front of the major issues that affect our district. As Congressman, how would you raise the profile of the 3rd District seat?

Kris Kobach: One of the reasons that our current Congressman has been so ineffective is that as a member of the minority party in the House, he has very little ability to push legislation through Congress.

In addition, because Mr. Moore’s views are so far to the left of his constituents’, he has avoided drawing attention to his votes in Congress.

In contrast, I will be able to take a lead in the war against terrorism from day one. I have testified as an expert witness before the House Immigration Subcommittee (in October 2003) and the Senate Immigration Subcommittee (in April 2004) on ways to improve immigration law enforcement in our efforts to win the war against terrorism. This expertise will allow me to hit the ground running.

Of course, my ability to take the lead is also affected by the amount of confidence that the House leadership has in me. Here’s what House Speaker Dennis Hastert had to say recently: “As a former Bush Administration official, Kris Kobach will be an influential player in the Republican House majority. He will be able to achieve real results for the people of Kansas.”

Moderator: Well, that wraps up our chat for this afternoon. We’d like to thank our readers and Kris Kobach for joining us.

We’re working to schedule in a chat with U.S. Rep. Dennis Moore, the Democratic incumbent, in October.

We’re also planning chats with the 2nd Congressional District candidates in the near future.