Nashville, Tenn. ? The school honor roll, a time-honored system for rewarding A-students, has become an apparent source of embarrassment for some underachievers.

As a result, all Nashville schools have stopped posting honor rolls, and some are also considering a ban on hanging good work in the hallways — all at the advice of school lawyers.

After a few parents complained their children might be ridiculed for not making the list, Nashville school system lawyers warned that state privacy laws forbid releasing any academic information, good or bad, without permission.

Some schools have since put a stop to academic pep rallies. Others think they may have to cancel spelling bees. And now schools across the state may follow Nashville’s lead.

The change has upset many parents who want their children recognized for hard work.

“This is as backward as it gets,” said Miriam Mimms, who has a son at Meigs Magnet School and helps run the Parent Teacher Assn. “There has to be a way to come back from the rigidity.”

Based on state law

The problem appears unique to Tennessee, because most states follow federal student privacy guidelines, which allow the release of such data as honor rolls, U.S. Department of Education officials said.

But Nashville school lawyers based their decision last month on a state privacy law dating to the 1970s — a law that’s not always followed because no one challenged the honor roll status quo. 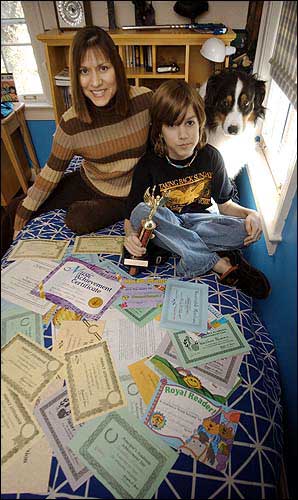 Walker Mimms, 12, a sixth-grader at Meigs Magnet School in Nashville, Tenn., is shown with his mother, Miriam Mimms, and dog, Strider, as he shows some of the academic awards he has won over the years. On the advice of school lawyers, some Nashville schools have stopped posting honor rolls out of privacy concerns.

School officials are developing permission slips to give parents of the Nashville district’s 69,000 students the option of having their children’s work recognized. They hope to get clearance before the next grading cycle — in about six weeks at some schools.

Until then, school principals are left trying to figure out what they can and can’t do.

“It’s for anything having to do with grades and attendance or anything normally reserved just for the student or parent,” she said.

Getting parents to sign permission slips won’t help protect students from being left out, but at least it will comply with the law, school officials said.

Christy Ballard, general counsel for the state Education Department, said she was “getting a lot of calls” since the Nashville decision, and would recommend that all Tennessee public schools get honor roll permission slips from parents.

But some school systems already get parents to sign a release before student information is made public. Others think it might be a good idea to get rid of the honor roll altogether, as Principal Steven Baum did at Julia Green Elementary in Nashville.

“The rationale was, if there are some children that always make it and others that always don’t make it, there is a very subtle message that was sent,” he said. “I also understand right to privacy is the legal issue for the new century.”

Baum thinks spelling bees and other publicly graded events are leftovers from the days of ranking and sorting students.

“I discourage competitive games at school,” he said. “They just don’t fit my world view of what a school should be.”

Parents at most schools, though, have been close to outraged with the new rule.

“So far, what we’ve heard parents say is ‘This is crazy; spend your time doing other things,'” said Teresa Dennis, principal at Percy Priest Elementary School. “It does seem really silly.”

A similar issue over student privacy went to the U.S. Supreme Court two years ago, when some parents objected to students grading each other’s work. The court sided with tradition in that case, ruling the long-standing practice of teachers asking students to swap papers and grade them in class does not violate federal privacy law.