Crews about to move house built in 1890

Preliminary work began this week on a project to move a three-story, 2,200-square-foot historic home from one site to another through a Kansas University-area neighborhood. Crews began digging a foundation Monday in a vacant lot at 1033 Ky. that soon will be the site of the transplanted Wilcox-Hunter house, which is moving from its present location at 1309 Ohio.

The home — built in 1890 by KU professor Alexander Wilcox — is being moved as part of a deal struck between the KU Endowment Assn. and a student-housing cooperative.

The private, nonprofit Endowment Association has owned the home the past three years since buying it from KU. The university wants to clear the property on Ohio Street to make way for construction of new scholarship halls. But members of the University of Kansas Student Housing Assn. didn’t want to see the home destroyed — partly because of its historic value, and partly because they want to expand their membership.

In a deal finalized Dec. 12, the Endowment Association donated the house to the cooperative, which isn’t affiliated with the university.

“It’s saving them the cost of tearing it down, so they didn’t charge us,” said Greg Seibel, who lives at Sunflower House, 1406 Tenn., one of the cooperative’s existing properties. 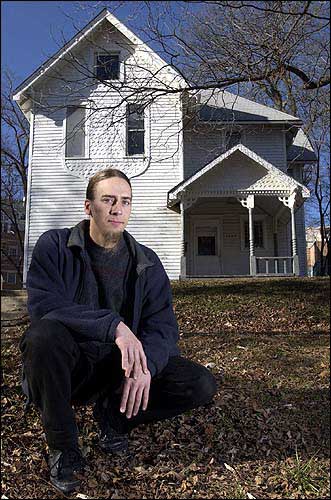 Greg Seibel, Lawrence, is overseeing the move of an older three-story house at 1309 Ohio to 1033 Ky. Once owned by the KU Endowment Assn., the home is being moved, rather than demolished, to a new location where it will serve as a local student-housing cooperative. Seibel is pictured Wednesday in front of the house.

It’s up to the cooperative’s members to oversee the move and renovations to the home on a budget of roughly $225,000. January 15 is the tentative date the home will be moved.

Seibel is the cooperative’s project manager. The general contractor for the project is Mark Lehmann, and the house-moving will be done by Wamego-based Valley Moving.

“They’ll put steel beams beneath it and jack it up,” then load it onto a trailer, drive it roughly four blocks and drop it onto the freshly poured basement at the new site, Seibel said.

At first, the plan was to drive the house down 13th Street to Kentucky Street, then up Kentucky to the vacant lot. But that had to be revised because there’s a major electric line at 11th and Kentucky streets, Seibel said.

The new plan is to drive it down Ohio, then down 10th Street, then down Kentucky.