Kansas is one of the slowest-growing states in the nation, according to U.S. Census Bureau estimates to be released today.

The state’s population grew by just 0.4 percent in the 12 months ended July 1, for only the 42nd-fastest growth rate among the 50 states and District of Columbia.

That trend was in line with other Census estimates showing Kansas had grown by 1.7 percent since 2000, to 2.74 million people from 2.68 million, also 42nd in the nation during that time.

Such slow growth can affect, and be affected by, the state’s economy, Hurd said.

“Without population growth, communities face a tightening labor market, lack of new customers for businesses, a shrinking tax base and an overall decline in economic activity,” she said.

“We will continue to focus on pieces we can truly impact: improving health care for all Kansans, making sure we have a strong education system and by continuing to improve the business climate,” said Nicole Corcoran, spokeswoman for Gov. Kathleen Sebelius. “We hope to attract more families to our state for years to come.” 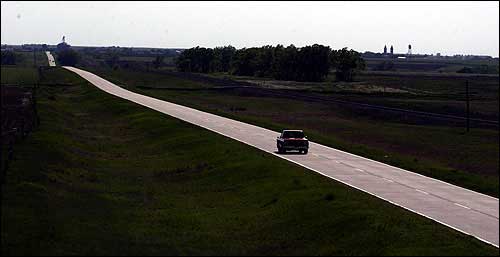 With less population in the western half of Kansas, there usually is quite a bit of open road between cities. Highway 255 looks small as it cuts through the green countryside between Victoria and Gorham in western Kansas.

Today’s report continues a series of bad demographic reports for the state:

l The Census Bureau reported last year more people were leaving Kansas than arriving. More than 276,000 people moved to Kansas during the late 1990s, but 284,000 people left for another state.

In response to such reports, Sen. Sam Brownback has backed the New Homestead Act in Congress, which would offer tax incentives to entrepreneurs willing to make their homes in declining rural areas. Brownback was not available for comment Tuesday.

Today’s estimates show Kansas’ neighbors are growing a little more quickly. Colorado had a 1.2 percent population increase in the past year, good for 14th-fastest in the nation; Oklahoma had 0.5 percent growth, which ranked 38th. Missouri and Nebraska both grew by 0.6 percent, good for 31st and 35th places.

Nevada, with 4.1 percent growth, was the fastest-growing state in the nation during the last year. Massachusetts actually lost population, according to the bureau, the only state to do so.

Kansas continues to grow, Hurd said, in part simply because births continue to outpace deaths across the state.

“It appears that Kansas continues to hold its own and is not growing as fast as its surrounding states,” she said.

State officials, however, were optimistic the trend would change.

“A study conducted for Forbes this year ranked Kansas as the most business-friendly state in the nation,” Corcoran said. “New business means new workers, which translates into new families in our communities, both big and small.”