They succeeded … at least for the first hour or so.

A couple of brief squabbles broke out in the morning practice between the teams Friday. No one was hurt in either fight, but a few punches were thrown, helmets were ripped off, and former pro wrestler-turned NFL hopeful Brock Lesnar walked around looking like he had just pummeled someone in the ring.

“You’d like to prevent them,” Chiefs coach Dick Vermeil said of the fights.

Tempers first blew last year at Kansas City’s training camp in River Falls, Wis. Vikings cornerback Rushen Jones made a hard tackle on receiver Dameane Douglas, who seriously injured his left knee in the process. That led to criticism from Vermeil, who told reporters Jones should be “shot in the head.”

This year, some Chiefs players still felt the Vikings were a bit too aggressive. After Chiefs backup tight end Billy Baber injured his knee after getting sandwiched by safeties Corey Chavous and Brian Russell, quarterback Trent Green said the Vikings were playing at a “different tempo” than what was agreed upon.

“Two years in a row now, we’ve lost a guy to a serious knee injury because of the tempo they choose to play,” Green said. “Somehow it needs to be addressed.”

Vermeil said Baber may have sprained his meniscus.

Baber, a special-teams regular who is entering his fourth NFL season, came down awkwardly on his left knee after Russell drove his shoulder into him. He attempted to get up, but screamed in pain as he went back down. 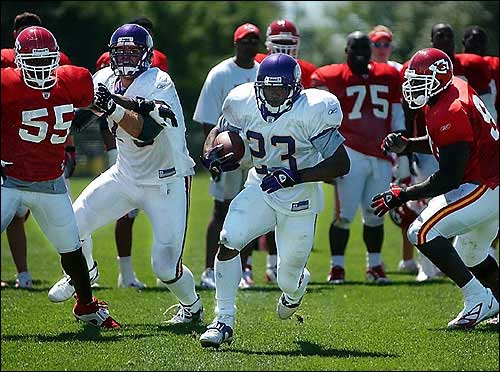 Minnesota running back Michael Bennett (23) splits the defense of Chiefs Gary Stills (55) and John Browning during a spirited scrimmage between the two teams. A handful of skirmishes broke out during the scrimmage Friday at the Vikings' training camp in Mankato, Minn.

Green felt the hit on Baber was unnecessary and might have led to the fights.

The first occurred after Lesnar assisted on a tackle on Chiefs running back Jonathan Smith. As Lesnar started to stand up, Jonathan Ingram pushed him off Smith. Lesnar retaliated, and several small fights ensued.

Then, during a special-teams drill, both teams converged on the Kansas City sideline as a mini-brawl broke out. It started after Chiefs players apparently dragged a Vikings player out of bounds.

Vermeil admitted his team’s guilt in that fight.

“That was our fault,” the coach said. “We had no business getting involved in that.”

“That’s football,” he said. “People are trying to win spots on their teams, and people are hitting each other hard. 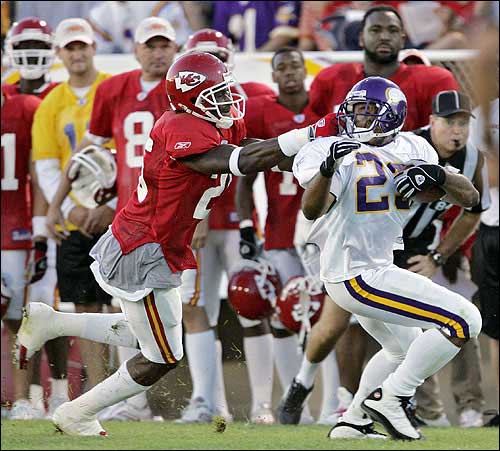