Scouts’ days in hot seat may be near end

After decades of tolerating summers of sweltering conditions in their downtown meeting rooms, a Lawrence Boy Scout troop is about to chill out.

“It’s a Jenny Craig workout room up there,” Rod Zinn, one of the leaders of Boy Scout Troop 52, said of the second-floor meeting place at 945 1/2 Mass. “The boys just roll with sweat.”

The unbearable indoor heat successions of Scouts have put up with since at least 1963 will soon end. Three businesses have answered Zinn’s call for help by offering to provide and install an air-conditioning unit without charge.

“These guys just bent over backward for us,” Zinn said of the businesses. “I’m humbled by it.”

The air conditioner, which includes the air handler that blows the air through the ducts, is used but still in good working condition, said John White, operations manager for Cloud.

Considering all of the contributions the businesses are making, White estimated that the troop and its sponsor, First United Methodist Church, would be spared at least $5,000.

The Scouts have relied so much on the church for help over the years that Zinn, who is the troop’s committee chairman, said he didn’t feel he could request thousands of dollars to install adequate air conditioning. The church has agreed to pay the expected increase in electrical bills, he said. 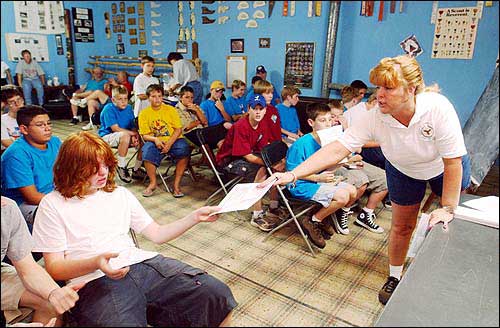 Boy Scout Mark Ashley, left, is handed a camping list from activities director Ralena McCurdy. Troop 52 met on Tuesday at 945 1/2 Mass. to go over an upcoming camping trip to Colorado. The Scouts went without air conditioning in the room for years, but now three local businesses have donated equipment and labor to help cool it.

The Scouts’ meeting place, which is above La Tasca restaurant, does have a window air conditioner but it is vastly inadequate, Zinn said.

“You have to stand within 10 feet of it to feel it,” he said. “I’ve turned it on in the morning, and when I’ve come back in the afternoon, it was just as hot.”

Mason McCurdy, one of the Scouts, agreed.

“It’s pretty uncomfortable,” Mason, 14, said. “There are windows, but they are so old not all of them will open.”

The troop, which comprises 61 Scouts, puts in an average of 2,000 community service hours a year, Zinn said. And although Scouts often camp out and work during the hot summer months, being inside a hot, poorly ventilated room is another matter.

“I think it has kept some of our Scouts from coming back, and I don’t want to lose them,” Zinn said.