COLUMBUS, OHIO ? Sharon Stimpfle still weeps when she reminisces about Sebastian, her Doberman pinscher, and the seven happy years he gave her.

“Sebastian was a soul mate. He was the best friend I ever had,” Stimpfle said of her 98-pound bundle of joy.

She was teaching him how to dance and spin and weave between her legs.

She would take him everywhere. At an outing to a pet fair, a mother pushed her stroller right under Sebastian’s legs, while the baby lay asleep. Sebastian grabbed the baby’s pacifier, tossed it in the air and caught it. The baby never even stirred.

He loved the pet fairs, and he loved going out, Stimpfle recalled.

So it seemed only natural that when Sebastian died in March from a viral infection in his liver, Stimpfle had his remains cremated, as she did with her five other dogs. All of their remains are kept in urns on the computer desk in the family room of her Lockbourne home. Some urns have the dogs’ pictures.

Pet cremation has grown in popularity as owners place more importance on their relationships with their animals, considering pets to be like family. As a result, owners are more comfortable expressing their emotion when the animals die.

These are the same people who seek out specialists to treat their animals for cancer or heart disease — much the same way people would be treated, said veterinarian Nikki Kelly.

Even nine months after Sebastian’s death, Stimpfle still sometimes takes the remains of her pets with her on car trips, depending on where she is going and which pet liked to go there. 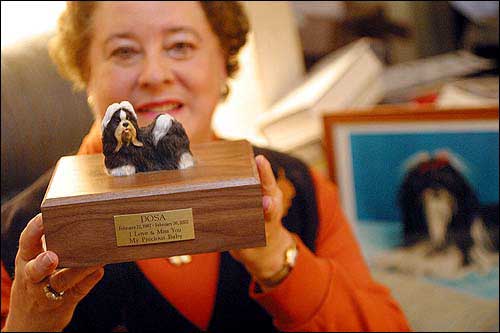 RETIRED TEACHER BARBARA LACEY, columbus, ohio, HOLDS the urn that contains the cremated remains of her Shih Tzu, Dosa. Lacey paid around 00 for the services, and was provided the wooden box containing the ashes.

“It brings me comfort,” she said.

Most clinics now offer cremation, though specific figures on cremations nationwide are not available. And any funeral home can arrange to have pets cremated.

Bill Remkus, owner of Hinsdale Animal Cemetery near Chicago, began cremating pets 10 years ago at the request of pet owners interested in the service. Today, the cemetery does up to 20 cremations a day.

“People nowadays are more open about expressing their feelings about companion animals,” he said.

And their motivation for having pets cremated reflects a change in society, added Kelly, who has practiced throughout Ohio.

Dogs and cats account for about 90 percent of the 2,000 cremations Schoedinger Funeral Service does annually. Goats, rabbits, even goldfish and an iguana have been cremated there.

In Ohio, state law requires separate crematories for animals and humans, but most states do not address the issue, said Jack Springer, executive director of the Cremation Association of North America in Chicago.

Costs vary depending on the weight of the animal and the choice of a private or group cremation.

At Schoedinger, the cost can range from $50 to $125. Owners can bring their pet to the funeral home or, for $25, have it picked up from a veterinarian’s office. Pickup at the owner’s home costs $150.

The funeral home also offers urns that range in price from $25 to $250.

Schoedinger said cremation gives people choices: They can keep the remains in an urn that can be easily taken from place to place, or bury or scatter the remains at their pet’s favorite spot. He said some owners even ask that their pet’s remains eventually be placed in the owner’s casket.

Schoedinger, a pet lover himself, started the service in 1995 as a way to help cover the costs of the crematory. Business has been increasing about 10 percent a year, he said.

Springer said crematories that offer their services for family pets endear themselves to potential customers.

Pet Cremation Services Inc., in business in Columbus since 1996, cremates mostly dogs and cats, but there have also been guinea pigs, a mouse and a 650-pound pig, general manager Gary Reynolds said.

The company averages several hundred cremations a month, at costs ranging from $40 to $150.

Some people want remains returned, others want the ashes buried.

Barbara Lacey said over the years, she would bury her pets’ remains. But when her beloved Shih Tzu, Dosa, died in February, she wanted to preserve a part of her. For 15 years Dosa had brought her so much joy.

“I thought so much of this dog. I had her so long. I love her so much. I couldn’t just put her in the ground,” said Lacey, a 63-year-old retired elementary schoolteacher.

She had Dosa cremated and keeps the remains in a wooden urn graced with a statue of a dog on top.