Tennessee State AD to be first woman to coach men

When Teresa Phillips decided to substitute for a suspended coach, the athletic director saw herself as Tennessee State’s only option.

She will make history tonight as the first woman to coach a men’s Division One basketball team. Phillips said she couldn’t give the job to the only remaining assistant in just his second season as a coach.

“No matter what the criticism may be, I felt they needed an authority figure on the bench,” Phillips said Wednesday. “With all the circumstances that have happened, it’s not like it’s been a normal year.”

Phillips will be the third coach this season for the Tigers (2-20). Nolan Richardson III quit Jan. 8 after admitting he brought a gun to a Christmas night argument with assistant coach Hosea Lewis.

The Tigers are mired in a 16-game losing skid. Lewis, the interim head coach, was suspended Wednesday by the Ohio Valley Conference because of a benches-clearing fight Monday night against Eastern Kentucky.

Chris Graves, who was the Tigers’ third assistant last season, was the only coach left. 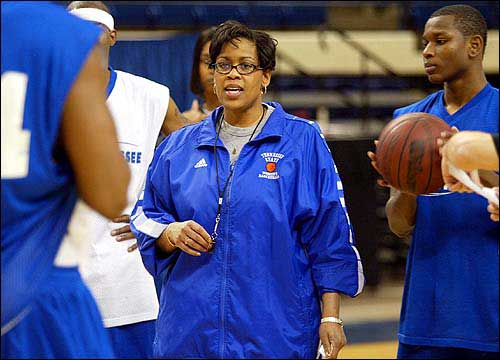 That prompted Phillips’ decision, which has been the talk of radio and television around the country.

But only two women ever have served as coaches for a men’s Division One team, and both were assistants: Bernadette Locke at Kentucky and Stephanie Ready at Coppin State.

“I don’t feel like I’m holding the banner up for anything,” Phillips said. “I’m trying to be supportive of our program and our team. We have a lot of healing to be done.”

Phillips has the experience. Her career record is 212-189 as a coach at Fisk and Tennessee State, where she took the Tigers to two NCAA Tournament berths. She also was an assistant at Vanderbilt.

She thought about just assisting Graves, but said she should take any flak from playing Austin Peay (15-6, 8-2), the OVC’s second-best team and winners of seven straight games.

The Tigers will be without two players, suspended for their part in Monday’s brawl. Josh Cooperwood is their second-leading scorer, and Cedric Bryson is their center.

“I’m a realist,” Phillips said, “so I really just want to put these young men in a position to have a good outing, represent themselves really well and going out to play to win.”

Austin Peay coach Dave Loos said he respected Phillips as a coach and administrator. He says he thinks she will do well, but he declined to comment about her decision to step in as acting coach.