Savannah, Ga. ? The stately charm of Savannah’s historic squares and antebellum homes becomes cloaked in gloom when viewed after dark from the back of a Cadillac hearse only recently retired from carrying caskets.

As the hearse creeps past Colonial Park Cemetery, top-hatted tour guide Carlo Cagna tells his six passengers how Union troops defaced many of its headstones during the Civil War. Some stones turned up missing.

True story? For more than a century, Savannah’s cobblestone streets and brick-and-stucco homes have been the backdrop to dozens of ghost tales. Guided tours of the city’s haunted hotspots are a nightly occurrence.

And now the American Institute of Parapsychology, which professes to investigate hauntings with scientific rigor, is staging a conference here that ends today to declare Savannah “America’s Most Haunted City.”

It’s a title claimed by several others New Orleans, Chicago, Philadelphia and Charleston, S.C. AIP founder Andrew Nichols, who has a doctorate in psychology and has investigated more than 600 ghost cases, acknowledges Savannah’s designation is more honorary than scientific.

“If I had to name the most haunted city, Savannah would be right up there,” Nichols said. “There are old structures that are relatively unchanged and haven’t been moved from their original locations. You’ve had a lot of people living and dying in Savannah.” 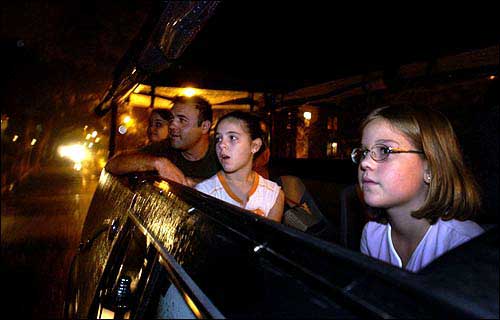 Quinn Albert, left, and his two daughters Lauren and Taylor, right, gawk during a ghost tour with Hearse Tours in Savannah, Ga. With a rich history dating to colonial times and plenty of age-old ghost stories, Savannah is about to be named the most haunted city in America.

The Marshall House hotel, where the ghost hunters are gathering, served as a military hospital during the Civil War. The ghost of a Union officer has been said to walk the halls at night.

The late antiques dealer Jim Williams whose murder trials were the basis of the book, “Midnight in the Garden of Good and Evil” had an exorcism performed on his 1796 home when workers reported strange laughter and screams. Williams says he woke to the sound of footsteps one night to find a man’s apparition next to his bed.

“Most of the really drastic stuff, that’s rare,” said Kathleen Thomas, a Savannah writer and photographer who founded her own ghost-hunting club, the Searchers, in 1996. “Most of it’s subtle lights flickering, flushing the toilets or turning faucets off and on, seeing things out of the corner of your eyes like shadows or lights.”

Perhaps not everybody believes Savannah’s ghost stories, but they’ve been good for the city’s thriving tourism industry. When Hearse Tours opened for business in July, it became the 21st operator offering guided tours of haunted Savannah.