Kansas City, Mo. ? A jury on Thursday awarded a cancer victim $2 billion in punitive damages and more than $225 million in actual damages in her case against a pharmacist who diluted her cancer drugs.

As the jurors left the courtroom, each of them hugged plaintiff Georgia Hayes.

“We wanted to send a message out to the world that it shouldn’t have happened in the first place,” juror Keith Freeberg told reporters outside Jackson County Circuit Court.

Hayes’ attorneys had asked for an award of about $1.2 billion against Robert R. Courtney, who has admitted weakening the chemotherapy drugs he mixed for Hayes and other patients.

Michael Ketchmark, one of Hayes’ attorneys, said his client had agreed to share any money she receives with the other plaintiffs in more than 400 lawsuits filed against Courtney.

Ketchmark said he must consult with his other clients, but “as a practical matter, this would probably bring an end to the separate lawsuits against Robert Courtney.”

After the verdict was announced, Hayes, 44, read a statement outside the courtroom thanking jurors and her attorneys.

“Though we probably will never see a dime, I feel justice has been done,” she said. 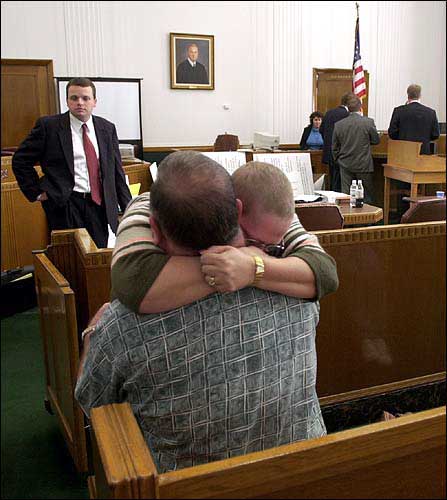 Georgia Hayes hugs her husband, Don, after a jury awarded her .2 billion in damages. Hayes is a cancer patient whose chemotherapy drugs were watered down by her pharmacist, Robert Courtney. The verdict was announced Thursday in Kansas City, Mo.

Hayes’ attorneys told jurors during closing arguments Thursday morning that they needed to send a message to Courtney and the world even though it was clear Courtney doesn’t have the money.

Most of Courtney’s assets, once estimated at $12 million, were seized by the federal government for a victims’ fund after he pleaded guilty to criminal charges of adulterating, misbranding and tampering with chemotherapy medications.

Ketchmark said he now planned to work on collecting whatever money he could from Courtney, including anything Courtney may receive from a book or movie deal.

“We will use this judgment so he doesn’t profit from his crimes,” Ketchmark said.

After hearing two days of emotional testimony, jurors were asked to decide whether Courtney’s dilution of Hayes’ chemotherapy medicine had affected her chances of survival and, if so, how much suffering it had caused her. It took the jury of eight women and four men a little more than two hours to decide. When the verdict was read aloud, spectators in the courtroom gasped.

Freeberg said there was no disagreement among the jurors, and that they chose such a large award because they wanted to send an even “bigger message” than Hayes’ attorneys had asked for.

“This is a loud message that you don’t do things like this,” Ketchmark said. “You don’t mess around with people’s lives.”

Courtney’s attorney, David Buchanan, said he was not surprised by the award.

“I think the entire community has been outraged,” he said, adding that even he identified with the victims because his father died of cancer.

“I’m sorry I had to get up and make those arguments.”

Courtney, who did not attend the civil trial, faces up to 30 years in prison when sentenced later this year. He being held in federal prison in Leavenworth, Kan.