You might think that Bob Mould, founder and front man for legendary, 1980s, band Husker Dand that Spin Magazine recently included in its list of the 50 greatest bands from the ’60s forward, could draw more than a few dozen of the faithful out to Lawrence’s Granada Theatre, even on a Sunday night.

Maybe the light turnout was bad timing Sunday night, finals, something. Mould has always enjoyed a strong following in Lawrence. On the other hand, the guy has never done anything the easy way. Now, supported only by his own startup label Granary Music, he’s touring to promote three concurrent releases, focusing on the dizzy brew of guitar and electronics-based songs on “Modulate.” 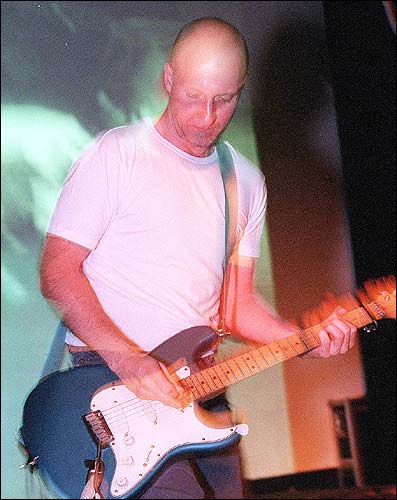 “Bob Mould’s Carnival of Light and Sound” employed the Granada’s massive projection screen for the display of films Mould and a handful of New York filmmakers produced as visual aids for the music. The films are only minimally narrative, and only then in a few cases. Seemingly random images of everything from computer generated visual effects and subway car interiors to vaguely homoerotic images and pastoral views by turns support or subvert the content of the songs. 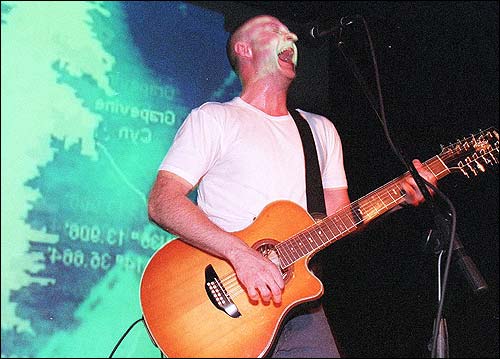 Though presented as a brave musical experiment, the new songs are very much in keeping with what Mould has become known for, unflinching guitar songs that speak of desire and loss, separation and celebration, performed passionately and which rock very hard. Sonically, Mould is staking out new turf but as a writer and a composer he’s still right where he’s most comfortable.

Mould doesn’t do himself any favors when it comes to presenting unfamiliar material to his fans. His vocals are low in the mix and singing through a chorus effect device, only sporadic words and phrases are intelligible to those that haven’t studied the lyric sheet.

Interesting songs such as “Slay/Sway” are buoyed up by the interesting tricks of the mind that the images on the screen play against the words that come through the tidal wave of sound. 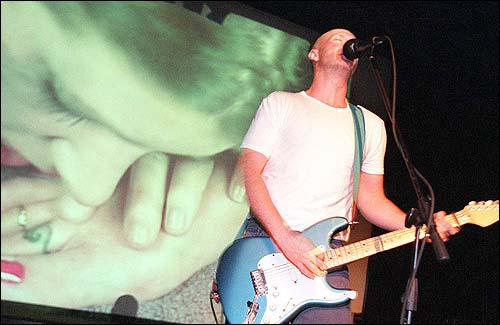 After a sequence where Mould performed Husker Dardly Getting Over It” and “No Reservations,” his ’90s band Sugar’s “Hoover Dam” and “Brasilia Crossed With Trenton” from his brilliant 1989 solo debut “Workbook,” Mould commented “back to the unfamiliar now, 20 minutes for you, 20 minutes for me.”

It hardly needed to be that way, the new songs are good and Mould is as emotional and skillful as ever. It’s just a bit of a shame that he let the experiment come between the songs and his audience.

As a reluctant encore for the sparse crowd, Mould performed “Makes No Sense At All” and “Man On The Moon,” sheepishly offered thanks and made his getaway.