In the swing of things

Dances offer fun for all ages

It’s an age-old dilemma for young people in Lawrence: When it’s time to have some fun and socialize, the options are somewhat limited.

The dilemma sounds familiar to many young people who are now regulars at swing dance nights, where they enjoy a low-key atmosphere filled with music and action. 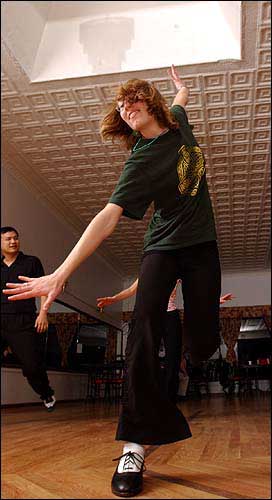 Jessica Elser, above, 18, lunges during a swing-style line dance.

Swing dance nights for people of all ages are offered at 9 p.m. Sundays at the Dance Academy, 1117 Mass., and at 9:30 p.m. Tuesdays at the Ecumenical Christian Ministries building, 1204 Oread Ave.

“It’s a nice, fun, safe environment,” said Ian Duermeier, assistant dance instructor at the Dance Academy. “You can’t smoke in the building, and there’s no alcohol. Everyone can come down here, basically, which is really nice.”

Swing nights have maintained their appeal for Duermeier since they started about seven years ago in Lawrence.

“I know people who’ve been going since I started they’re not tired of it either, so it’s gotta be fun,” he said. “And we’re always looking for new people.

“It’s really nice to have somewhere that’s all-ages that you can come and do this. We have had kids here as young as 5 that we’ve had at lessons, and we’ve had people as old as 95.”

Swing dancing is all about variety, from steps and combinations on the dance floor to the people who enjoy it. It isn’t confined to one age group or one type of people, and beginners are definitely welcome.

Angela Sodamann first got interested in swing by seeing it on TV and movies. About a year ago, she decided to give it a try.

“I finally met a couple of friends who were willing to go down to the Dance Academy and learn because I was scared to go by myself and take lessons,” Sodamann said. “I was hideously, terribly bad I was just about as bad as I could be. And I was so frustrated and determined that I just kept going back until eventually I got good. And then I learned how to lead!” 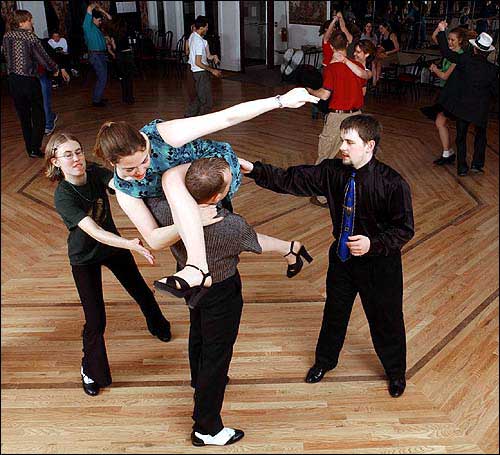 Getting started can be scary, she said.

“When you first start coming, you’re terrified, you’re just terrified, because everybody out there is so good, you just assume that they’re stuck up because they’re so much better than you, and they’re not. Swing people are the nicest people you could ever meet.”

“Most of us that have been doing it for a while now actually enjoy teaching,” said Mark Hellwege, a KU student.

Dancers have one thing fun in mind, he said.

“You go to a club and you ask someone to dance, they almost instantly think that your goal, your mission is to take them out,” Hellwege said. “But for swing it’s the general output that you just want to dance and you just want to go out there on the floor, dance for a song or two, come back off, and say, ‘Thank you.'”

“Everybody dances with everybody,” she said. “A couple can come and spend the entire night dancing with other people. People who are new don’t have to be intimidated about coming up and asking people who are better dancers to teach them something.”

The fun, the style, the practice and the payoff all these elements combine to make the swing atmosphere active, open and enjoyable to everyone from expert to beginner.

“I’ve been dancing now for an entire week,” said Emily Laut, a freshman at KU. “And you know, I thought I was bad, but already people are saying stuff like ‘Almost’ and ‘Nice recovery!'”

“That’s a good beginner compliment nice recovery!” Sodamann said. “I got that one a lot!”

For Zerbe, swing night is casual and comfortable.

“It’s a great way to unwind because you get a lot of physical activity,” she said. “I just like the interaction. You get these really great people hanging out.”

Rebekah Zemansky is a senior at Lawrence High School.