Miami ? The cruise industry had hoped 2003 would bring an end to the uncertainty that shadowed the business since the terrorist attacks. With the recent outbreak of stomach viruses on ships, the outlook for next year is even more unclear.

Industry executives and analysts were already wondering if the United States will go to war with Iraq, possibly prompting cruise passengers to stay home. Now the question is whether the string of well-publicized gastrointestinal virus outbreaks will affect future bookings.

The industry also is waiting to learn whether shareholders will approve a planned merger between No. 1 Carnival Corp. and No. 3 P&O Princess Cruises PLC.

The first signs of how the industry will fare overall in 2003, and whether it has been affected by the onboard ailments, will come in the upcoming “wave season,” the period between Jan. 1 and March when, traditionally, most cruisegoers book summer cruises.

“The question is whether passengers’ perception of the cruise sector changes in a long-term sense once news coverage (of the outbreaks) has faded,” said Robin Farley, an analyst with UBS Warburg.

Some passengers, including several boarding Holland America’s Amsterdam on its first sailing following a nine-day cleaning, expressed concerns, but opted to continue with their vacation plans.

John Ohlmann, of Melbourne, was one of several dozen who became ill last month on a Caribbean cruise aboard Disney’s Magic. He said the incident has not soured him on taking another cruise vacation.

“This did not deter me at all” he said.

Meanwhile, the industry is still recovering from the dropoff in revenue after the Sept. 11 attacks and waiting to see if world events will affect their business again. Two companies — American Classic Voyages and Renaissance Cruises — were forced into bankruptcy, while the rest struggled to fill their cabins. 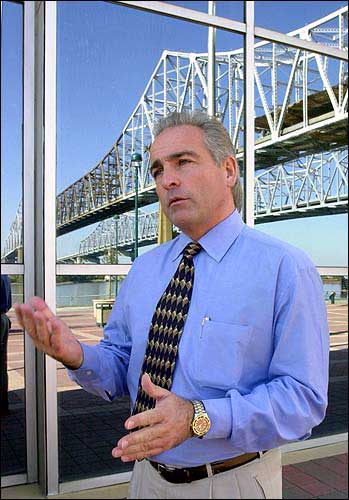 Steve Williams, director of medical Operations for Carnival Cruise Lines, talks with reporters in the Port of New Orleans. More than 200 guests on the cruise ship Carnival Conquest reported symptoms of a gastrointestinal illness on a recent voyage. With the recent outbreak of stomach viruses on ships, the outlook for next year in the cruise industry is unclear.

Cruise lines responded to the attacks by moving ships closer to home and to ports of call in secondary markets such as New Orleans, Baltimore and Corpus Christi, Tex. That trend is expected to continue next year.

“I see it in fact as the next great growth wave of this industry, bringing high-quality ships into all kinds of different ports with large populations,” said Colin Veitch, president and chief executive of Norwegian Cruise Line.

More than 90 percent of NCL’s cruises depart from North American ports. The cruise line recently announced it was adding departures from Baltimore, Houston and New Orleans, for a total of 12 U.S. ports.

“We probably would have gone there eventually anyhow, but 9-11 gave us an impetus to accelerate,” said Richard Fein, Royal Caribbean’s chairman and chief executive.

The strategy is in line with some analyst outlooks for next year, which favor cruises in the Caribbean and Alaska over Europe, whether or not there’s a war in Iraq.

Paul Keung, an analyst with CIBC World Markets Corp., said of cruise operators, “They’re having no problems filling ships as long as a consumer feels somewhat confident within a 30-day period.”

Micky Arison, chairman and chief executive of Miami-based Carnival, said the impact of a possible war will depend on whether it is a short or protracted conflict.

“If we are dealing with a relatively short war, I’m not overly concerned with the impact on the company,” he said.

Cruise prices have slowly crept up over the year, although prices for some December cruises have declined. Prices for cruises departing in January and beyond appear flat to up, according to a survey by Raymond James & Associates Inc.

If Carnival’s $5.4 billion takeover of P&O Princess Cruises is approved, it is not expected to have much impact on consumers, at least initially, said Joseph Hovorka, an entertainment and leisure analyst for Raymond James.

The Carnival-P&O merger would create a powerful new company with a fleet of 64 ships and market share approaching 50 percent by 2005. No. 2 Royal Caribbean’s 24 percent market share could decline to near 20 percent by 2005, said Jill Krutick, a leisure analyst with Salomon Smith Barney.

Royal Caribbean would remain “a powerful No. 2 player, and its young, high-amenity fleet should enable it to compete effectively,” she said.