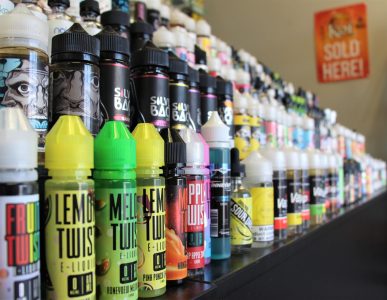 Vape shops often have scores, or even hundreds of e-liquid flavors. This shop in Topeka doesn't sell to people under age 21.

TOPEKA, Kan. — Cigarettes are so yesterday.

That’s why that old-fashioned, combustible path to a nicotine buzz wasn’t the top concern for a small group of high schoolers in Sabetha — a 2,500-person town about an hour north of Topeka near the Nebraska border — when they got city council to hike the minimum age for buying tobacco products to 21.

“I don’t really know anyone that smokes cigarettes around here because they’re really gross,” Sabetha High senior Kinsey Menold said. “Then, like, Juuls came in.”

The slender, chic vaping devices took off among teens in recent years. Notoriously easy to hide from parents and teachers, Menold says her classmates took hits of nicotine in the hallways, in the bathrooms — sometimes even in class.

“It was like our new thing instead of cigarettes,” she said. “Our new challenge, for our generation.”

Statewide, more than two dozen cities and counties have raised the age for buying tobacco and vaping products by three years, part of a national “Tobacco 21” movement that includes more than 500 city and county ordinances.

Yet enforcing those rules has proven tricky because of the gap between state and local law. That could change. This winter, health advocacy groups will press state legislators to make 21 the law of the land. 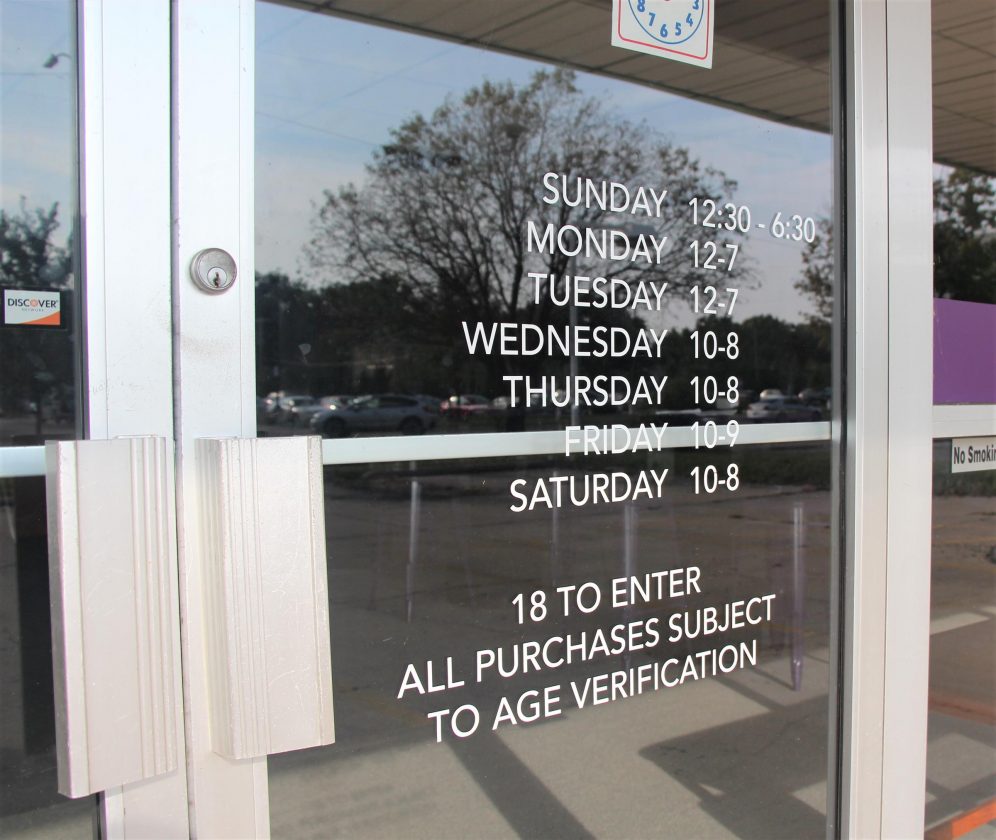 The city of Lawrence hasn’t raised the minimum age for buying tobacco, meaning 18-year-olds are allowed into vape shops like this one.

They’re bracing themselves for pushback from tobacco lobbyists. Major industry players support Tobacco 21, but their critics accuse them of co-opting the effort, leading in some places to watered-down laws that lack teeth or pre-empt other anti-tobacco efforts.

“Absolutely,” said Jordan Feuerborn, a lobbyist for the American Cancer Society Cancer Action Network. “We’ve seen this play out in other states.”

The law that her group will seek together with the American Lung Association, American Heart Association and others would target shop owners who flout the minimum age, rather than blaming the cashiers or teens who get caught.

No one has tried to enforce Tobacco 21 in Kansas longer than Wyandotte County and Kansas City, Kansas — an area with one of the state’s highest smoking rates and where most high schools sit within short walking distance of convenience stores that sell cigarettes and vape pens.

In late 2015, the combined city-county government kicked off the cascade of local ordinances that today cover a third of the state’s population, largely in northeast Kansas.

The change looked better in print than in practice. Two years into the new regime, Wyandotte-KCK put 130 shops to the test to see if they’d sell to someone under age. A quarter did.

The city-county government will ramp up compliance checks on cigarette and vape sellers, thank those that pass and urge the rest to do better.

“We don’t have any clear way of enforcement,” said Bianca Garcia, who is in charge of the city and county’s anti-tobacco efforts. “That’s why we’re looking into this reward and reminder program.”

It’s a soft-glove approach, but going after the cashiers who screw up doesn’t appeal to city-county officials. Nor can they suspend the licenses of the shop owners, they say, because the state licensing system only requires those shops not sell to minors.

A recent Kansas Health Institute* study found none of the state’s local ordinances have the necessary teeth to clamp down on problem shops. Health experts who applauded their passage now see them as only partial victories.

“We learned, we learned,” said Edward Ellerbeck, a University of Kansas School of Medicine professor who researches tobacco cessation. “I was at the beginning of this. I thought we were doing the right thing.” 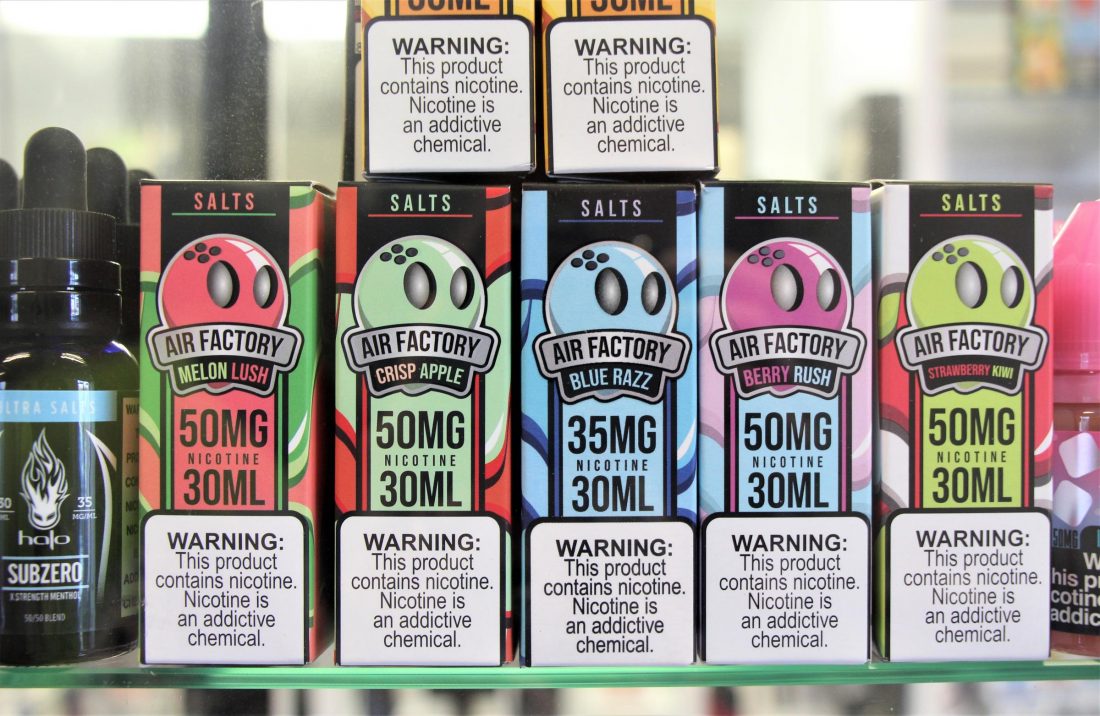 E-liquids for sale at Top Shelf Vapors in Topeka.

Anti-tobacco groups such as the American Cancer Society will hammer home that lesson while pushing legislators in the 2020 session for an air-tight Tobacco 21 law — with ample funding for compliance checks and solid penalties for businesses that don’t toe the line.

Addiction and the brain

Smoking remains the country’s top preventable cause of death, killing about half a million people per year. For every one of those, another 30 are seriously sick.

In Kansas, the Centers for Disease Control and Prevention estimated, health problems stemming from tobacco cost the state and its residents about $1 billion in a single year.

But cigarettes have enticed fewer and fewer new smokers as their death toll and massive anti-tobacco campaigns transformed public opinion.

In 2005, half of Kansas high schoolers reported ever trying a cigarette. In 2017, that was down to one-quarter. By then, though, vaping had arrived on the scene. A third had tried it.

High school journalists in Johnson County surveyed their peers and found a third said they owned Juuls, often puffing their way through more than one cartridge a week (roughly a pack of cigarettes).

Nicotine poses the greatest risk for these still developing brains, scientists say, because they’re most likely to end up wired for a lifelong habit.

Cities and counties saw a chance in Tobacco 21 to cut off a key nicotine pipeline to their minors: the many 18-year-olds still in school. Topeka battled to do so all the way to the Kansas Supreme Court.

“Tobacco use stopped at an early age can extend the life,” Mayor Michelle De La Isla said this June, when her city finally defeated a legal challenge that could have overridden local ordinances across the state. “Municipalities should be able to have (that) ability.”

A 2014 survey found most American adults support the higher age. Most smokers, too. 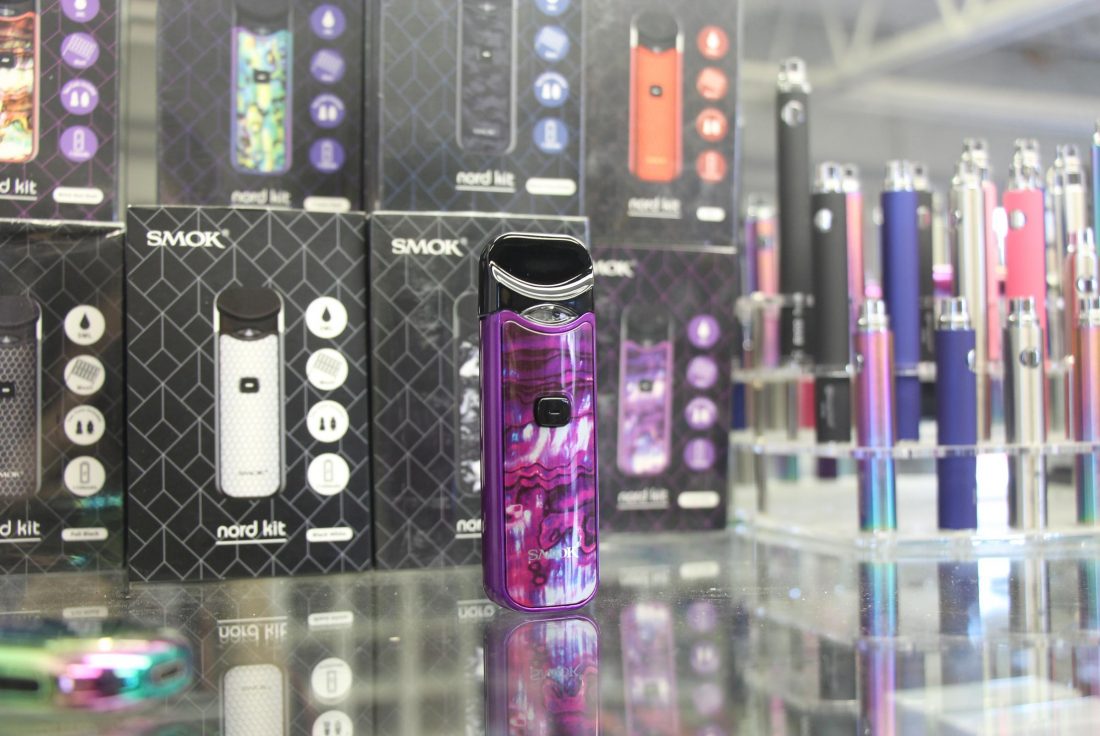 Cope’s bestsellers are Smok models. He stocks Juul pods, but doesn’t sell many and says they don’t appeal much to older customers.

Fruits and sweets sell best, and Cope bristles at the narrative that options like strawberry-lemonade target kids. Adults of all ages want to escape the taste of cigarettes, he says. Few people ask for tobacco flavor.

“A cigarette tastes terrible,” Cope said. “If you want to know, go lick an ashtray.”

Though cigarette giant Altria now has a hefty stake in Juul Labs, vape shop owners harbor no love for Big Tobacco, which they see as peddling poor health and quashing fledgling competitors.

Topeka’s Tobacco 21 ordinance means Cope can’t sell to 18-, 19- and 20-year-olds, but that hasn’t cost him much business, he says. Most of his customers were older — smokers who’ve ditched cigarettes or want to.

But Cope, himself a former long-time smoker who refuses to stock combustible tobacco, worries the non-vaping public has whipped itself into a frenzy of fear that blows the risk of e-cigarettes vastly out of proportion.

“Vapor is pretty safe,” he said. “At least 95% safer than smoking. And it should get a lot of credit for that.”

“I work at this every day and I see the transformation of people,” he said. “They all say, I can taste better. I can breathe better, I can sleep better. I have more energy.”

That “95%” comes from Great Britain, where an English public health agency argues vaping is that much safer, and that smokers should urgently switch.

The Royal College of Physicians agrees, calling vaping’s risks nothing compared to the potential “to prevent death and disability” by quitting cigarettes.

KU pulmonologist Matthias Salathe tests vaping on human respiratory cells. That British 95% ballpark isn’t based on trial results, he said, but rather assumptions about chemical content and carcinogens.

Salathe’s own findings in pre-clinical and animal trials have him worried that vaping could cause chronic bronchitis.

More than 1,000 people nationwide have sustained lung injuries from vaping in recent months. Most have so far reported using fluids laced with cannabis compounds. Public health officials in Kansas, where two people are dead, have urged people to stop vaping immediately.

Physicians in England and the U.S. alike agree on one thing: Whether vaping is safer than smoking or not, that doesn’t make it safe.

“The vast majority of youth that take up vaping,” Ellerbeck at KU said, “are not doing it to quit smoking.”

Juul in the crosshairs

Nationwide, litigation against Juul is piling up.

In Kansas, the Goddard and Olathe school boards announced lawsuits last month, accusing the company of marketing to minors and making schools divert precious resources to deal with the fallout.

Juul Labs has drawn criticism for ads that tobacco researchers say target teens in the same way cigarette ads did decades ago.

A Johnson County man sued, too, arguing he got hooked in high school and paid a steep personal price in just a few short years.

Juul Labs has said its products were only ever meant to help adult smokers give up cigarettes.

“If your campaign is nominally trying to reach middle-age smokers,” the University of California San Francisco professor said, “you don’t run it on Instagram promoting parties with hip 20-somethings.”

One of the many cigarette ads from the 1950s targeting teens, archived by Stanford Research Into the Impact of Tobacco Advertising.

In several cases, though, health advocates argue tobacco interests watered down the bills and the ability to enforce them through shrewd lobbying. They want Kansas to adopt clear enforcement funding and procedures.

Public policy and investment analysts at DC-based Beacon Policy Advisors say Tobacco companies glomming onto Tobacco 21 see it as “the lesser of two evils.” They’ve lobbied to at least include provisions that undercut other anti-tobacco efforts, such as flavor bans.

“There’s a general sense that tobacco companies are willing to make a compromise,” senior analyst Ben Koltun wrote in an email, “if it heads off potentially more negative developments.”

– Celia Llopis-Jepsen reports on consumer health and education for the Kansas News Service. You can follow her on Twitter @Celia_LJ or email her at celia@kcur.org. The Kansas News Service is a collaboration of KCUR, Kansas Public Radio, KMUW and High Plains Public Radio focused on the health and well-being of Kansans, their communities and civic life.