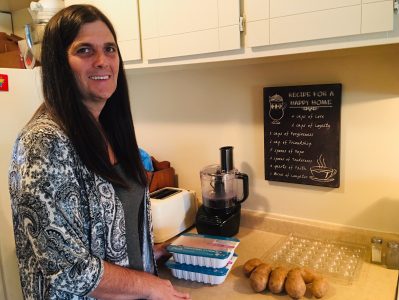 Lawrence resident Jamie Miller stands in her kitchen, Nov.12, 2019, ready to make ground turkey meatloaf for her family. She has altered her diet since being diagnosed with Alpha-gal syndrome, a type of food allergy to red meat, which has been linked to Lone Star tick bites.

The lingering effects from the bite of a tick have been haunting a Lawrence woman for several years.

Jamie Miller, 48, doesn’t know when she was bitten by the Lone Star tick. It might have been six years ago, because that’s when nausea and vomiting and other gastro-intestinal problems began, all symptoms of Alpha-gal syndrome or allergy, which is short for Alpha-galactose-α-1,3-galactose.

More prevalent in the southeast U.S., the Lone Star tick, which has nothing to do with Lone Star Lake near Lawrence, has been making its way west, carried by deer. The arachnid has a signature white dot on its back.

Alpha-gal syndrome, according to the Mayo Clinic, has only recently been identified as a type of food allergy to red meat. The condition most often begins when a Lone Star tick bite transmits a sugar molecule called alpha-gal into the body. It triggers an immune system reaction that later produces mild to severe allergic reactions when the bitten person eats red meat. Those with the syndrome may also react to mammal byproducts, including some that are in medications, cosmetics, vaccines, gelatin and dairy items.

“I was waking up in the middle of the night sicker than a dog,” Miller said. “It was like a light switch. As quickly as it came it would leave.”

At first, doctors told Miller she had irritable bowel syndrome. Then she was tested for Crohn’s and celiac disease. The problem would pop up hours after eating mammal products; however, she never saw the correlation until this summer. That’s when she was finally sent to an allergist’s office, where she reacted to beef, pork, lamb, cats and dogs. A blood test confirmed Alpha-gal syndrome.

Looking back, Miller realized there had been a pattern. Hours after consuming a steak or other mammal product she would wake in the middle of the night sick to her stomach. Along with nausea and vomiting, symptoms of the allergy may include a rash, hives, difficulty breathing, a drop in blood pressure, dizziness or faintness, and severe stomach pain.

“What makes this different is other food allergies cause reactions within minutes. Alpha-gal is hours later which makes it hard to diagnose,” Miller said.

Even with her increased awareness and caution, mammal byproducts can slip past her. Miller has altered not only her diet but the use of certain items from medications to laundry detergent. She has learned that even toilet paper can contain mammal byproducts.

Miller currently has 2,449 signatures on a petition at change.org requesting that the Food and Drug Administration require regulations on product labeling.

Recently, after eating at what she thought was a vegan restaurant, she had an allergic reaction so severe her blood pressure plummeted and she passed out. Now she keeps an EpiPen close by.

The only treatment is to avoid mammal products.

“This is considered a lifelong condition. People need to be aware because this is such a hard illness to diagnose,” Miller said. Her goal is to manage the allergy.

A U.S. Army veteran, Miller is being treated at the Veterans Administration Clinic in Topeka.

According to Diane Losey, Miller’s nurse practitioner, Miller is the only patient at the VA Clinic with Alpha-gal syndrome.

It was because of Miller’s persistence that the allergy was discovered.

“It was not on people’s radar,” Losey said. “But now it’s on mine. My focus is to get her healthy.”

What Losey appreciates is how Miller is taking a difficult situation and growing from it, learning as much as she can about the illness.

It has helped Miller to join the group https://alphagalinformation.org/ a nonmedical website that provides everything from links to the latest research to lists of recommended physicians around the country.

The best way to prevent the alpha-gal syndrome, according to the Mayo Clinic, is to avoid areas where ticks live, especially wooded, bushy areas with tall grass, and to always check for ticks after spending time outdoors.