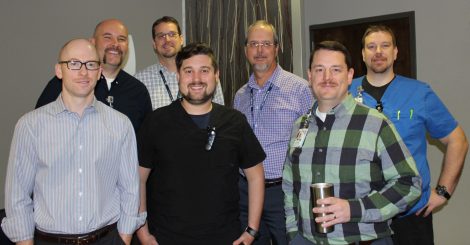 Movember, No-Shave November — no matter what you choose to call it, the goal remains the same: to raise awareness and funds for men’s health and stop men from dying too young. The Movember Foundation is a global charity that tackles men’s health issues year-round. It’s one of the largest men’s health movements in the world.

The statistics are startling. On average, men in the United States die five years earlier than women. Three of every four suicides are men. More than 250,000 men live with a testicular cancer diagnosis, and about 11% of men will be diagnosed with prostate cancer at some point in their lives.

Derrick Hurst, director of LMH Health’s Integrated Crisis Team, was introduced to Movember by his father, who had friends affected by prostate cancer.

“Movember gave me an excuse to grow a mustache, since my genetics limited me from an early age on my hairstyle options,” Hurst joked. “But the reality is that a lot of men don’t focus on their own health and aren’t comfortable talking about it with each other. Movember creates opportunities for those conversations.”

As his involvement continued, Hurst was excited to see the movement take on mental health awareness as part of the cause. That focus has kept him participating for the past eight years.

“Mental health awareness and suicide prevention are incredibly important areas of need within our own community,” he said. “Mental health affects all of us and we don’t talk about it or focus on it enough.”

Both men and women can get involved in the annual Movember campaign. The foundation encourages men to participate by growing a mustache to inspire donations and conversations during the month of November. If you can’t grow a mustache, commit to move and get active for men’s health. Challenge yourself to move 60 miles in November for the 60 men lost to suicide each hour.

Visit us.movember.com to sign up and start taking action. LMH Health believes in being a partner for lifelong health. Let’s raise awareness and create opportunities for discussions for all the fathers, brothers, sons and mates in our lives.

— Autumn Bishop is marketing communications manager for LMH Health, which is a major sponsor of the Lawrence Journal-World’s health section.