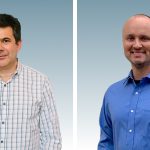 Pictured at left is David Goldhill, co-founder and CEO of Sesame. At right is Dr. Ryan Neuhofel, of Lawrence, chief medical adviser for Sesame. The online service, which launched in early 2019, allows patients to book appointments with health care providers and pay cash upfront.

You can buy just about anything online these days — now including doctors’ appointments. A new company is making that possible for folks in northeastern Kansas and the Kansas City area, but it has a broader goal of changing access to health care as we know it.

The company is the brainchild and passion project of David Goldhill who, among other previous positions, has been the president and chief operating officer of Universal Studios and CEO of Game Show Network.

After his father’s death from a hospital-acquired infection in 2007, Goldhill’s “survivor’s grief has taken the form of an obsession with our health-care system,” he wrote in a 2009 article for The Atlantic called “How American Health Care Killed My Father.”

Goldhill told the Journal-World in a phone interview that his focus has been on improving the patient experience, the economics, quality, appropriateness and safety that “are crucial to good care.”

“Health care is one of the things where I think you can create a service that actually is better for both sides,” Goldhill said, referring to both doctors and patients. “There’s not a lot of things like that.”

Goldhill and Neuhofel have known each other for a few years now, united by a shared interest in health care — and more specifically, in fixing a health care system that they’ve both described as “screwed up.”

The Journal-World reported in November about the direct primary care (DPC) model that Neuhofel’s practice follows. Put simply, it allows patients to pay upfront membership fees for access to their primary care doctors. DPC providers do not bill insurance. Though doctors create their own individual business models, generally they offer patients pricing upfront if a procedure or test will require any extra charges, and they offer routine testing at or near cost.

Neuhofel’s and Dr. Jennifer Smith’s Accomplished Health & Wellness are the two DPC practices in Lawrence listed through the Midwest DPC Alliance. Both have services available on Sesame.

Many providers listed on Sesame still follow the traditional insurance model in their day-to-day practices, Neuhofel said, but the website is introducing them to the more streamlined cash-pay system and allowing them to offer those appointment slots to patients who would benefit from them.

Neuhofel said Sesame, similar to DPC, has two target demographics: the uninsured, and those with high-deductible insurance plans. The website is available to anyone, however.

“This is one of the few places they can go to actually find a wide spectrum of affordable care and purchase it, so we’re really happy that we can serve those people,” he said.

Sesame is growing quickly since its launch earlier this year — Neuhofel said there are more than 100 providers now on board, offering 500 to 600 services. They’re primarily in the Kansas City, Lawrence and Topeka areas right now. The company, headquartered in New York City, selected this region as its test market because Neuhofel and other providers in the area played a large part in determining how the platform can work, Goldhill said. Down the road, it will aim to replicate the technology in other markets.

Many of the services are offered at discounted rates. For instance, as of Saturday, a radiology nurse in Overland Park had several open appointments this week for MRIs for $79 — scans that can cost patients thousands through some insurance plans. There are eye exams listed for $19; teeth cleanings for $29.

That’s actually been a bit of a problem for Sesame. Skeptics see the prices and think it’s a scam.

“We’re hoping over time that we don’t have to keep saying, ‘No, it’s real,'” Neuhofel said. “That’s kind of been our biggest thing so far, but I guess that’s a good problem to have.”

Neuhofel said Sesame is also helping doctors whose practices are still growing, and those who just have the occasional open hour to fill.

“Just like a barber or anyone else, if their chair is empty, that’s not great for the business,” Neuhofel said.

Neuhofel and other members of the Sesame team — including Dr. Allison Edwards, who founded Kansas City Direct Primary Care — vet all providers before they’re listed. They check licensure and board certifications, and they look for any red flags in providers’ work histories.

“We definitely want to try to curate a group of not just licensed medical providers, but really great ones, as well,” Neuhofel said.

Neuhofel said the team has been trying to recruit some of the best physicians they know. The logistics are still in the works, but as Sesame scales up, Neuhofel said the company eventually wants patients to be able to share feedback on providers.

“We do this in almost every other area of our lives,” Neuhofel said, listing flights, hotel rooms and even groceries as examples. “Technology has made the experience better and easier.”

Some members of the Sesame team have also contributed posts for a blog at medium.com/sesame. Goldhill’s introductory post from Feb. 19, “Open Sesame: A First Step in Fixing American Health Care,” provides a bit more information about the Sesame marketplace and his vision.