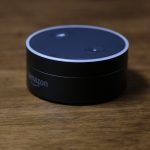 This March 2, 2016 photo shows an Echo Dot in San Francisco. Amazon.com is introducing two devices, the Amazon Tap and Echo Dot, that are designed to amplify the role that its voice-controlled assistant Alexa plays in peoples homes and lives.

I have a somewhat irrational fear of falling to my death on snow and ice, so I basically haven’t left home unless it was completely necessary since November-ish.

At some point midwinter, I woke briefly from my hibernation to purchase an Echo Dot from Amazon so that I could turn off the lights without having to expose an extremity to the chill of my pathetically insulated apartment. But upon installing Alexa, I realized the device could be the key to getting my blood flowing again.

The Echo Dot’s voice recognition technology is capable of various “skills” that users can enable from its accompanying smartphone app.

In my opinion, after a couple months’ experience with both, Alexa does not do as well with basic smarthome tasks as Google Home devices — Google hears better, its speakers sound better when it plays music, and it’s less easily confused about which lights you want to turn on or off, for instance. And you can probably guess which one is better at searching the web for information.

Alexa, however, is more apt for fun stuff. Alexa has a wider range of audio games, for instance, and there are several options for health and wellness-related skills: it can talk to Fitbit, guide you through a meditation or, as I discovered, help you exercise.

This is a rapidly growing area of technology, and it’s still got some kinks to iron out. There aren’t quite as many workout skills as I was hoping to see, but there are a few available for Alexa. I’ve tested some in the past few weeks as I’ve been waiting for the sun to come out.

The one I really liked was “PopSugar Active.” The fitness company PopSugar does target women with much of its online content, but the Alexa skill really could appeal to anyone. Most of the workouts are in the range of eight to 10 minutes, beginning with a short warmup and then proceeding through a circuit of exercises once or twice.

PopSugar offers several features I liked. It explains each workout the first time around, so you don’t have to just guess what it’s trying to tell you to do. It also has upbeat music to go along with each exercise, which kept me going at a quick pace and definitely added to the efficiency of the workout.

It also offers a good range of types of workout — cardio, core and full-body, and then more options within each type. Among the five cardio options are low-impact cardio, at-home aerobics and crunch-free abs, for instance.

Another skill I tried was “7-Minute Workout.” I tried this one first and was sort of annoyed, overall.

The very first exercise required a chair for step-ups, which I didn’t have, and it didn’t offer any prior warning that I’d need equipment. As a disclaimer, I haven’t tried a PopSugar workout yet that required equipment, but I don’t know for sure that none of them do.

There’s no music in 7-Minute Workout — just silence between its instructions — and it doesn’t give any description of what you’re supposed to do for the exercise, so if you don’t know, you’re out of luck. It also asks if you’re ready in between each exercise, which could be nice for some people but should be an optional feature for those of us who don’t want to bark “Yes” across the room several times during our workouts.

I also tested out an app called “6-Minute Full Body Stretch,” hoping it might be good for post-workout stretching. That’s not what it’s intended for, though. It’s extremely slow-paced, and it starts with neck stretches, so I bailed on that one before my calves permanently molded themselves into a dense state. It could be nice for anytime stretching, though, just to relax.

There are some others that I haven’t tried yet, such as 30-day pushup and plank challenges. There are also some breathing exercises that could help relieve stress and clear the mind.

So in the event of another freak snow or ice storm, or if this March turns out to be more lion than lamb, remember that Alexa can do more than order Domino’s.