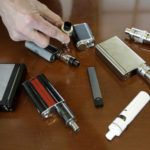 With the rise of a new generation comes the rise of new trends — some fashion, some habits and some social. Years ago, ads and celebrity endorsements for smoking showed it as a sign of class and style.

Now smoking is banned in most buildings and you see ads about the dangers of cigarettes because of their harmful effects on the body. Though the smoking trend seems far behind, vaping is on the rise more than ever — and Lawrence high schools are no exception.

Vaping is the inhaling and exhaling of a vapor produced by an electronic cigarette or other electric smoking device. Vaping has become popular because of its many flavors and sleek designs that are easy to take on the go and to hide.

The Centers for Disease Control and Prevention (CDC) reports that in 2018, more than 3.6 million U.S. middle and high school students had used e-cigarettes in the past 30 days. Of those students, 4.9% were middle school students and 20.8% were in high school.

“The pulmonologists on the LMH Health medical staff are all against vaping,” said Dr. Charles Yockey, a pulmonologist with Lawrence Pulmonary Specialists. “Your lungs were created to breathe in clean air. You cannot inhale a foreign substance and expect your lungs to be healthy.”

Teens and young adults have vaping parties and think it is the cool thing to do. Because of the popularity of vaping, young adults are becoming more and more addicted to nicotine at increasingly young ages. Vaping products still contain nicotine and many other addictive and toxic chemicals.

“When people started smoking, they didn’t know the damage it would have on their lungs,” Yockey said. “But years later, we see people having serious health issues from past smoking. Vaping has not been around long enough for the people who are doing it to see what the damage will be on their lungs. We say now it is better than smoking, but in 20 years from now we may find out that vaping was not OK.” 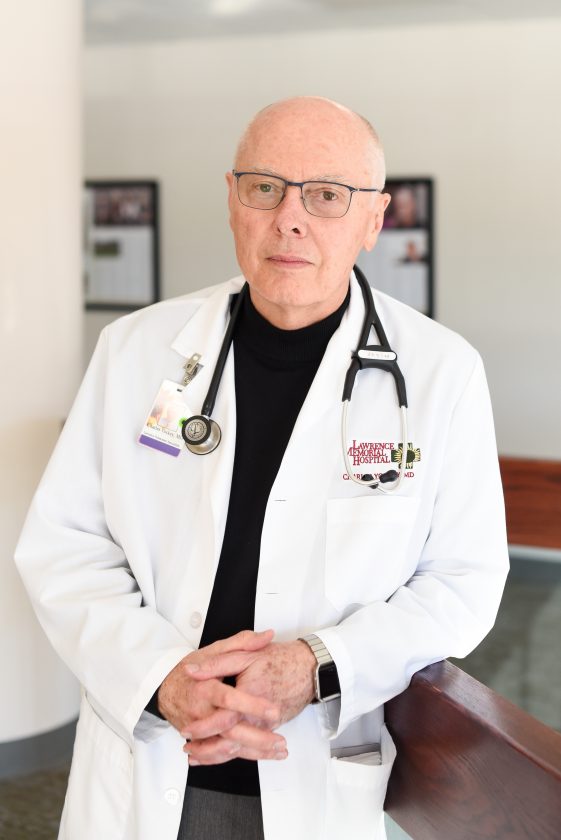 Vaping has been shown to be slightly safer than smoking. It is less toxic, but Yockey said it still has the potential to have the same effect of a plain old cigarette.

“People will see me and tell me they are trying to stop smoking and have started vaping to wean them off,” Yockey said. “Well, what we’ve found is people are vaping, but they are still smoking too. It’s like wearing a nicotine patch and still smoking; it just doesn’t make sense.”

The device itself sometimes causes harmful chemicals to be released. Since you do not know what is in these devices and you cannot control them, it is hard to say anything is positively safe.

“On an electrical smoking device there is an electric coil,” Yockey said. “When that coil gets too hot, it gives off a chemical that produces formaldehyde. Formaldehyde is used to embalm bodies for preservation. When this chemical is released and formaldehyde is being inhaled, you are literally embalming your lungs.”

Although secondhand smoke from vaping is less than with regular cigarettes, when people are vaping all around you, it is easy to be concerned if it is affecting your health as well. Amani Austin, Ana Tosta and Mollie Coffey, LMH Health Academy interns, say that vaping is very prevalent in their high schools.

“It is constantly happening,” Coffey said. “People are smoking in the halls during passing periods, in the bathrooms where there are herds of people vaping all together and even in the classroom. It’s cool to do, and it’s cool to brag about what you can get away with.”

The legal age to own any tobacco product in the United States is 18. The interns agree that people of all ages are vaping in their high schools, and sometimes the freshmen and sophomores are the ones doing it the most.

“It is easy to buy a Juul and get away with it as well,” Tosta said. “People will buy them on Amazon or eBay and the receipt looks like they bought a USB stick. Parents are becoming more aware, but sometimes they won’t check what their child is buying online. If they do and it looks like a USB stick, they’ll think they’re just buying school supplies. They’re overwhelmingly easy to access and easy to hide anywhere.”

Since vaping does not have a strong smell like cigarettes, it can be easier to get away with. The vapor may taste and smell like fruit and cotton candy, so it is harder to detect when someone is vaping. Since the smell is not bad, it seems less threatening. Since it is so small and compact and does not need to be lit, it does not look intimidating.

“It feels like teachers often don’t take this seriously,” Tosta said. “It doesn’t look or seem intimidating so the rules are often not enforced. It’s taken lightheartedly and I’ve known very few people to get in serious trouble because they’re vaping in school.”

Teens are becoming addicted to nicotine without realizing it. They think it’s cool; it seems to be the newest trend and people want to be a part of it. However, it doesn’t just affect the people who are vaping, but the people who inhale it secondhand as well. Secondhand smoke from a cigarette may be more intense than from vaping, but you are still inhaling nicotine.

“You can make your own choice on whether or not to vape,” Coffey said. “But we are required to be in school, and when you vape in school and I inhale it, it affects my lung quality. If you want to risk damaging your lungs, you can, but please don’t risk ruining mine.”

Austin said it can be very distracting in class. People will vape and discreetly blow the smoke into their shirts and the teachers will never know. It can also be an issue when you or those around you have reactions to the flavored vapor.

“I want to go to school, enjoy my time and be able to focus on my work,” Austin said. “It is distracting and when it’s happening all around you it makes it tougher to breathe. It’s hard to do my work when I am constantly standing by the tissue box.”

All three interns said vaping doesn’t seem regulated in their schools. Though it is illegal for those under 18 to vape, it doesn’t seem like a big deal and therefore it isn’t enforced as a bad thing.

Tosta said vaping needs to be enforced similarly to having other drugs in schools. Austin said that when someone smokes cigarettes in school and is caught, more serious action is taken. For vaping, repercussions are not enforced properly.

“People used to think it was cool to smoke under the bleachers,” Austin said. “Well, instead of underneath the bleachers, now it’s in the classroom.”

— Jessica Brewer is the social media and digital communications specialist at LMH Health, which is a major sponsor of the Lawrence Journal-World’s Health section.