Amid outbreak, Kansas to require additional vaccines for schoolchildren 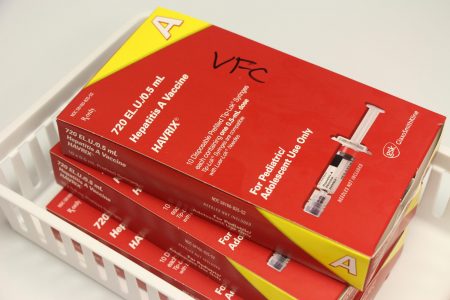 Vaccines against Hepatitis A and four types of meningococcal disease will be required for some grades in Kansas come August.

TOPEKA — Kansas schools will require two new vaccines come August, including one against a virus that’s hospitalized 13,000 people and killed 200 across the country since 2016.

The new rules, which apply to public and private schools, will be phased in over the next several years. But come August, schools will check that:

Get vaccinations in Lawrence

The two new vaccines that the Kansas Department of Health and Environment are requiring for schoolchildren are available at the Lawrence-Douglas County Health Department, according to Clinic Supervisor Kathy Colson.

The meningitis vaccine costs $129 and the hepatitis A vaccine for anyone 18 or younger costs $50. The clinic accepts all insurance, and those 18 and under may qualify for the federal Vaccines for Children program.

For more information, call the clinic at 785-843-0721. Get in line for immunizations during clinic hours via the QLess mobile app, or visit ldchealth.org and scroll down to click on QLess.

• Kindergartners and first graders have gotten hepatitis A vaccine.

• Seventh graders have had their first dose of a MenACWY, a vaccine against four types of meningococcal bacteria.

• 11th graders get a dose of MenACWY, too (even students who received a first dose when they were younger will need a booster dose).

Kansas allows exemptions for medical and religious reasons, but not philosophical reasons.

Nationally, 25 states have seen more than 20,000 cases of hepatitis A in widespread outbreaks since 2016.

Most people shake off hepatitis A in a matter of weeks, the federal Centers for Disease Control and Prevention say. But others fight the illness for months, suffering from symptoms such as diarrhea, fatigue, vomiting, fever, jaundice and stomach pain. The liver infection often spreads through contamination in water, raw or undercooked foods or through sex.

Kansas hasn’t seen any recent cases, though its neighbors have. More than 300 in Missouri and nearly 100 in Colorado have gotten sick.

No evidence links vaccines to autism, a myth that got its start with a debunked academic article.

Last month, the federal panel of health experts that sets vaccine guidelines recommended children and teens who missed the hepatitis A shots as toddlers get them now. In Kansas, federal data suggest more than 85% of children receive it as toddlers, in part because it was already required for day care.

Fewer Kansans get the MenACWY vaccine. Meningococcal bacteria cause, among other things, meningitis. People living in close quarters, such as college dorms, are at higher risk of contracting meningococcal disease.

— Celia Llopis-Jepsen reports on consumer health and education for the Kansas News Service, a collaboration of KCUR, Kansas Public Radio, KMUW and High Plains Public Radio focused on the health and well-being of Kansans, their communities and civic life. This article was originally published at ksnewsservice.org.