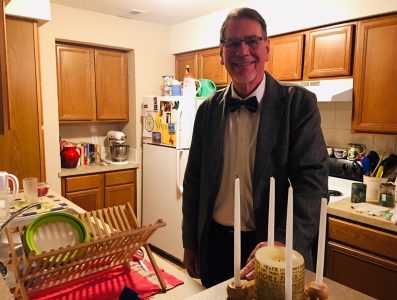 Three years after being prescribed medication for pre-diabetes, Kyle LaRosh, 69, of Tonganoxie, has maintained healthy blood levels, in part because he started an intermittent fasting regimen.

Three years ago, Kyle LaRosh received a wake-up call when his doctor started him on medication for prediabetes.

“I knew what that meant,” said LaRosh, of Tonganoxie. “My great-grandmother and grandmother, aunt, uncle and dad all died from complications of type 2 diabetes. I have a cousin without a foot and several other cousins who take medication and try to manage it. I knew it ended badly.”

His doctor also told him to drop the excess weight he was carrying. He began the medication and decided he would do what he could to avoid becoming part of his family’s problematic medical history.

“I know every diet works and every diet fails,” said LaRosh, a retired veterinarian. A diet would only be a temporary solution. He decided the only thing that would work was a lifestyle change.

It was his daughter who introduced him to intermittent fasting and “The Obesity Code,” a book by Dr. Jason Fung. He also discovered another of Fung’s books, “The Diabetes Code,” in which Fung suggests that type 2 diabetes is caused by insulin resistance, which can be reduced by intermittent fasting. The risk of diabetes can also be reduced by lowering your carbohydrate intake and eating more healthy fats like nuts, seeds, vegetables, fish and meat, the book says.

That’s a contrast to the typical American diet, LaRosh said.

The National Institute on Aging, part of the National Institutes of Health, reports that some people who have practiced extreme degrees of calorie restriction over many years have found markedly low levels of risk factors for cardiovascular disease and diabetes.

Other research, supported by the NIA, has focused on the effects of intermittent fasting and how the body uses up glucose and glycogen, and then turns to energy reserves stored in fat. This stored energy is released in the form of ketones, chemicals that help brain cells keep working at full capacity. Some researchers think that because ketones are more efficient energy than glucose, they may protect against an age-related decline in the central nervous system that might cause dementia and other disorders.

LaRosh, 69, started slowly by skipping breakfast and not eating for about 15 hours from supper to lunch the next day.

“That was easy,” he said. So he tried going from supper to supper.

He stays hydrated throughout the day by drinking lots of water, green tea and coffee. He also makes sure he gets exercise and a good night’s sleep.

Now, three years later, he’s at the point that he has one meal a day six times a week. Sunday is his day to eat three meals, and it begins with doughnuts.

He also adjusts his fasting to special celebrations and holidays.

“You eat cake, and the next day you fast,” LaRosh said.

A year later, when he went back to his doctor for his annual checkup, his blood test results had improved. He was taken off the prediabetes medicine.

“Everything looked better,” he said. His annual blood results continue to show no evidence of prediabetes.

That’s enough proof for LaRosh that intermittent fasting works for him.