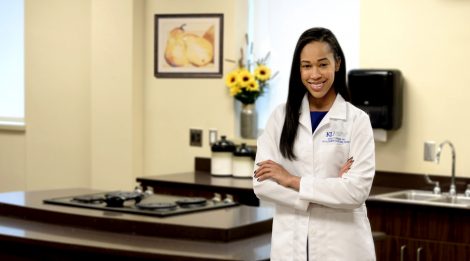 Ashley Shaw facilitates Aging with Grace and leads outreach and recruitment at the University of Kansas Alzheimer's Disease Center in Fairway.

Currently, 5.8 million Americans are living with Alzheimer’s disease; however, the disease is more prevalent among African Americans, according to the Alzheimer’s Association.

Because of that discrepancy, the University of Kansas Alzheimer’s Disease Center has launched an outreach project aimed at the African American community.

According to the Alzheimer’s Association 2017 Alzheimer’s Disease Facts and Figures, for all adults 65 and older, African Americans are about twice as likely to have Alzheimer’s or other dementias as older whites and Hispanics.

“It is the fourth-leading cause of death among African Americans,” said Ashley Shaw, a postdoctoral fellow at the KU ADC. Shaw facilitates Aging with Grace and leads the center’s outreach and recruitment.

Aging with Grace is a free interactive educational program tailored to the African American community, providing useful resources to reduce the risk of developing Alzheimer’s.

“We are disproportionately impacted by the disease,” Shaw said. “As far as research, we have low participation among African Americans, which makes it difficult in the long run to understand how the disease manifests, how best to prevent it and how to best treat it, if we’re not part of this process.”

While Shaw brings a background in nursing, nutrition, exercise and public health to the program, she also has a family history of Alzheimer’s. Her grandfather was diagnosed when he was in his mid-60s.

“This was early 2004, and there wasn’t a lot of understanding of the disease and help for the African American community,” she said.

However, there is now, and she is working to make people more aware. For the past year, Shaw has been leading Aging with Grace, which was originally developed in 2016. The focus has been on presenting programs with groups of people 65 and older, usually at local churches.

“Prior to leading the Aging with Grace program, I worked to revise the materials to make it more culturally relevant to the African American community,” Shaw said. “I added scriptures, and during the interactive presentation, we discussed how those scriptures were related to health behaviors such as diet and exercise. This gave participants an opportunity to reflect on the scriptures as it relates to their health practices moving forward.”

The program lasts about 90 minutes, with Shaw focusing on social engagement, nutrition, exercise and research opportunities at the KU ADC.

“Prevention is the biggest piece,” Shaw said. “I have tried to make the program interactive and reflect on how it is relative in their life.”

She walks them through the MIND diet which is a combination of the Mediterranean and DASH diets. It includes foods shown through research to support good brain health and cardiovascular health. She also offers participants a copy of the “Soul Food Makeover — Heart Healthy African American Recipes,” a free resource available online from the National Institutes of Health. The recipes include healthy soul foods that still have flavor.

“The diet focuses on leafy green vegetables and the number of servings, and healthy fats,” Shaw said. But it also allows flexibility. Participants get one cheat day each week.

“So they don’t need to worry about losing their culture,” she said.

While there currently is no cure for Alzheimer’s, Shaw said the center was looking at ways to reduce the progression of the disease.

“That comes from diet, exercise and social engagement,” she said.

For more information about Aging with Grace and clinical research trials, call 913-588-0555, ext. 1, or go to http://www.kualzheimer.org/about-the-ku-adc.html