In Lawrence, flu season is hitting earlier than it did last year; experts emphasize prevention 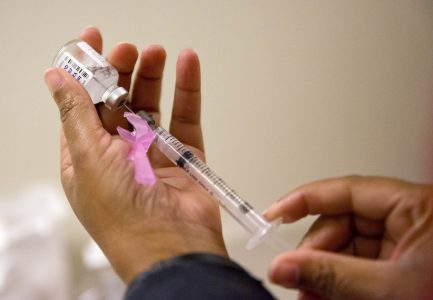 In this Feb. 7, 2018 file photo, a nurse prepares a flu shot at the Salvation Army in Atlanta. (AP Photo/David Goldman)

Flu season won’t peak until early next year; however, coughs, aches and fevers are currently on the rise, according to the Lawrence-Douglas County Health Department.

In recent days, there has been an uptick in the number of Douglas County residents who have gone to an emergency department in Kansas with flu-like symptoms, according to Sonia Jordan, director of informatics with the health department. On Nov. 29, the number of visits was up 2.5% compared with the same date last year.

“We are beginning to see trends,” Jordan said. “Just now we are showing a spike in the flu.”

Although the number is higher than last year at this time, it’s still relatively low compared with February, when 10% of the emergency department visits were for flu-like symptoms.

The fact that numbers have risen in the past few weeks doesn’t suggest this will be a rough flu season, said Linda Craig, director of clinic services with the health department. 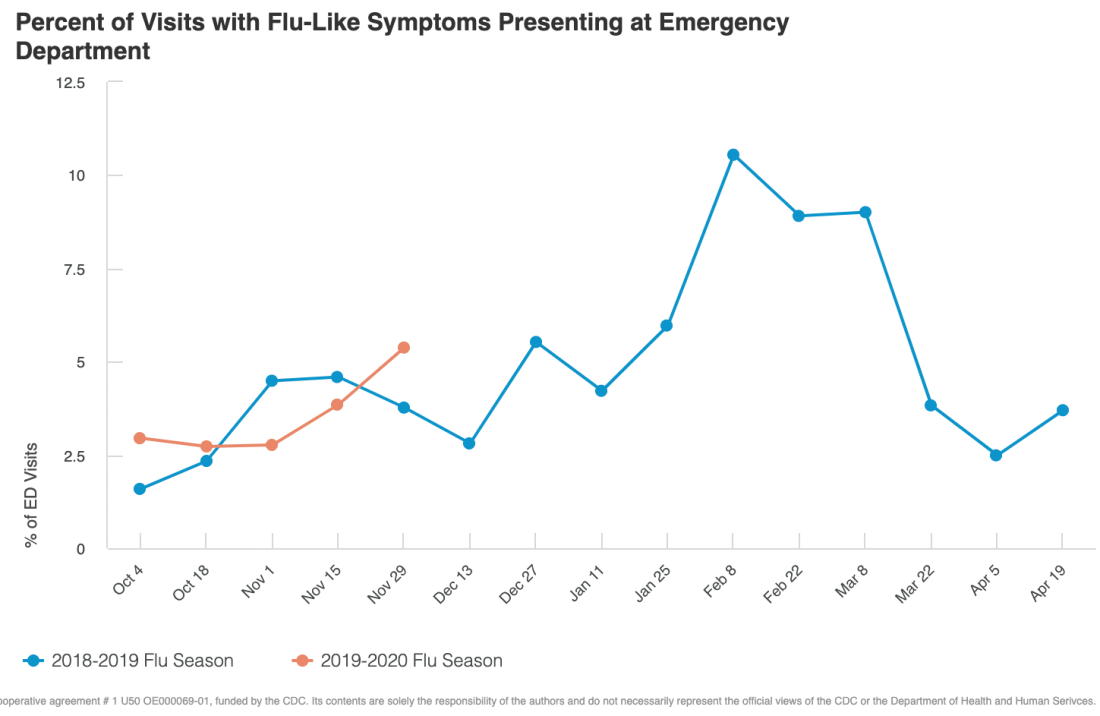 The above graph, provided by the Lawrence-Douglas County Health Department, compares the percentage of Douglas County residents with flu-like symptoms coming into an emergency department in Kansas in the 2018-2019 flu season and 2019-2020 flu season.

“Typically we will see peaks in January, February and March,” Craig said, “but it’s too early to know what the trend will be.”

The Associated Press reports that an early barrage of illness in the South has begun to spread more broadly, and there’s a decent chance flu season could peak much earlier than normal. The CDC on Friday estimated that there have already been 1.7 million flu illnesses, 16,000 hospitalizations and 900 flu-related deaths nationally.

It’s too soon to pinpoint if this year’s flu will be Influenza A, B or another strain, Craig said. Both A and B bring coughing, aching and fever.

Although it’s too early to know the severity and type of flu, both Jordan and Craig said it wasn’t too early to take preventive measures.

“It’s better to be proactive than reactive,” Craig said.

It might seem like the simplest action, but washing hands with soap and water should be a priority. It’s also important to cough into your upper arm or clothing, so as not to spread the droplets containing germs, Craig said.

Also, a flu shot is paramount. The CDC recommends everyone 6 months and older get the annual vaccination, with rare exceptions.

Something else to help stop the spread of flu is to stay home when sick.

“The Centers for Disease Control has changed its recommendations and is asking that people who are showing signs and symptoms with a fever of 100 degrees or greater and a positive flu test stay home for five days,” Craig said. “Anyone who has a fever is encouraged to stay home 24 hours after being fever-free without using Tylenol or Advil as a fever reducer.

“A fever is indicative of your ability to affect others,” Craig said.

The hope is that employers are better educated on the effect of the flu on work environments. If a sick employee comes in, they will be repeating the cycle with more employees. It’s better to let a handful stay home rather than perpetuating exposure, Craig said.