For school shooting survivors, trauma has no time limit 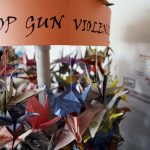 In this March 23, 2019 photo, origami cranes, a symbol of peace, hang in the Columbine High School library in Littleton, Colo., near where several survivors and family members of the victims gathered to speak about the upcoming 20th anniversary of the April 20, 1999, shooting. In the two decades since the Columbine High School massacre, therapists still struggle with how to help people cope. (AP Photo/Thomas Peipert, File)

PARKLAND, Fla. — Alex Rozenblat can still hear the cries of a wounded boy calling for help as she hid from the gunfire that killed 17 people at Marjory Stoneman Douglas High School last year.

Talking to therapists at the school in Parkland, Fla., didn’t help. Each session had a different counselor, and she found herself rehashing traumas she had already expressed. She would rather turn to her friends, who understand what she went through.

“There is slight pressure to get better as quickly as you can, and since it’s been a year, everyone thinks that you are better,” the 16-year-old said.

The mental health resources after a school shooting range from therapy dogs and grief counselors at school to support groups, art therapy and in-home counseling. But there is no blueprint for dealing with the trauma because each tragedy, survivor and community is different. Many survivors don’t get counseling right away — sometimes waiting years — making it difficult to understand the full impact.

The struggle is getting them to seek help in the first place. In the two decades since the Columbine High School massacre, a network of survivors has emerged, reaching out to the newest victims to offer support that many say they prefer to traditional therapy.

As the anguish festers, the danger grows, illustrated by the recent suicides of two Marjory Stoneman Douglas survivors and a father whose young child died in the shooting at Sandy Hook Elementary in Newtown, Conn.

Grief, troubling memories and emotions can bubble up at any time for survivors and even community members who didn’t see the bullets fly, she said. They can hit on anniversaries of the tragedy, birthdays of victims, graduations and new mass shootings, Gurwitch said. The trauma can even rush back with a song, favorite meal, video game or fire alarms.

“There’s never a time limit. We don’t get ‘over it.’ We hope we learn to get through it and cope,” Gurwitch said.

Survivors of the Columbine attack, which killed 12 Colorado students and a teacher on April 20, 1999, started The Rebels Project, which is part of a loose nationwide network of survivors of mass attacks.

The groups reach out after each shooting. They held a packed meeting for survivors and parents in Parkland this month, describing how they have learned to cope over the years through therapy, exercise and hobbies and assuring the Florida community that their pain is normal.

“We are one family,” said meeting organizer Mike Dempsey, a survivor of 9/11 and the 2017 Las Vegas mass shooting. “What helped me after 9/11 was that Oklahoma City bombing survivors drove all the way up to New York to help us. They weren’t mental health professionals, but they were able to offer comfort and outreach and just to let us know: ‘We’ve been through this.'”

Rozenblat refuses to talk about the Parkland shooting. If she feels anxious during the school day, she holes up in a TV production classroom because there are no windows for a gunman to shoot through.

Her mother worries. Alex had been an honors student but now struggles with schoolwork. She’s also started hanging around a new group of friends, said her mother, Lissette Rozenblat.

She schedules therapy appointments, but Alex often makes excuses to postpone or cancel. The family bought a therapy dog and is trying to get Alex into art therapy.

“The common theme among parents … almost all of our kids don’t want to talk about the incident,” Lissette Rozenblat said.

Some students who were not physically wounded minimize their trauma and don’t seek help because they try to convince themselves they were lucky, said Columbine survivor Heather Martin, who co-founded The Rebel Project.

“You can’t measure trauma in that way,” Martin said. Still, she said people need to seek help when they feel ready, not when others think they should.

Victims often receive compensation for longer-term care, but many in recovering communities, especially those may have seen horror but avoided injury, say there’s still not enough help to go around.

“These kids have seen as much as soldiers who have been in battle. They survived gunfire. They walked over bodies. They had classmates who were right next to them who got shot,” Krawczyk said.

Teachers also are dealing with their own trauma and insecurities, she said.

“We don’t all have our marbles back in our bags yet, but we are in charge of those children. That gravity is a lot of responsibility, and for some teachers, it is too emotionally overwhelming,” Krawczyk said.

Managing long-term mental health effects poses unique challenges in each town touched by tragedy, but experts agree that isolation is a red flag and keeping victims connected to family, friends and community is critical.

Dr. April Foreman, a psychologist on the board of the American Association of Suicidology, called treating mass shootings “a profound lifetime health care issue” but stressed that a majority of those who have suicidal thoughts recover.

Stoneman Douglas sophomore Julia Brighton said she’s attempted suicide four times in the year since she watched the gunman shoot through the window of her English class, killing three friends. Despite an outpouring of community support and a bevy of mental health services, Brighton said she still felt ashamed to seek help.

After months of therapy, she said she realized “there’s nothing to be afraid of because it made me a better person in the long run.”