Programs for those with Parkinson’s are growing rapidly in Lawrence 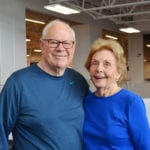 Wayne and Donna Osness have been instrumental in Lawrence Memorial Hospital's development of regular exercise classes for people with Parkinson’s disease. Wayne, who has Parkinson’s, is a professor emeritus for the KU health, sport and exercise science department.

Parkinson’s is a disease that affects the part of your brain involved with movement.

Initial symptoms affect motor skills and can result in tremors, stiffness and slowness of movement. Gradually, it can progress to nonmotor symptoms such as depression or anxiety. This disease progresses, but with exercise treatment, symptoms can be slowed. This is what the Parkinson’s program at LMH Health is tailored to do.

These Parkinson’s-specific exercise classes began almost two years ago. Now that the word is out about the impact it is making, the program is growing very quickly. The classes are reaching many community members, which is exactly what the program hoped to do.

“I love that LMH Health provides this amazing program to the community,” said Jaye Cole, senior director for physical therapy and rehab. “Having this program locally means our patients don’t need to drive to Kansas City or Topeka for great care. The program is doing things that can impact the quality of life for many people with Parkinson’s.”

About the Parkinson’s Classes

• There are two types of classes offered — one sitting and one standing.

• The sitting class is called Twist and Shout and is tailored for those using assistance devices because of balance challenges and weakness.

• The standing class is called Rhythm and Moves and focuses more on standing balance, strength and agility.

• The next session of classes begins June 3 and ends Aug. 1.

• People with Parkinson’s are welcome to join the classes at any time, even if they are not able to sign up for the whole session.

• For more information and to enroll online, visit lmh.org/parkinsons.

The movements and exercises in these classes are specific to each person with Parkinson’s. There is research that continues to confirm the effectiveness of exercises and the reduction of symptom progression. For some patients, an exercise class is not the best way to get them to move. The program hopes to offer a variety of classes for people who prefer other methods of exercise.

“We hope in the future to offer classes like painting, aquatics and dance,” Cole said. “This way there is something for everyone, even if they are not big into exercise.”

Cole said that the effort to grow and advance this program has been spearheaded by Suzie Craig, a physical therapist with LMH Health therapy services, as well as by Donna and Wayne Osness.

The Osnesses are longtime Lawrence residents who have a deep love for the city and its community members. Wayne was diagnosed with Parkinson’s a few years ago and has been taking the Parkinson’s classes ever since.

“I am getting calls from people who are moving to Lawrence, who have heard about the LMH Health Parkinson’s classes and are wanting to know how to join,” Donna said. “I know many people who have moved to the Lawrence area and are now attending. This program just keeps growing.”

As the program continues to grow and develop, there are plans to create classes based on ability level. Donna said that a goal is for the program to continue to grow, not by adding people to existing classes, but by creating more classes with fewer people in them for more individualized attention.

“The thing with Parkinson’s is that the symptoms vary so differently,” Wayne said. “For one person it may be speech and another mobility and another both. So it is important to have these classes structured in a way that is still a group setting, but is small enough for individualized attention.”

The classes are offered to anyone with Parkinson’s. Whether you’re sitting or standing, there is a class for you. These classes provide a space for Parkinson’s patients to work out, but it also gives them a group of people to befriend who are in a similar situation.

“I have many friends that I wouldn’t have if it were not for these classes,” Wayne said. “It is a joyful, fun and uplifting place to be. The support is great and the classes are just as much social as they are physical.”

“And I get to hang out with the caretakers, family members and spouses of those in the class,” Donna said. “People do not want to miss class. They are seeing the improvements and love the time they get to spend together and are bummed if they cannot attend. This winter, with how bad the weather was, people were upset when they couldn’t get out to attend the class.”

Wayne, a former exercise science professor at the University of Kansas, said the class has helped him tremendously, and his friends as well.

“There is no cure for Parkinson’s,” Wayne said. “Since the best thing to do is slow down the symptoms, these classes are our medicine. There are so many seeing improvement from these classes, myself included. They have stopped the symptoms of this disease from getting any worse.”

Donna and Wayne have worked side-by-side with Craig to grow the class and connect the Lawrence community with it. Craig said that the incidence of Parkinson’s is increasing, so the sooner people are introduced to these classes and can start attending, the better.

“If we can get people into these classes right when they are diagnosed, we can get them moving earlier,” Craig said. “This can help them set up healthy habits.”

Craig is certified in LSVT BIG and PWR! Moves, two certifications that better train the LMH Health therapists who work with people with Parkinson’s. With the program growing quickly, LMH Health therapy services has added Megan Jones, a physical therapist assistant, who works alongside Craig.

Right now, LMH Health has two levels of classes: a seated level and a standing level. Craig plans for these classes to grow in the near future.

“Ideally, we would like to grow these specific ability-level classes to three by this fall,” Craig said. “We plan to grow to four levels by 2020 with a possibility of one of those later in the day to reach out to those who are still working.”

Craig said Parkinson’s requires more than just medication. She strongly believes everyone needs to exercise, even if that means cleaning your house or going for a short walk. However, her patients typically need specific movements to be effective.

“We ‘prescribe’ people exercises and movements,” Craig said. “We give them ‘doses’ of activity because that is what will keep their condition from progressing.”

— Jessica Brewer is an intern in the Marketing and Communications Department at LMH Health, which is a major sponsor of the Lawrence Journal-World’s Health section.