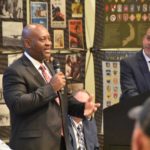 Lawrence veteran Mike Kelly was pleased to see many resources shared with those in attendance at a Veterans Affairs town hall Thursday at the Lied Center. However, he pointed out that he thought an important one was missing from the speakers’ presentations.

“They have a nurse triage line,” Kelly said. “These nurses can go through 20 questions and tell you, ‘You’re not going to die; come in tomorrow,’ or, ‘You’ve got a serious problem and you need to come in right away.'”

He once called when he had a sharp pain in his left arm. He said the nurse was concerned he might be having a heart attack, so she encouraged him to visit the ER. Tests later showed that his heart was fine and confirmed his initial suspicion that the pain was connected to a neurological condition — but better safe than sorry.

“If I had been having a heart attack, that would’ve saved my life,” he said, noting that afterward, he started physical therapy and his arm is feeling much better.

Through the roughly 90-minute town hall, several speakers shared resources for veterans, plus information about developments in the VA Eastern Kansas Health Care System. Here are some key takeaways.

Rudy Klopfer, director of the EKHCS, discussed in a bit more depth some plans for the Lawrence Community-Based Outpatient Clinic, 2200 Harvard Road.

According to previous Journal-World coverage, the clinic opened with about 500 patients in June 2006. In the time since, the needs have outgrown the clinic’s walls — it saw more than 1,200 individuals in the last 12 months — so plans are in the works to move to a larger building.

Klopfer said he’s not sure exactly where the larger clinic will be, but he said after the town hall that he hopes to know the location by the end of this year. He also said it will likely be up and running in fall 2019, whether that means completing construction of a new facility or renovating an existing building. 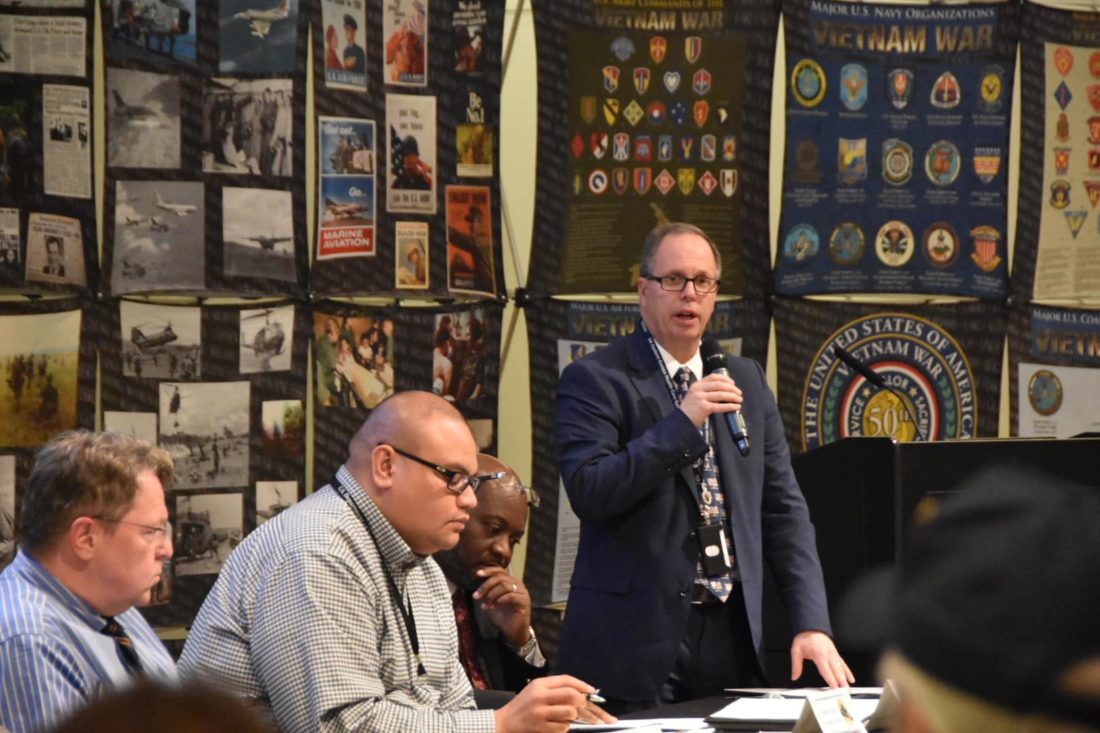 He said there is currently one team of providers, social workers and support staff at the Lawrence clinic; the hope is to expand that to two teams.

The clinic currently offers primary care, vaccinations, lab work, therapy and post-traumatic stress disorder groups, smoking cessation, nutrition education and more, Klopfer said, all of which he hopes to expand. He’d also like to bring in new mental health providers, and some possible added services could include physical therapy, chiropractic care and audiology.

“We see that this is an opportunity for us to be able to upgrade more services here so you don’t need to travel to a larger hospital,” Klopfer told the crowd of roughly 100.

When the new facility is ready, Klopfer said there might be a day or two that the current clinic could be shut down to move equipment and furniture.

“I always say emotions are like armpits — we just have them,” said Stephanie Davis, EKHCS suicide prevention coordinator, drawing a laugh from the crowd. “We don’t get a choice in this. If you’re a human being, you have emotions — and we need to be able to talk about mental health issues with this same level of confidence that we talk about physical health issues.”

Davis said 20 veterans lose their lives to suicide every day. She said there are two key signs to watch for in veterans that you think may be struggling with suicidal thoughts: thwarted belongingness — a feeling that they don’t have anyone to reach out to, and no one depends on them — combined with feeling burdensome and believing their loved ones would be better off without them.

“Veterans don’t want you to beat around the bush,” she said: Ask, straightforwardly, if someone is thinking about suicide.

“You may not understand exactly what’s led them here, but what you can say is, ‘I hear you, I see you,'” Davis said. “‘This is really scary, and you feel lost right now. I’m going to stay beside you and we’re going to figure out what’s next.'”

The Veterans Crisis Line is available 24/7 by calling 1-800-273-8255 and pressing 1. Davis said many of those who answer the line are veterans themselves, and they will talk to callers as long as needed and get them the help they need.

A third call center opened in Topeka in May to help handle call volume. Veterans can also text 838255 or chat online at veteranscrisisline.net.

Benefit requirements and availability have changed over the past several years, so those who have unsuccessfully sought benefits before are encouraged to try again. A point of contact at the Dwight D. Eisenhower VA Medical Center in Leavenworth can be reached at 913-682-2000, ext. 52361. There is also a toll-free number, 1-800-574-VETS (8387); press 4.

Many community-based services that previously had different eligibility criteria and were difficult to navigate have been consolidated for efficiency. Also, in some cases, the VA can preauthorize veterans to seek needed care from community providers. For more information about those services, call VA-EKHCS Community Care at 785-350-3111, ext. 54330.

Tim Hornik, a Lawrence veteran who lost his vision while serving in Iraq, spoke about service dogs and emotional support animals, noting stark differences between the two. 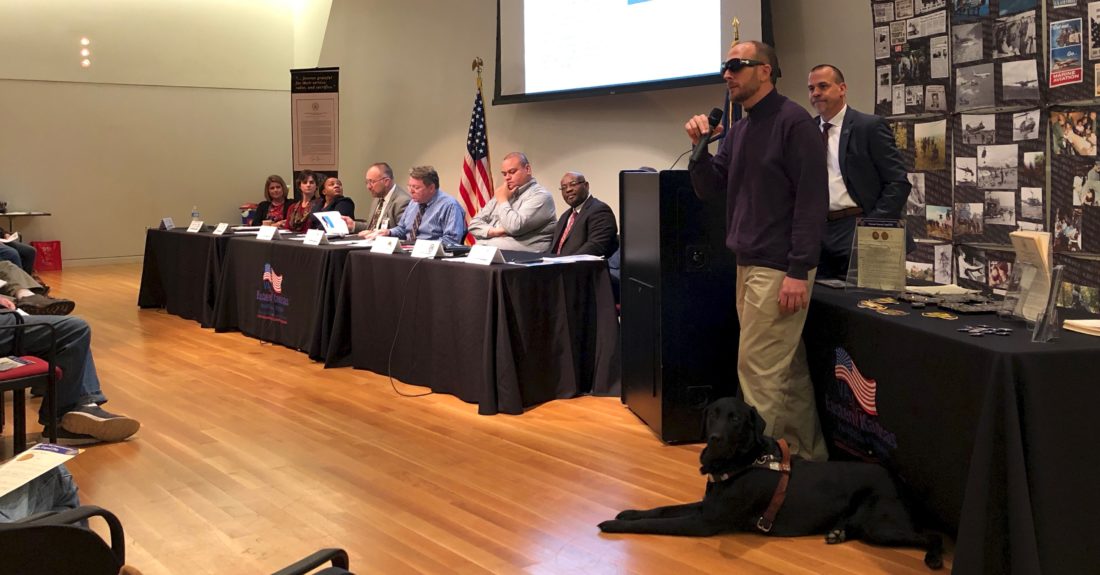 Tim Hornik, a Lawrence veteran who lost his vision while serving in Iraq, speaks about service dogs and emotional support animals as his guide dog, Barney, looks on at a Veterans Affairs Eastern Kansas Health Care System town hall on Thursday, Nov. 15, 2018 at the Lied Center Pavilion. Standing behind Hornik is Joseph Burks, public affairs officer for VAEHCKS.

Service dogs — such as his guide dog, Barney — are trained to complete tasks to “ameliorate a barrier” imposed by their owners’ disabilities or health conditions. Emotional support animals, prescribed by mental health professionals, are intended to comfort their owners with their mere presence. They don’t have the same rights to public access.

He said policy doesn’t allow emotional support animals on Veterans Health Administration property, and he noted an incident in which a dog was running around unleashed, barking at people.

“That’s not how us veterans should be treating one another,” Hornik said.

Andrew Freeman, supervisory veteran service representative from the regional office in Wichita, said a VA backlog of appeals of denied claims has been worked down from more than 300,000 to 85,000 in the past few years.

Freeman said that in the past, some appeals have dragged on for three to seven years because new evidence could be introduced throughout the process. Since a test run of the Rapid Appeals Modernization Program, or RAMP, began last November, that’s starting to change.

“With this new program, our goal is to complete cases within 125 days,” he said.

The law that created RAMP doesn’t go into effect until February, but the early run has invited certain veterans with the oldest claims to choose a “lane” to speed up the decision process through the new program.

“It actually brought the decision-making level back down a notch to our senior-level reviews — seasoned raters that are able to apply the law and give these answers,” Freeman said.

They ‘try their hearts out’

Veteran Chris Caldwell, of Lawrence, said as the town hall was wrapping up that he wanted to share ‘nothing but praise’ for the team at the local clinic, and his eyes glistened a bit as he recalled his first experience with the VA.

“The day I walked into the VA to sign up for medical benefits, I had a minor medical emergency,” Caldwell said. “I went into the hospital in Topeka, and they said one thing to me. They said, ‘We will take care of you.'”

“… The people from the VA really, I think, try their hearts out.”