Healthy Outlook: I had my brain waves balanced; here’s what happened 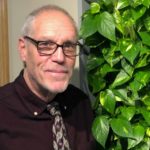 Lawrence psychotherapist Ed Bloch is used to losing clients after just a few sessions — but that’s OK with him.

It’s just the nature of Cereset, the new brain wave balancing technology he offers out of his new office at 5040 Bob Billings Parkway, Suite A1, near the western edge of Lawrence. Five sessions is often all it takes before his clients no longer need to return. (There is a bit of homework, but we’ll get to that.)

Unbalanced brain waves can lead to anxiety, trouble focusing, restlessness and difficulty sleeping, according to information provided by the Scottsdale, Ariz.-based creator of Cereset. The name of the technology comes from the words cerebrum — brain — and reset.

One of the most common reasons clients seek out the treatment is to help achieve more restful sleep. The makers tout that balancing one’s brain can help relieve “stuck” stress, enhance learning and memory, overcome worrying and anxiety and achieve peak performance.

I got the opportunity to try it for myself on Friday. Here’s how it went.

I didn’t know what to expect in the free sample session, or how it might feel. In reality, it feels like relaxing in a dim room in a big, cozy recliner. There was no unusual physical sensation at all — I could’ve taken a nap.

Bloch attached a few small sensors to my head and earlobes, then tried to get a baseline reading of my brain waves on his computer. My devices (iPhone in pocket, Fitbit on wrist) caused a bit of interference, but the system worked quickly once those were out of the way.

Then Bloch handed me a pair of earbuds and explained that I’d hear some tones for about two minutes; then a short break, then two more minutes of tones. Altogether, this process took about 10 minutes.

The sound was as if a pianist was following along with sheet music but only playing a few of the notes. It wasn’t entirely random, but there was no real melody, chords or rhythm.

I did not realize that I was hearing my own brain waves. 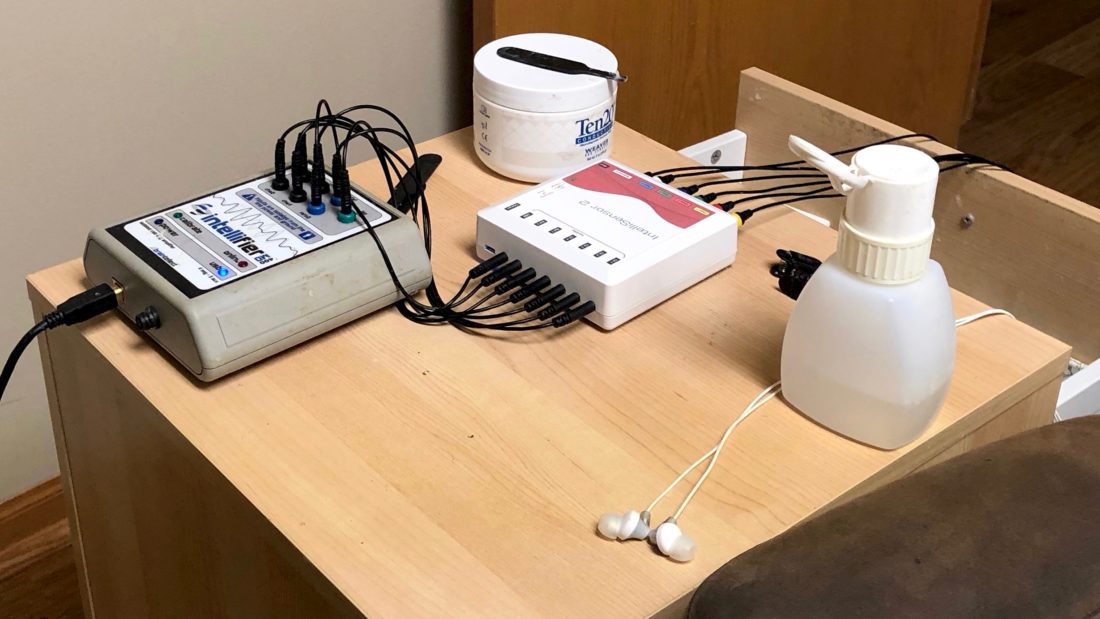 Brain wave balancing technology is shown on Friday, Nov. 30, 2018 at Cereset Lawrence, 5040 Bob Billings Parkway, Suite A1. The boxes link to sensors, which psychotherapist Ed Bloch applies to clients’ heads using water-soluble glue. Clients then hear exact replicas of their own brain waves through the earbuds.

Bloch explained: “With your brain wave, we create a musical note in a subsecond that is the exact amplitude and frequency of that brain wave.”

He offered an analogy.

“If you had all this extra activity going on that the technology doesn’t want you to repeat, we only play back what we want the brain to play back and start developing as a pattern,” he said. “So we just leave out the static, kind of like fine-tuning the old radio.”

In effect, the technology is not trying to reprogram your brain; rather, it’s reflecting back a tidier version.

“All the brain is seeing is itself in the mirror, and what we do is we put a little lipstick on and show it what it will look like when it’s all pretty,” he said with a smile. “It likes what it sees and then starts moving in that direction.”

Bloch explained in detail how the brain’s frontal pole regulates our emotions and the temporal lobes are our reactivity center — the right side controls our “fight-or-flight” response, and the left controls our “rest and digest” or “freeze” reactions. Cereset helps to balance brain waves in both areas, thereby helping relieve stress, anxiety, sleep disturbances and more.

My baseline charts showed some imbalances in both areas. However, after just the brief test session, the most extreme points on the graph had come closer to the center, indicating they were balancing out.

These graphs show the baseline, at left, and post-session readings of Journal-World health reporter Mackenzie Clark’s temporal lobe brain wave balance. This particular reading showed the most dramatic of balance shifts that occurred in a free, four-minute session at Cereset Lawrence, 5040 Bob Billings Parkway, Suite A1, on Friday, Nov. 30, 2018. The horizontal line across the middle of the charts represents ideal balance. “Over-activated high frequency energy in the Temporal Lobe is often indicative of sleep disruptions,” Lawrence psychotherapist Ed Bloch wrote in his annotations on the graph.

Bloch said my results were closer to what he would expect to see after someone’s first full 45-minute session.

“To see that happen in such a short period is really nice,” Bloch said. “It tells you that your brain has a lot of flexibility to it, a lot of plasticity. So it would be very willing to do that work.”

According to Cereset’s website, Bloch’s center is one of just six that have opened in the United States; several more are coming soon, but the next closest will be in Fayetteville, Ark.

Bloch experienced firsthand the previous generation of this same technology, called Brain State, in 2008. The sessions then were much more time-consuming than current technology — about two hours twice a day for several days. By lunchtime on the third day, he noticed a change.

“I looked at the trees, and I said, ‘I don’t think I’ve ever seen green like that in my life,'” he said. “… I knew right then and there, something was uniquely different.”

He also noted that his ability to focus, in particular, was greatly enhanced.

He was still doing talk therapy at that point, but he knew this was something he wanted to offer his patients. So he got trained as a technician, and since then he has treated hundreds of people in town with Brain State at his previous practice, the Life Enrichment Center.

With Cereset, the first four sessions last 45 minutes to an hour, over four consecutive days. Then clients take home what’s basically a mobile version of the in-office technology. It’s a sensor-equipped headband that attaches to a tablet device — this is the homework I mentioned — to use for about 10 minutes once or twice a day. Then clients return for an integration session 21 days after the last office visit. Like a retainer for braces, they can then use the headband for the rest of their lives as they see fit. 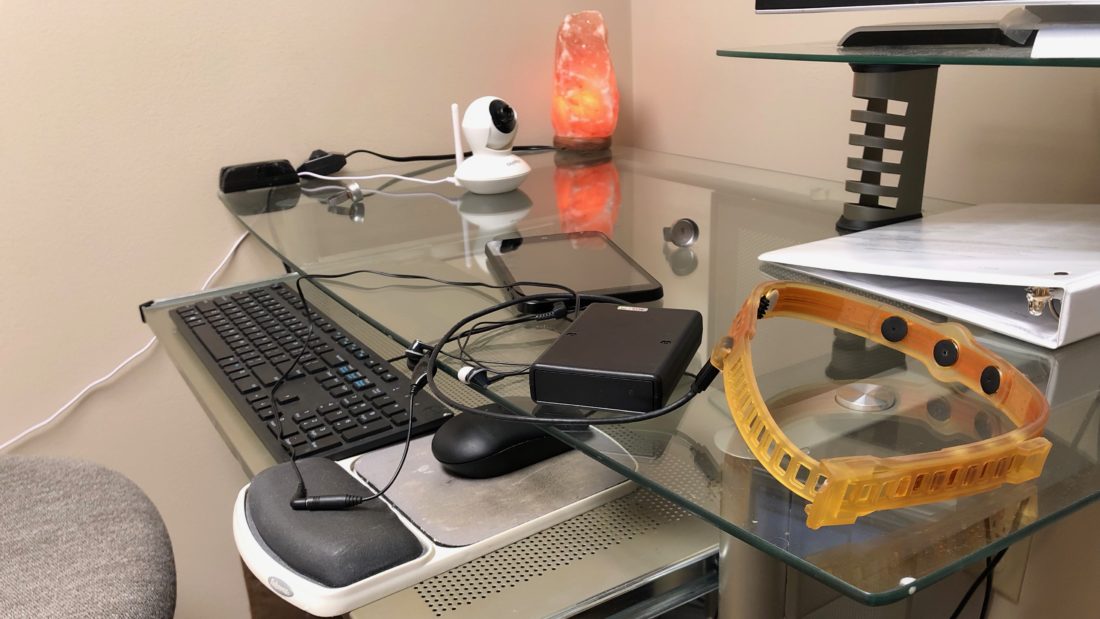 A sensor-equipped Cereset headband and its connected devices, which clients take home to maintain their brain wave balance, are shown on Friday, Nov. 30, 2018 at Cereset Lawrence, 5040 Bob Billings Parkway, Suite A1.

Bloch estimated that about 90 percent of his clients have seen improvements in sleep. Among those he’s helped are clients who have post-traumatic stress disorder, treatment-resistant depression, anxiety, eating disorders and athletes who have suffered concussions.

For many, those five sessions are all they need in Bloch’s office; others might opt to return if they feel it’s best for them. Bloch said, for example, some patients who have deeply entrenched trauma-based patterns might return for chair sessions as needed.

As a talk therapist, Bloch said, he’d work with many of his clients for years. He wanted to shift his focus because he said he worried that his clients weren’t getting deep, long-lasting results.

“I was very tired of having such an active role in the outcome of somebody’s mental health,” he said. “I didn’t feel like that was a good place for me to be, or anybody to be … because who am I, right, to tell anybody what their mental health should look like?” 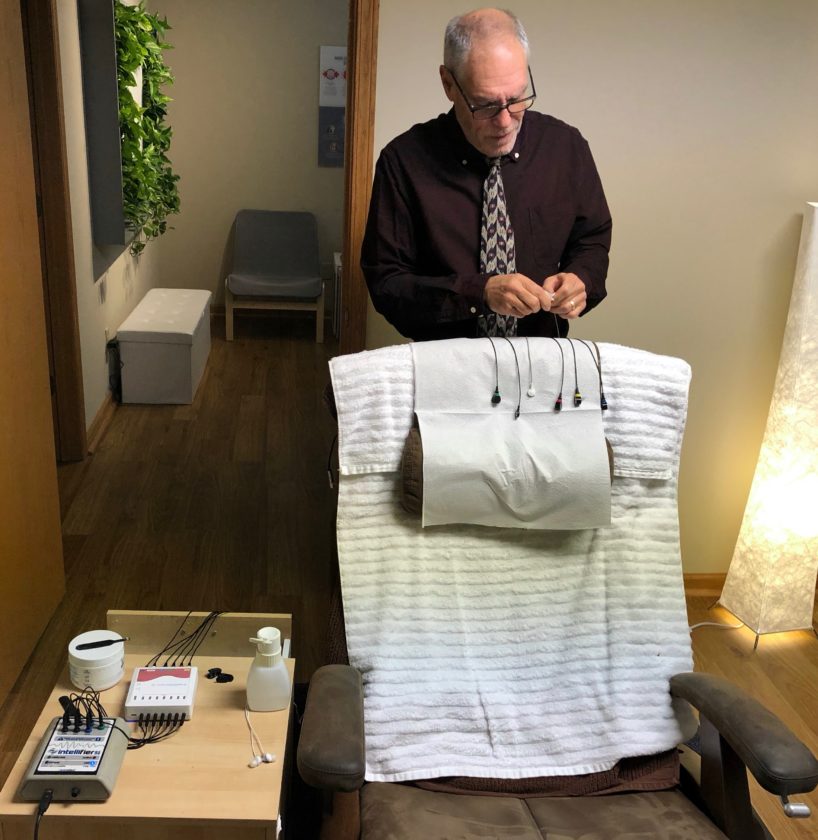 Providing Cereset, Bloch joked that he’s a potted plant: “The actual process that’s going on between the brain and the technology — I’m not involved.” He said it’s not just intervening to fix symptoms; it’s addressing the problems at their roots, and he’s glad to see it help people quickly.

“The only thing I don’t like is not knowing that they’re doing well,” he said.

Because my results were so dramatic after just the short test drive of Cereset, I don’t feel as though I’m jumping the gun in sharing what I experienced.

I felt surprisingly more optimistic, rational and calm after the short session, despite a challenging afternoon.

In the evening, I felt ready to go to bed — not because I was exhausted, but rather my body felt ready to recharge. Saturday morning, my Fitbit data didn’t show much of a difference in the amount of deep sleep I got, but I did wake up feeling more rested than I had in days. I was ready to be awake when my alarm went off.

To learn more, email Bloch and Cereset Lawrence at info@lawrence.cereset.com or call 785-218-3965.

Read more and check out scientific studies on the technology on the company’s website, cereset.com. 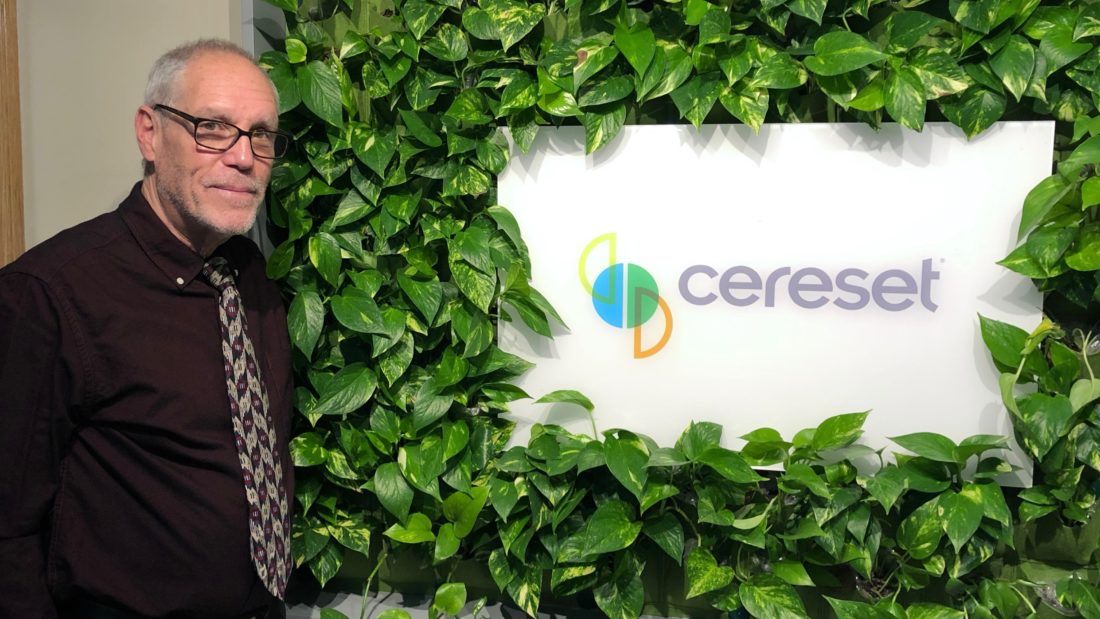