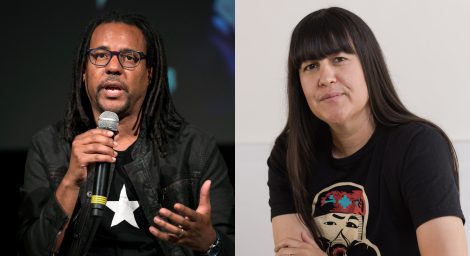 Nationally acclaimed authors Colson Whitehead and Natalie Diaz will headline the Paper Plains Literary Festival, a free community event that will be hosted at locations throughout Lawrence April 23-26, 2020.

Festival director Danny Caine announced some of the authors during a Paper Plains launch party on Wednesday. The featured authors represent a variety of genres, including fiction, poetry and young adult.

Whitehead is the author of “The Nickel Boys” and “The Underground Railroad,” for which he won the 2016 National Book Award for Fiction and the Pulitzer Prize for Fiction in 2017. His presentation is sponsored by the Lawrence Public Library’s Ross & Marianna Beach Foundation, The Commons and the Hall Center for the Humanities.

Diaz, a Mojave American poet, will be discussing her March 2020 book “Postcolonial Love Poem.” Her presentation will be sponsored by the Hall Center for the Humanities.

Since the committee began planning the event, Caine said, the goal has been to make the festival free. To accomplish that, it has become a collaborative project spearheaded by the Raven Book Store, Lawrence Public Library, the Hall Center for the Humanities, The Commons, the Watkins Museum of History, the Spencer Museum of Art, Haskell Indian Nations University, Unmistakably Lawrence, the Lawrence Arts Center and the City of Lawrence.