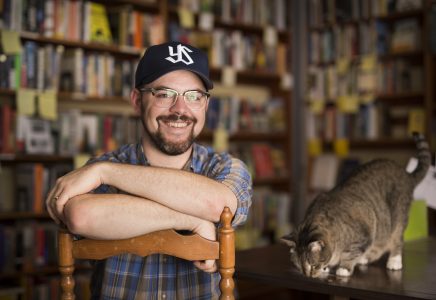 Danny Caine, owner of the Raven Book Store, has been named Midwest Bookseller of the Year by the Midwest Independent Booksellers Association. He is pictured in a file photo from July 2017.

Danny Caine, owner of the Raven Book Store, has been named Midwest Bookseller of the Year by the Midwest Independent Booksellers Association.

Caine was selected because of his extraordinary impact on his community, according to a news release from the association.

“When a store gets it right, they find their voice and become a beacon for booksellers, publishers, authors, and readers locally and nationally. With Danny Caine as its owner, the Raven has found its voice and is using it to strengthen independent bookselling,” the release stated.

While working on his graduate studies at the University of Kansas, Caine began working part time at the Raven. Three months after graduating in May 2017, he was able to buy the bookstore, at 6 E. Seventh St.

“I’m so, so honored to be recognized like this by the supportive and wonderful Midwestern bookselling community. It’s a thrill to be recognized for all the hard work we at the Raven are doing and have been doing for the past 30 years,” Caine said in an email to the Journal-World. “We know Lawrence is just as creative and interesting as any other place, and awards like this will help everyone else see that too.”

Caine keeps the pulse of the local literary scene and regularly hosts readings at the Raven. He works closely on community projects with KU, the Lawrence Public Library and Watkins Museum of History, bringing popular writers to town.

In addition to selling books, Caine is also a published author. A collection of his poetry, “Continental Breakfast,” was released earlier this year.

From the small independent bookstore, Caine’s voice was far-reaching earlier this year when the Raven took to Twitter after a customer complained about books costing more in the store than online.

Caine composed a series of educational Tweets describing the real cost of selling books and cheerfully engaged with the many comments on the thread. As of today, it has been showcased in the Chicago Tribune, retweeted nearly 21,000 times and has garnered 52,000 likes, according to the news release.