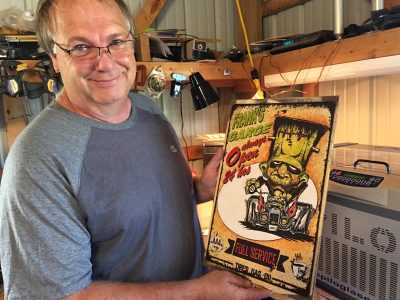 Guy Young holds one of his creations that he'll be selling at Sunday's 40th Annual Fall Arts & Crafts Festival in South Park.

Exhibitors are down to the wire creating items to sell at this weekend’s 40th Annual Fall Arts & Crafts Festival.

On Tuesday, Christy Minton was putting the finishing touches on the multimaterial collages she fashions in her downtown Lawrence apartment.

In North Lawrence, Guy Young was working up a sweat inside his shop, completing his laser-engraved plaques with well-known cartoon characters and various messages.

Both artists will be first-time exhibitors at the festival, scheduled for 10 a.m. to 5 p.m. Sunday in South Park.

The festival, hosted by Lawrence’s Parks and Recreation Department, is expecting 150 exhibitors from across the Midwest, said Duane Peterson, the special events supervisor.

Free arts and crafts activities will be available for children. Live bands will begin playing at noon, including Beer Bellies, Kim and the Quake, Vaughn Cowden and Spirit Dancer. Food trucks will be on hand, and Free State beverages will be available in a beer garden.

Minton, the collage maker, is relatively new to Lawrence, having moved to town in 2018 from north of San Francisco after retiring from the health industry. She didn’t start creating art until she turned 50. Her colorful collages include materials like fabric, paper, bits of sewing remnants and tacks. 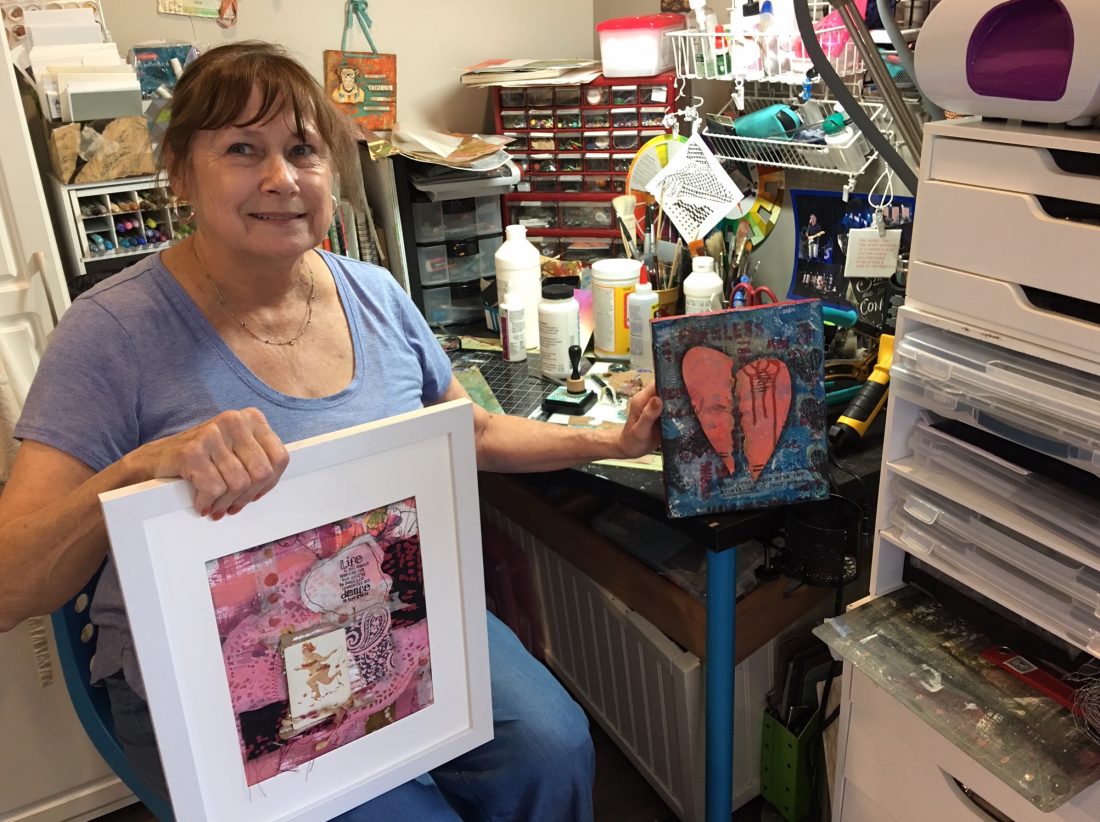 Christy Minton holds pieces of her mixed media art, which she will be selling at Sunday’s 40th Annual Fall Arts & Crafts Festival in South Park.

“This really started with scrapbooking. Then I began to discover more of what can be done with paper and cardboard and old books and magazines,” she said.

After retiring, she felt a pull toward Lawrence because of its vibrant arts community and also to be close to relatives.

“I thought, this is where I should be, and my art has taken off,” Minton said.

Young is also retired and has turned his experiences working with laser engravers in the manufacturing field and his love for cartoons into a creative outlet. He designs and paints characters from popular culture, such as Batman, Daffy Duck and the Cat in the Hat, then he engraves messages onto the wooden plaques with a laser. The smaller plaques have bottle openers attached, and all are ready to hang on a wall.

Both artists said their items at the festival would be priced in the $25 to $30 range.

Other items for sale at the festival, Peterson said, will include paintings, photography, wood furniture, leather crafts, pottery, silversmithing, quilts, baskets and more.