Holiday Happenings 2019: Baldwin City to greet the holiday season with Festival of Lights 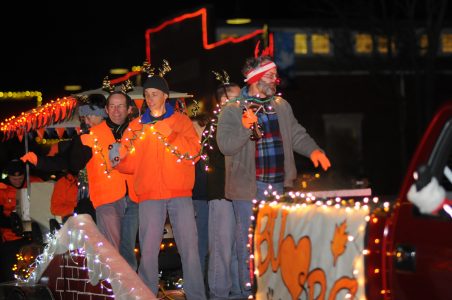 Baker University students and staff greet the crowd during a recent Festival of Lights Parade in downtown Baldwin City on a float adorned with strings of holiday lights. This year's parade will be at 6 p.m. Dec 7.

The annual Festival of Lights Parade will be the highlight of a full day of activities Dec. 7 as Baldwin City greets the holiday season.

Baldwin City Chamber of Commerce executive director Jeannette Blackmar said the parade will once again begin at 6 p.m. The parade route will start on Eighth Street along the west side of the Baker University campus and then turn east on High Street. As always, she said, participants in the parade are encouraged to decorate floats, vehicles, bicycles or themselves with strings of lights.

The Christmas tree lighting and pictures with Santa Claus will follow the parade at 6:30 p.m. at Baldwin City Hall, 803 Eighth St., and a fireworks show is planned to start at the same time.

Festivities will get started even earlier in the day with a variety of holiday markets and sales, and Santa will be making an appearance for breakfast. Here’s the complete schedule: