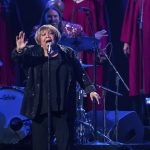 Mavis Staples performs "I'll Take You There" at the 52nd annual CMA Awards at Bridgestone Arena on Wednesday, Nov. 14, 2018, in Nashville, Tenn. (Photo by Charles Sykes/Invision/AP)

Celebrated R&B and gospel singer Mavis Staples is once again set to visit Lawrence to share stories from her life and career.

Staples will appear Aug. 21 at Liberty Hall, 644 Massachusetts St., as part of the Lawrence Public Library’s 780s Series, the library announced Wednesday in a news release. Staples had originally been scheduled to visit Lawrence in April 2018 but had to cancel days before because of the death of her sister, Yvonne.

The evening will feature Staples in conversation with University of Kansas professor Randal Maurice Jelks, discussing her hall-of-fame career and her experiences during the civil rights era, according to the release. Staples will not be performing music or signing merchandise during the event, the library said.

The event will be free and open to the public, with no tickets required. Doors will open at 6 p.m. and the talk will begin at 7 p.m.

The library’s annual 780s Series, named for the Dewey Decimal range for music, brings prominent musicians to Lawrence to tell the stories that influenced their music, according to the release. The series is supported by a donation from the Harrison Family Fund of the Douglas County Community Foundation, in partnership with the Lawrence Public Library Foundation. Previous 780s Series speakers included Booker T. Jones, Kim Gordon and Jimmy Webb.