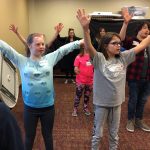 Kelsey King left and Eleanor Roust, right, learn the movements for “ A Friend Like Me," a song in Disney's "Aladdin Jr." during the first rehearsal at Theatre Lawrence on March 6, 2019.

It was the first night of rehearsal, and Kelsey King, 15, was excited to be acting in an upcoming production of Disney’s “Aladdin Jr.” at Theatre Lawrence.

Standing beside her was Eleanor Roust, 11, who was just as excited to be a mentor.

On Wednesday night, Kelsey, who attends Free State High School, was paired with Eleanor, who goes to West Middle School.

After successfully going through some dance steps to one of the production’s songs, “Friend Like Me,” Kelsey and Eleanor high-fived each other.

Then Kelsey jubilantly hugged her mentor.

They seemed a perfect match in this special production where the artists are young people with disabilities. The mentors, who do not have disabilities, will stay with the artists through the production, helping them learn the lines and dance steps and encouraging them every step of the way. 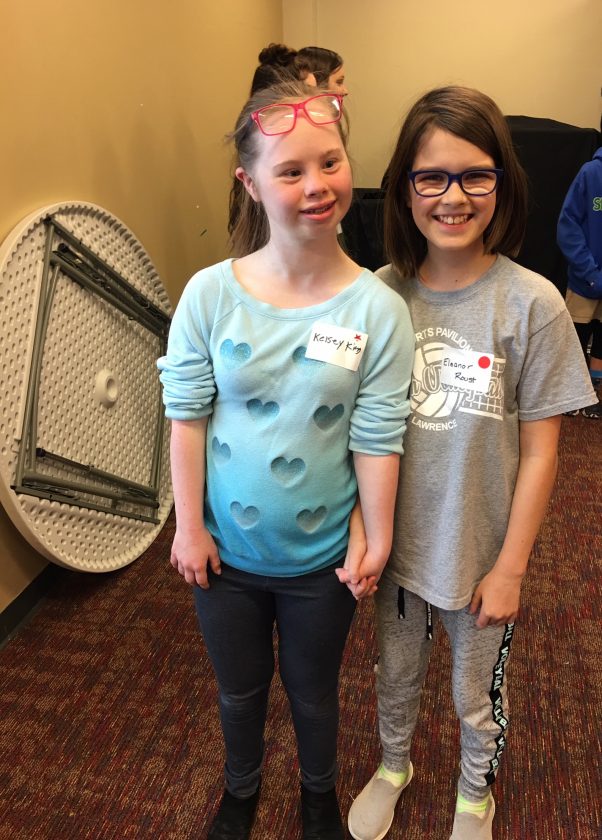 Kelsey King, 15, and Eleanor Roust, 11, immediately connected during the first rehearsal of Penguin Project production of Disney’s “Aladdin Jr. at Theatre Lawrence. The national program guides community theaters in offering programs for those with special needs who are paired with a mentor to help them.

During the next couple of rehearsals, Kelsey will be paired with different mentors until they find the perfect match, said Hailey Gillespie, youth education director with Theatre Lawrence. It could be that the match is Kelsey and Eleanor.

That’s how it works in the Penguin Project, a national program that guides community theaters in offering productions for people with special needs, who often feel isolated and have limited opportunities to get involved in the performing arts.

In February, the founder of the Penguin Project, Dr. Andrew Morgan, a primary specialist for children with special needs in Peoria, Ill., was at Theatre Lawrence for an introductory meeting. Despite the heavy snow that night, 17 prospective performers and 23 mentors, caregivers and family members braved the weather. On Wednesday night, even more interested people showed up.

Mary Doveton, executive director of Theatre Lawrence, first learned of the Penguin Project from her friend Morrie Enders, executive director at the Lincoln Community Playhouse in Nebraska. Enders was on hand Wednesday night and spoke with the artists, mentors and family members.

“You’re going to love it,” said Enders, wearing a shirt with a big penguin on the front. He had the artists and mentors get into a circle to do a group activity that would loosen them up for the rehearsal. 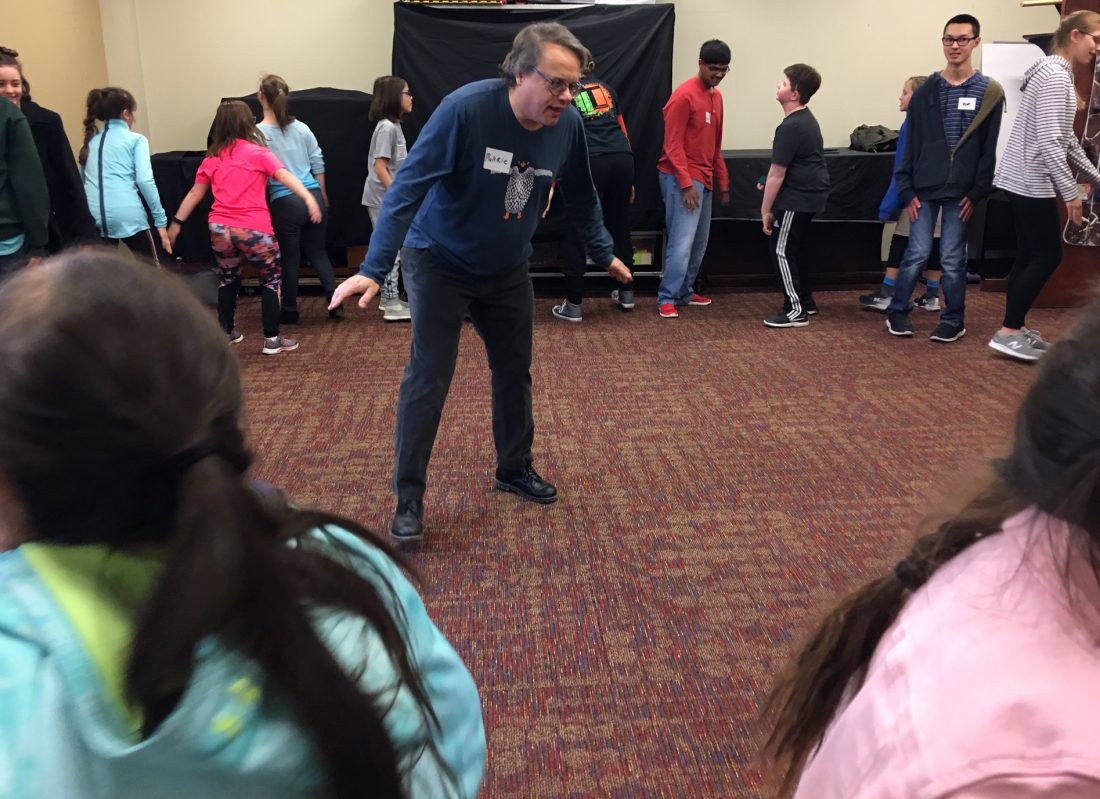 Morrie Enders, executive director of the Lincoln Community Playhouse in Nebraska, leads the artists and mentors in an exercise in walking like a penguin during the first rehearsal for the Theatre Lawrence production of “Aladdin Jr.” The Lincoln theater has been participating in the Penguin Project for the past six years and Enders was in Lawrence to help kick off the program.

“There is a reason we have been doing this for the past six years and will do it forever,” he said.

One boy stood to the side of the group, preferring to do his own dance moves. And one teen left the room after each song, perhaps in search of his mother, Enders said. That’s OK, he added — working with people who have different social cues is part of the project.

For some, Gillespie said, it took some time to get comfortable with rehearsing. But Enders said that’s normal at this point in the production.

“This is very early on,” Enders said. “As the program works into a pattern and they start to get a buddy, the human connection will change how the rehearsal goes. The kids will start focusing more.”

There are no tryouts for the production. Through the coming weeks, the plan is to pair the artists with different mentors and get a feel for who works best together and where each artist’s strengths might be for the different roles, Gillespie said.

Kelsey said she doesn’t care whether she gets a leading role.

“I’ll be happy with whatever role I get,” she said.

There are months of practice ahead for the cast. Opening night isn’t until Friday, June 28.

At the concession booth at the Lincoln Community Playhouse, Enders said they sell Kleenex. Tears flow in the audience during their Penguin Project productions, he said.

“It’s very moving to see the bond between the artist and mentor,” Enders said. “That’s the backbone of the project. I call the whole thing social change masqueraded as a theatrical event. It’s about creating friendship and breaking down barriers.”