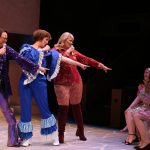 From left, Robin Daniel Michael, Kelli Szrot and Secily Rees all point to Haley Roberts during a dress rehearsal of "Mamma Mia!" on Wednesday, June 5, 2019, at Theatre Lawrence.

Theatre Lawrence hopes to take its audience on a musical vacation when its production of “Mamma Mia!” opens on Friday.

Director Mary Doveton said the show’s popularity comes from the combination of the music — a collection of hit songs by the band ABBA — and the classic love story theme. The musical, which was adapted into a film by the same name in 2008, follows Sophie, a woman who never knew her father, as she invites three of her potential dads to her wedding on a Greek island. Drama ensues as her mother, Donna, discovers the plot and must contend with the three men while preparing for the wedding.

“The melodies, the harmonies, it has such a universal appeal,” Doveton said. “It’s kind of the ultimate feel-good musical.”

Tasked with bringing the audience to the musical’s Greek island setting, set designer James Diemer wanted the scenery to evoke a feeling of vacation and escape.

“I want people to look at this and say, ‘I want to go there!'” Diemer said. 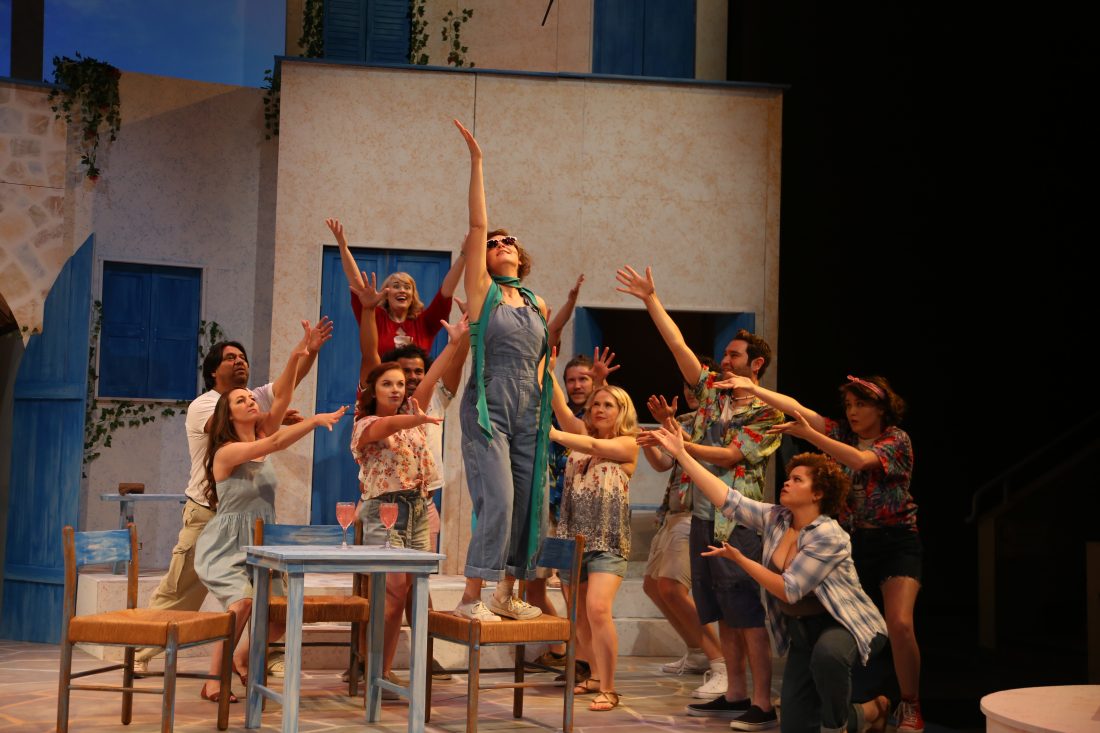 Cast members of “Mamma Mia!” strike a pose at a rehearsal Wednesday, June 5, 2019, at Theatre Lawrence.

Kelli Szrot, who plays Donna, said her friends pressured her to come out of a 15-year acting hiatus to audition for the role.

“It was one of the best decisions I’ve made in a long time,” Szrot said.

Szrot said the role has been challenging because the script does not give Donna much character development, which left her to fill in the gaps. In the end, Szrot said she found a lot in the character she could connect with.

“Personalitywise, I’d say Donna and I are pretty close,” Szrot said. “She’s very authentic and values those around her, and mostly she’s just a lot of fun.”

Hank Rischar, who plays Sam Carmichael, one of the three potential fathers invited to Sophie’s wedding, said his role was challenging, but that it helped him learn about himself as an actor.

“My wife and daughter are big fans of ‘Mamma Mia!’ and they encouraged me to come out,” Rischar said. “As a middle-aged man, there were three roles for me, so I thought, ‘Let’s give it a try!'”

Doveton said the greatest challenge in directing the show has been making the acting, chorus, orchestra and set work together. She said the moments where all of the disparate elements combine are unforgettable.

“I want (the audience) to feel like they’ve been to the best party of the summer,” Doveton said.